Mamata warns and calls for peace 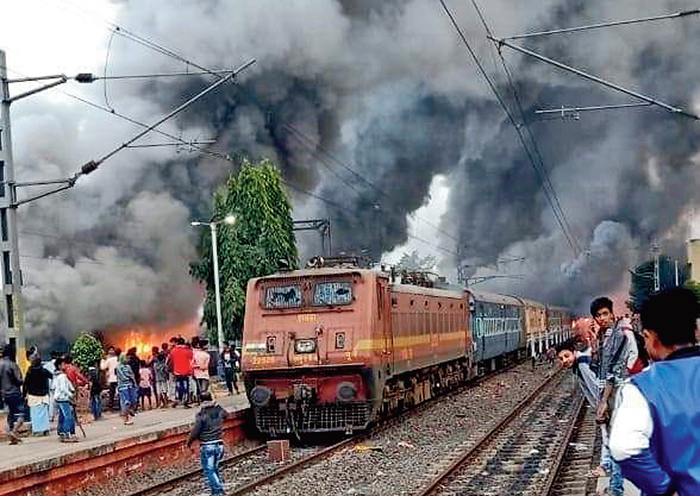 Empty buses and trains were set on fire in Howrah and Murshidabad, and at least three more districts in Bengal were affected on Saturday by protests against the amended citizenship law, prompting chief minister Mamata Banerjee to issue a fresh appeal for peace and warn against fundamentalist parties trying to stoke violence.

In the morning, alerted by intelligence agencies to the possibility of violence, the chief minister had said harassment of common people in the name of protests would not be tolerated.

But violence and arson were reported in Howrah, Murshidabad, Birbhum, Malda and North 24-Parganas. (See Metro)

With the situation tense and the protests often spilling onto railway tracks, South Eastern Railway could not resume full services on Saturday. Several trains were cancelled, inconveniencing many passengers.

The situation appeared less volatile in the evening but the administration is worried about vested interest fanning the flames afresh.

The statement by Mamata in the evening said: “We urge all to protest against CAB (as the amended law was known when it was a bill) and NRC (National Register of Citizens) through democratic means.

“Some political parties with religious fundamentalism and communal intentions are deliberately trying to stoke chaos and violence. I appeal to all not to fall in their trap. Please maintain peace and calm. It is my earnest appeal to all.”

In the morning, Mamata had used social media to urge the agitators to maintain peace and “protest in a democratic manner”, signalling her government would not allow any lawlessness.

“Protest in a democratic manner. Don’t take the law into your own hands. Don’t block roads or railway tracks,” the chief minister wrote on Facebook.

In the morning, the protesters brought the Kona Expressway in Howrah to a standstill with a roadblock in Salap. Later, clashes with the police were reported from parts of the district.

Several buses --- the count varied from 5 to 10 --- were set on fire in Howrah district alone. The ticket counter at Sankrail railway station was vandalised and torched.

Senior government officials held meetings at Nabanna through the day to monitor the protests.

“All the police superintendents were asked to deal firmly with the protests. Some people were detained in a message that the administration would not tolerate violence,” an official said. “By evening, the situation was under control. It’s expected that normalcy would return from tomorrow.”

After images of the violence were circulated on social media, a political slugfest began between the ruling Trinamul Congress and the BJP, which held Mamata responsible for the unrest.

Firhad Hakim, Calcutta mayor and state urban development minister, had earlier in the day delivered a stern warning against violence or vandalism.

“Don’t create trouble for the common people.… Some elements backed by the BJP tried to create trouble and damage public property. The government will act against those who try to take the law into their own hands,” Hakim said.

Starting Monday, the chief minister is scheduled to lead a series of rallies against the Citizenship Act and the NRC.