Consulate in Frankfurt bows to protesters 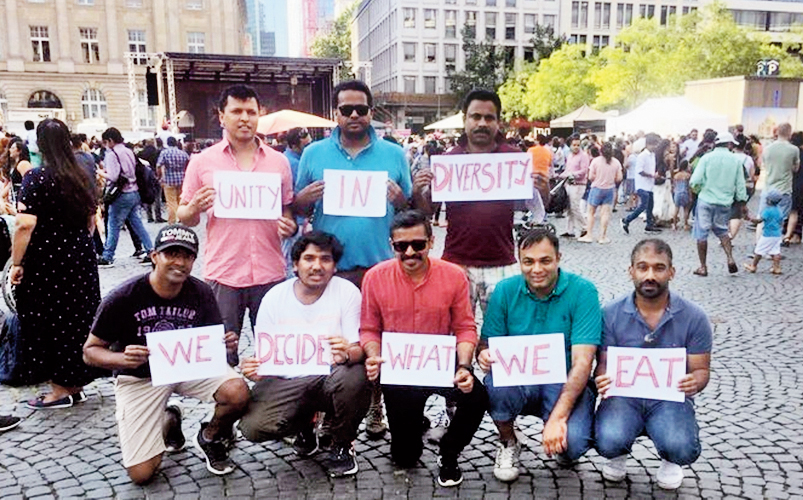 A Malayali association based in Frankfurt was last week forced to remove a beef dish from a food festival the consulate-general of India had organised after supporters of a Hindu Right-wing group threatened to create a “ruckus”.

The Kerala Samajam Frankfurt — an organisation of Malayalis in the German city — said the consulate asked them to remove the beef curry from the menu at the Indian Fest held on August 31.

The curry had been listed with Kerala porotta, a flatbread popular in the southern state.

The Samajam later posted a statement on Facebook detailing the controversy.

“When some people with vested interests raised objection and threatened to make ruckus during the event, CGI Frankfurt kindly requested us to revise our menu so that the event could be held without any incidents,” said the statement posted on Sunday.

The Samajam also mentioned that ahead of the fest, “all Indian organisations were explicitly asked to present the common delicacies of each state with only restriction being for alcohol”.

The matter has since gone viral, with people voicing outrage at what they called the involvement of Indian Right-wing groups in the “spread of intolerance” to foreign soil.

“Interference of right wing extremism is spreading intolerance within and outside India,” Donny George, a Frankfurt resident, wrote in a Facebook post in Malayalam.

“Kerala Samajam had included Kerala’s traditional food of beef curry and porotta in the menu for the food festival organised by the India consulate. The Vishwa Hindu Parishad gave a call for protest once they got to know about it,” he said.

“Kerala Samajam boycotted the event after being asked to remove beef from the menu.”

Samajam members later protested outside the fest venue by holding placards that highlighted freedom to have any food and India’s unity and diversity, George wrote.

A petition titled “Secularism and Peace” has been started on the portal change.org and has till date been endorsed by 625 people.

Neither George nor the Kerala Samajam Frankfurt had responded to messages from The Telegraph till Tuesday evening.

An email to the Indian consulate-general in Frankfurt didn’t elicit any response either.

It was, however, clear that the anti-beef campaign ahead of the food festival had a precursor back in India.

Suresh Kochattil, a member of the BJP’s social media cell, had tweeted against the inclusion of beef in the menu on August 30, a day ahead of the event.

“So, Consulate General of India, Frankfurt will be officially associating itself with Kerala Samajam in selling Beef Curry at the India Fest. What a letdown,” he had said in the tweet marked to the official handles of Prime Minister Narendra Modi, Union home minister Amit Shah, RSS chief Mohan Bhagwat, foreign minister S. Jaishankar and the consulate-general of India in Frankfurt, among others.

Kochattil is the same man who had kicked up a row when Kerala was battling a devastating deluge a year ago. After a visit to the flood-hit state, Kochattil had released an audio message literally asking donors not to send any money or material to Kerala since those affected were rich.

Kerala’s troll army and Malayalis in general had then put him through the shredder for spreading lies that suited his party that doesn’t enjoy much support in the state.

Indians based in Frankfurt slammed those responsible for pulling out the beef curry from the Kerala menu.

“I don’t even eat beef, but what happened here was ridiculous,” Kiran Sasikumar, a signatory to the online petition, commented.

“India is more than just the Hindi belt and no one group has an authority on Indian culture/religion. This pernicious and viral stand of Hindutva will destroy Hinduism from within…,” Sasikumar added.

Another signatory, Nikhil Iqbal, wrote in solidarity with the Samajam. “Remembering those days when I was in Germany... we used to sit around the table in canteen with beef, chicken, pork, pure veg, all served on the same table with no offence to any one and respecting each other’s food habits,” Iqbal wrote.