BBC, government at odds on protest 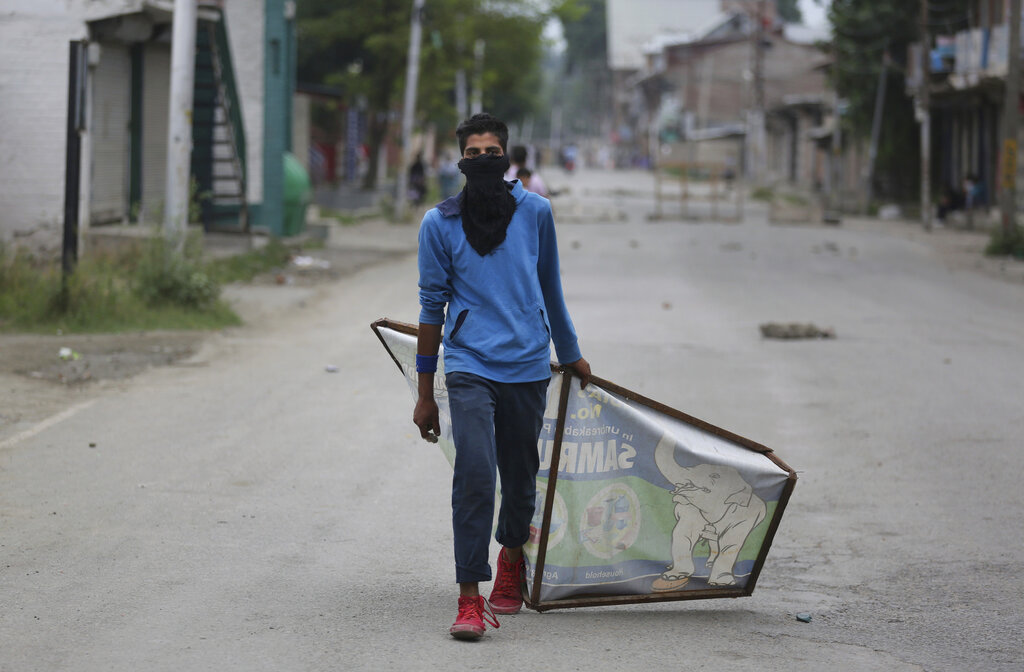 A Kashmiri protester drags an advertisement hoarding to be used as a shield during a protest in Srinagar on August 9.
AP
Imran Ahmed Siddiqui And Reuters   |   Srinagar   |   Published 10.08.19, 09:16 PM

The BBC on Saturday shared video footage of a large protest that it said was held on the streets of Srinagar on Friday and added: “The Indian government said this demonstration didn’t take place.”

The short video shows men running and ducking as the sound of firing is heard and smoke rises in the background, probably from teargas; a large number of protesters marching with banners that say: “We want freedom” and “Abrogation of Article 370 is not acceptable to us”; and a rally on a ground where the speaker asks, “What do we want?” and the crowd chants back, “Azadi (freedom).”

BBC, which tweeted this footage, said thousands took to the streets at Soura in Srinagar after Friday prayers in the largest protest after India scrapped special status for Jammu and Kashmir. The news channel said it witnessed the police opening fire and using tear gas to disperse the crowd. “Despite that, the Indian government has said the protest never took place,” it said.

Union home ministry spokesperson Vasudha Gupta had at 12.20pm tweeted a statement denying a Reuters report that 10,000 people had protested in Srinagar on Friday. “A news report originally published in Reuters and appeared in Dawn claims there was a protest involving 10,000 people in Srinagar. This is completely fabricated & incorrect. There have been a few stray protests in Srinagar/Baramulla and none involved a crowd of more than 20 ppl,” Gupta tweeted.

At 2.04pm, Nicola Careem, the South Asia bureau chief of the BBC, posted the video with this tweet: “Despite government saying reports of protests in Saura were completely fabricated, see exclusive BBC footage here for the truth. Thousands marched, police fired on protesters, dozens injured.”

Careem tweeted again at 5.09pm: “Just to clarify this was shot yesterday at 1530 after Friday prayers in Soura in Srinagar in Indian administered Kashmir. We will be releasing the raw footage soon.”

The Washington Post also reported quoting eyewitnesses that police fired pellet guns at the “protesters gathered by thousands after Friday prayers in Srinagar....”

At 4.45pm, this newspaper sent a question to Gupta on WhatsApp asking about the BBC video. But the home ministry spokesperson had not responded till late at night.

Nor has the ministry responded to media reports that several protesters hit by pellets were being treated at SMHS hospital in Srinagar.

Since the Centre announced on Monday that it had stripped Jammu and Kashmir of its special status under Article 370 and that the state was to be split into two Union Territories, there has not been a single briefing by the administration on the situation in the Valley.

On Saturday night, Rahul Gandhi emerged from the Congress Working Committee meeting to say that discussions on choosing the new party president had been interrupted by reports “that things in Jammu and Kashmir are going very wrong”.

Reuters on Saturday said its report on Friday that at least 10,000 people were involved in the protest was based on an estimate provided by a police source and backed up by two eyewitnesses. It said another official source on Saturday gave Reuters the same estimate. It referred to Gupta’s tweet and said the agency was unable to reach her for further comment.

Signs of Friday's protest were visible in the Soura area of Srinagar on Saturday, it said. Large rocks, wooden platforms, poles and boulders blocked the main street, and shops were shut.

Late in the night, J&K police issued a statement by Twitter that said: “Chief Secretary and DGP Jammu & Kashmir request people not to believe fabricated and motivated news. No firing incident has taken place in Kashmir over 6 days…. The police have not fired a single bullet so far in 6 days. The situation is calm, people are cooperative and restrictions are being relaxed to ease the situation. Srinagar and other towns were full of traffic and people busy with Eid shopping today.”

Policemen in the Valley, who used to carry assault rifles, have this week been seen carrying only batons. The paramilitary forces are carrying firearms.

Reuters said that in the Bemina area of western Srinagar, around a dozen residents said security forces had thrown stones and bricks at homes and cars in retaliation to the protests, breaking windows as a result.

The government did not immediately respond to a request for comment about the alleged incident. Reuters was not able to independently verify the residents’ claims.

“Why is India doing this to us?” said an elderly man, Mohammed Sultan, whose truck that he used to transport goods and earn a daily wage was damaged. Pointing to his two young grandsons, he said: “How do I do my work and feed these people now?”