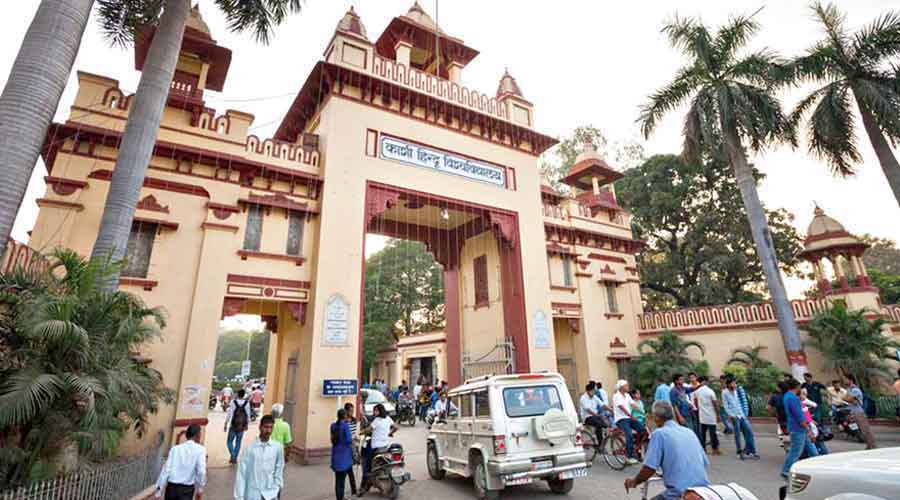 What the Centre has been busy with, instead, is promoting Hindutva in the university, located in Prime Minister Narendra Modi’s parliamentary constituency of Varanasi, they suggested. The Kashi-Tamil Sangamam, a month-long event to celebrate the historical ties between Tamil Nadu and Kashi (Varanasi), began at BHU on November 17.

On November 19, Modi addressed delegates, including some who had come from Tamil Nadu, at the event. On November 21, a batch of student delegates from Tamil Nadu visited Allahabad, about 130km from Varanasi, to see the confluence of the Ganga and the Yamuna, a holy site in Hinduism. A media release issued by the central government’s publicity arm, the Press Information Bureau (PIB), said that on reaching the Sangam Ghat, the students were “much excited” and were seen chanting “Har Har Mahadev” and “Bharat Mata ki jai”.

“Select members of the district administration escorted the students’ delegation to various places of interest in and around the city of Prayagraj (Allahabad), namely,  Akshayavat (‘the indestructible banyan tree’, which is a sacred fig tree mentioned in Hindu mythology), the Chandrashekhar Azad Park, Prayagraj Museum and Shree Swaminarayan Mandir,” the release said. “Concluding their visit at ‘Sangam Nagri’, the students’ delegation from Tamil Nadu left for the ancient and holy city Ayodhya.”

In another release, the PIB said that members of a large delegation from Tamil Nadu had gathered at the various Ghats of Kashi on November 21 as part of the Kashi Tamil Samagam. “After taking a holy dip at the Ghats with chanting of ‘Har Har Mahadev’, they visited Shri Kashi Vishwanath temple in various groups. They were also seen relishing Banarasi cuisines and busy checking and buying various handcraft products,” the release said.

A faculty member at BHU who did not wish to be quoted said Kashi had historically been a centre of debate and discussion.

“Scholars used to come here to debate and learn from each other. But there has been no attempt to showcase such interactions (as part of the Samagam). What is happening now is the showcasing of Kashi purely for promoting Hindutva. It is being done to take political advantage,” the faculty member said.

Vishwanath Pandey, a former officer on special duty at BHU, said the executive council (EC) needed to be constituted for smooth functioning of the university. He said that in the absence of EC approval, the university was being forced to sit over the appointment letters of about 150 faculty members. Under the BHU Act, the President of India, who is the Visitor of the university, appoints the eight members of the executive council on the basis of recommendations from the Union education ministry.

The Telegraph filed an RTI application in July this year with the education ministry seeking the reasons for the delay in the appointment of EC members. The ministry passed the application on to BHU. The designated BHU official gave an evasive reply, saying: “The members of the EC are to be nominated by President of India.”

Pandey said: “Nearly 500 faculty posts are vacant at BHU. For that, the government should take steps to constitute the EC.” BHU became the first university to start a master’s course in Hindu Studies in 2021. In 2018, it had set up a Vedic Science Centre to “synthesise” Vedic wisdom and modern science.