Advertisement
Home / India / Ayodhya: A battle for the defence of the highest values...

Ayodhya: A battle for the defence of the highest values... 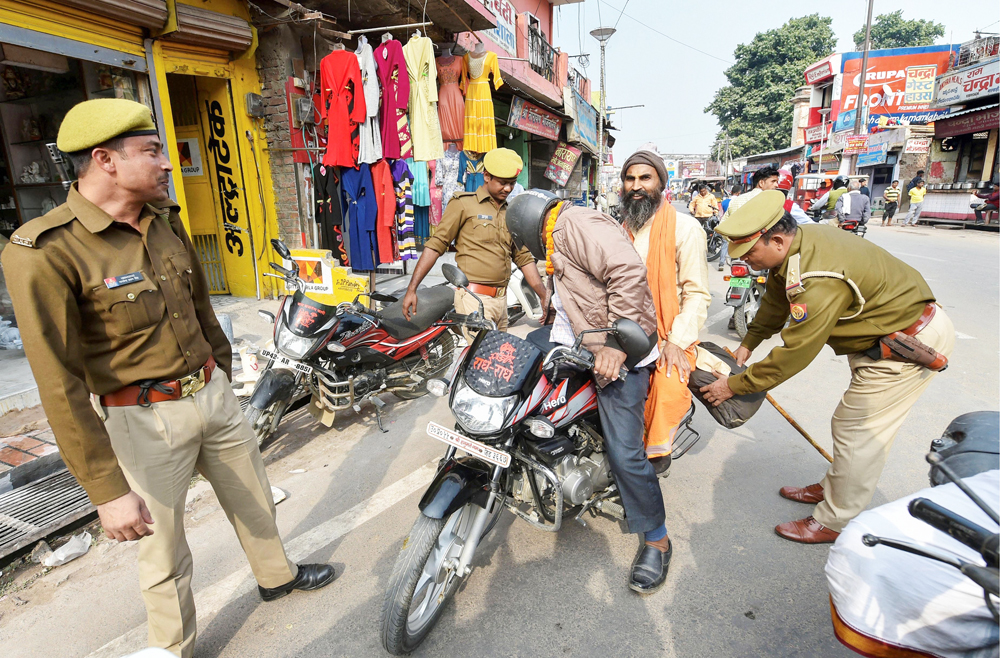 Policemen conduct search of a motorcyclist at a barricade, as part of security measures on the eve of the 27th anniversary of the Babri Masjid demolition, near Hanumangarhi area in Ayodhya, Thursday, December 5, 2019.
(PTI)
TT Bureau   |   Published 05.12.19, 09:27 PM

The following is a statement issued in the form of a letter to the people of India by 46 retired bureaucrats 27 years after the demolition of the Babri Masjid. The anniversary on Friday is the first since the Supreme Court delivered the verdict in the Ayodhya land case and proposed a temple on the disputed site.The bureaucrats had come together in 2017 to form Constitutional Conduct to speak out on issues that undermine the Constitution.

We, a collective of retired civil servants deeply committed to the values and guarantees of the Indian Constitution, share with our fellow Indians our extreme grief and deep concern about where India stands today, 27 years after the demolition of the Babri Masjid in Ayodhya on 6 December, 1992.

We recall that 6 December is also the anniversary of the day on which the man who led the creation of one of the finest constitutions in the world, Dr Bhimrao Ambedkar, left this world.

The battle for the land on which the medieval mosque in Ayodhya stood was at its core a battle for the defence of the highest values of this Constitution.

This was not simply a title dispute over a tiny piece of land in a dusty small town. It was not even a contest between a medieval mosque, now razed, with a grand temple, still imagined. It was a dispute about what kind of country this is and will be in the future, to who does it belong, and on what terms must people of different identities and beliefs live together in this vast and teeming land.

We feel intense anguish because 27 years after the mosque was demolished, those who were responsible for this crime which tore India apart and led to the highest levels of communal bloodletting after the Partition riots, have still not been punished…. Instead, many of those who led and participated in this assault not just on a mosque but on India’s constitutional morality, have held some of the highest offices in this country.

We worry also that the recent judgment of the Supreme Court of India in effect rewards this grave crime. It also creates a false and illusory notion that a verdict favouring those who claim to speak for the majority community can result in peace and reconciliation and everyone should move on, injustice notwithstanding.

In this deeply troubling moment in the journey of this country which we love, we contest resolutely the message that it seems to convey to India’s religious minorities that their claim to this country and its democratic institutions is subordinate to anyone. We would like to recall the famous dictum ‘Freedom is the outcome of the tranquillity of peace and peace emanates from justice’. Freedom and justice are the soul of our Constitution.

This is a time when every Indian should recall Mahatma Gandhi’s last fast, two weeks before he was assassinated. One of his three demands was that the mosques and dargahs in Delhi in which Hindu idols had been inserted should be returned respectfully to the Muslims.

Hinduism, he said, would be emptied for him of meaning if a single place of worship of another faith was desecrated in the name of the Hindu faith.

We who sign this letter to the Indian people include a Jain, Hindus, Muslims, Christians, Sikhs, atheists and agnostics. We are together convinced that true religion never teaches violence and hate of another.

Therefore, on 6 December, we first express our collective agony and atonement that a place of worship was pulled down with such hate. We also pledge that we will not allow our great Constitution to be emptied of its soul.