Advertisement
Home / India / At Oxford, a stereotype on Partition is busted

At Oxford, a stereotype on Partition is busted

The motion that "This House Regrets the Partition of India" has been carried by the Oxford Union Society by 108 votes to 76. 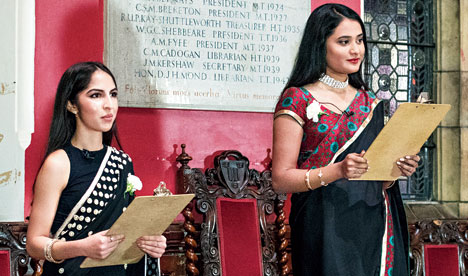 London: The motion that "This House Regrets the Partition of India" has been carried by the Oxford Union Society by 108 votes to 76.

The debate took place nearly three years after Shashi Tharoor's sensational speech in May 2015 in support of the motion that "This House believes Britain owes reparations to her former colonies".

This time both sides expressed sorrow at the horrors that accompanied the Partition of India.

But those who spoke in favour of the motion - Sabriyah Saeed, an undergraduate from Somerville College and the Oxford Union's librarian; Mahatma Gandhi's grandson, Professor Rajmohan Gandhi, an academic at the Illinois University; and the current president of the Indian Journalists' Association, Ashis Ray - took the view that Hindus and Muslims could have lived together.

The opposition's case basically was that it was better to accept the fact of the Partition, however traumatic it had been - and then move on.

Sabriyah was not the only one in a sari - "Madam President" Laali Vadlamani, of Trinity College, wore one, too.

The debate took place in early March but its contents have just been made available by the Oxford Union.

The motion considered by the House was as follows: "Over 70 years ago, the world witnessed one of the largest forced migrations in history, with the movement of 14 million people across a divided and soul-searching nation. Do we regret the Partition for the onslaught of religious violence and vast loss of life, or has the Partition given hope and opportunity for an independent future?"

Sabriyah's passionate and eloquent contribution makes clear that younger Pakistanis do not always subscribe to the party line on India.

"Partition is something to regret. Consider the deep-rooted animosities that still plague India and Pakistan," she said.

"I have thought long and hard about what I should say in this debate, primarily because I knew that should I plan to visit India or Pakistan in the future, my visa status may be a point of difficulty. But as the only Pakistani speaking in this debate, I feel a sense of responsibility - an even greater sense of responsibility now that I have decided to be on the side of the debate which is not typically or traditionally Pakistani.

"However, to confine this debate to the dynamic of India versus Pakistan I think would be ignorant of the nuance and immense complexity of the Partition."

In opposing the motion, Khursid, an Oxford man himself, quoted Dr Aziz's emotional tirade directed against Cyril Fielding in E.M. Forster's A Passage to India: "'Down with the English, anyhow, that's certain, clear out you fellows, double quick, I say - we may hate one another but we hate you most... we will drive every blasted Englishman into the sea... and then you and I shall be friends.'"

He made the point: "Some relations are like Aziz and Fielding: harmony comes but it comes after partition."

Khurshid was supported by Mukherjee, who began: "I am a humble practitioner of the historian's craft and my comfort zone is within the walls of the archives. And it is that perspective I bring to this debate.

"I oppose this motion because the Partition did indeed become unavoidable in 1947... and it is ahistorical to regret something to which there was no alternative."

In supporting the motion, Gandhi partly blamed Britain and specifically Winston Churchill for the Partition.

"In the Partition we live to regret, Great Britain played a role. In March 1945, four months before he would lose office as Prime Minister, Winston Churchill instructed Archibald Wavell, India's viceroy at the time, to ensure that India was divided into 'Hindustan, Pakistan, Princestan, etc'.

But "to welcome that Partition is to imply that people with different backgrounds and different bloodlines cannot live together in one nation - a regressive suggestion", he argued.

"The corollary that those possessing a common religion or common race enjoy blissful companionship in their homes, nations or regions is, well, hilarious.

"I am sure this House will want on the streets of Planet Earth Hindus, Muslims, Christians, Sikhs and Buddhists walking side by side for peace. Once upon a time the tribe was our world. Today the planet is our village. Oxford has cultivated over its long and wonderful history the seeds of dialogue and reconciliation. This House will want to learn from and to regret the Partition of India."