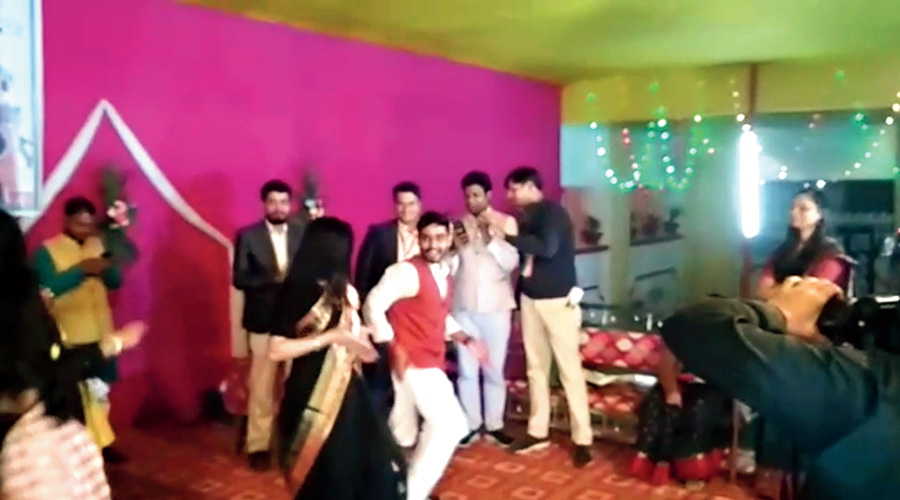 The governor — chancellor of all state universities — has also suspended principal Premendra Ranjan Singh, indicted by a probe for “cake-cutting” and “inserting item songs and dance” into an event held on the birth anniversary of India’s first President, Rajendra Prasad, after whom the college is named.

Chauhan, a former Uttar Pradesh BJP leader with roots in the RSS, has further suspended three professors of Jai Prakash University, to which Rajendra College is affiliated, on the charge of failing to carry out an “impartial” inquiry into the dance controversy and “giving benefits” to the dancing teachers. The trio were part of a probe committee formed by JPU vice-chancellor Faruque Ali.

A letter issued to Ali by joint secretary Raj Kumar Sinha from the governor’s secretariat says the 12 teachers were punished for “gross misconduct and dereliction of duties” and mentions the dancing.

Several academics have castigated the February 13 action against the teachers as “unwarranted moral policing” by self-appointed “guardians of our culture”. The presumption is that the real charge, unsaid but left hanging in the air, is that the dancing constituted obscene behaviour.

“We danced for just about five minutes. We were dancing with our students, colleagues and family members — wives, daughters and sons. How can anyone dare think there was any obscenity? It was a normal, happy function,” one of the suspended assistant professors said.

Another said: “We had participated in such events as students at reputable universities across the country. This is unwarranted moral policing by people who consider themselves the guardians of our culture.”

A few purported video clips of the event that The Telegraph has seen do not show anything that would have been out of place at a family wedding.

The suspended assistant professors are from the college’s psychology, chemistry, commerce, economics, English and Hindi departments.

The action was taken on the basis of social media videos because a few days after the event, purported burglars made off with the college’s digital video recorder which contained recordings of the event.

Teachers at the college said the social media clips show some of the 12 teachers dancing. The songs played include the Haryanvi number Teri Aakhya ka yo Kajal by Sapna Chaudhary and London Thumakda from the Bollywood movie Queen.

A suspended teacher said the dancing had begun after the chief guests had left, with some teachers joining in at the students’ request.

After the video clips went viral, Ali formed a three-member probe committee with professors Ashok Kumar Jha (dean, faculty of science), Uday Shankar Ojha (dean, student welfare) and proctor Kapil Dev Singh on December 5. The committee visited the college and asked teachers to write about the event. Twelve did but many others refused.

On the basis of the committee’s report, Ali handed the 12 assistant professors increment and dearness allowance deductions.

On February 13, the increment and DA deductions were withdrawn and the suspensions imposed on the governor’s orders. All the 16 academics suspended were given 15 days to explain their conduct.

Sinha’s letter to Ali says the chancellor (governor) had acted after reviewing the two-member panel’s report.

“He (the principal) showed least respect for the university laws and without having a proper approval, organised the birth anniversary and by inserting item songs and dance in the programme on the stage under the banner of Dr Rajendra Prasad Jayanti Samaroh, as well as, cake-cutting ceremony in his office chamber, deserves to be proceeded against for such an unethical and non-moral practices,” the panel report, a copy of which this newspaper has seen, says.

The teachers’ association of the college, which has a faculty strength of 48, said in a statement: “Can a dance performed with family members and children be obscene?... If so, who has the moral authority to decide?”

A professor at the college said the suspended assistant professors had all joined the institution within the past three years and helped clean up many malpractices.

“They stopped outside interference in admission, classes and examinations, ensured discipline and regular classes and attendance, banned outsiders from loitering on the campus, stopped copying at exams,” the professor said.

“Just when the college was looking like a proper place of education after decades, they have been suspended. There’s the hand of the local mafia and politicians in this.”

Asked what made the songs and dances obscene and who should be the judge, the governor’s PRO, S.K. Pathak, said on Sunday evening: “I will put the questions before the governor and get back to you if he responds.”

There was no response till Monday night. The vice-chancellors who were part of the two-member probe committee refused to be quoted.

But one of them said on the condition of anonymity: “The governor took an interest in the case and sent us. We were just a fact-finding committee and we reported the facts. The governor is monitoring everything.”

MLC Kedar Pandey, who won from the Saran teachers’ constituency that covers Rajendra College and JPU, questioned the “harsh punishment”.

“Several departments in the college have virtually shut down. I have requested Raj Bhavan to be sympathetic towards the teachers. A warning should have been enough if the higher-ups thought they had committed anything wrong,” Pandey said.