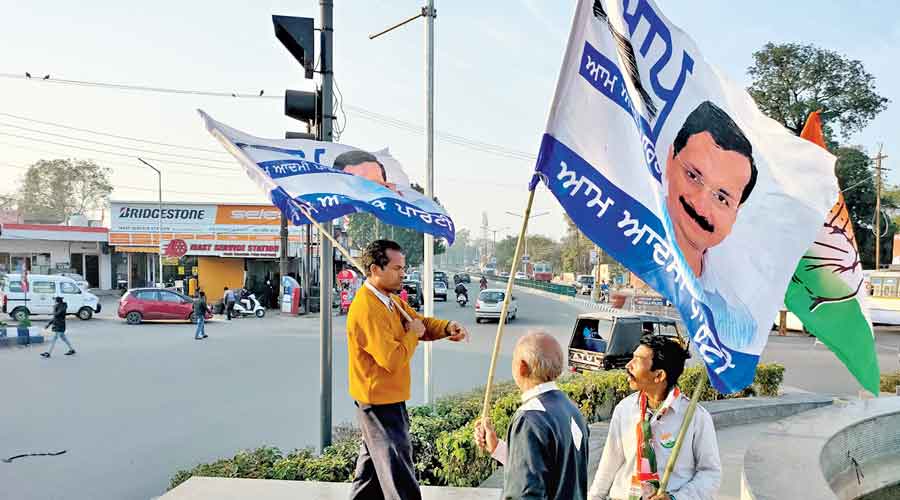 The shifting political tides have not been kind to former chief minister Amarinder Singh, who quit the Congress to start his own Punjab Lok Congress — a junior ally of the BJP in the state.

Voters here who spoke to The Telegraph had to be asked what they thought about the “Captain” — a candidate from the city — for them to even mention him in the context of the February 20 Assembly elections.

“Things are just so expensive,” Preetinder Kaur, a hotel manager, said. “The government made buses free for women but hiked the general fare, so a family ends up spending the same amount on transport. The Congress won’t come (to power) this time; the AAP is going to win.”

It was Amarinder — a former army captain and scion of Patiala’s erstwhile royal family — who had waived the bus fare for women.

Reminded of it, Preetinder said: “Look at the road outside. Will anyone say that this mess is in the seat of a maharaja? Farmers sat for so long near Delhi and so many died in the cold because of the BJP’s laws. And the Captain is now with them.”

Amarinder is caught between irrelevance and the anger directed at ally BJP for the now-repealed farm laws, vilification of Punjabi peasants during the agitation, and the party’s charge that current chief minister Charanjit Singh Channi had endangered Prime Minister Narendra Modi’s life by failing to remove protesters from his convoy’s route in Ferozepur last month.

Rajinder Ahuja, a restaurateur, lost his sister and brother-in-law in Delhi for want of oxygen during the pandemic. Union home minister Amit Shah’s speech here on Sunday — in which he blamed the Delhi government’s new liquor policy for an increase in addiction — infuriated him.

“In fact, had the Centre not tied the hands of the AAP government they would’ve handled the pandemic much better and my niece wouldn’t have been orphaned.”

Pointing at the sewage on The Mall, the city’s high street, he said: “Respect for the Captain is not an issue in these elections — he had enough time to perform but I at least can’t see any improvement in the city.”

Amarinder, however, still commands personal goodwill among some, especially families that were resettled here after Partition by his father Maharaja Sir Yadavindra Singh, the last ruler of the principality.

“I have voted for the Congress all my life,” 55-year-old Balbir Chand, who sells fruits near the imperial Baradari Gardens, said.

“The Captain may even have won had he stayed with the Congress. Channi has worked a lot in the short time he has had. But my vote is for the AAP.”

Many voters aired this conflicting stand — appreciation for Channi, vote for the AAP.

Chand has lost his only child — 30-year-old Vikram, a PhD scholar — to cancer. Many of his son’s former classmates are now his customers.

“There are so many qualified youths who are without jobs or are working as guest faculty for a pittance. Channi could not regularise them despite his efforts,” he said.

“What’s the point in having a government that can’t get things done? It’s not enough to be a nice guy. If the AAP can make better schools in Delhi and regularise jobs there, they can do it here as well. Ik mauka Bhagwant nu (Give Bhagwant a chance).”

In December, Punjab and Haryana High Court had stayed the Channi government’s move to fill 1,158 vacant assistant professors’ posts with people teaching on temporary contracts. The court is hearing a plea that alleges norm violations in the matter.

The AAP too had promised to regularise all government jobs in Delhi but has made little headway in the matter in the capital, where it has been in power since 2015. As of 2019-20, Punjab’s unemployment rate of 7.4 per cent is higher than the national average of 4.8 per cent.

Chaman Lal, retired head of the department of Hindi at Punjabi University here, said: “In 2014, even a feudal constituency like Patiala had elected the AAP’s Dharmavira Gandhi to the Lok Sabha. He defeated the Captain’s wife, Preneet Kaur. Gandhi may have turned against the AAP now, but his victory showed that given a viable alternative, even a conservative place like this is willing to reject traditional loyalties.”

The Congress has fielded former mayor Vishnu Sharma. Chand likes him but complained that municipal staff harassed street vendors like him.

“They keep forcing us to shift our place of sale. How many times can we shift and how much bribe can we pay? The AAP will end this arrogance,” he said.

At the Fountain Chowk nearby, workers of the AAP, Punjab Lok Congress and the Congress were waving flags. Except for the AAP workers, the rest identified themselves as day labourers hired to campaign.

“We don’t need to be paid to celebrate victory. Can’t you feel it?” the AAP squad’s leader, Sardar Pankaj Das, said.

“The times are changing. We working people finally have a voice, a loud voice.”

Hawker Balwant Singh chimed in: “The farmers’ movement has taught us to question things. Channi may be our friend but we have not got answers from him. Once the AAP comes, we will question them as well.”

Author Amandeep Sandhu said that in 2017, the AAP’s popularity had peaked a week before the polls, especially in the populous Malwa belt where Patiala is located, before the Congress regained ground.

“While the men posture and shout, the women will decide,” Sandhu explained.

“Unlike before, most women do not vote the way their men tell them to. (This has been true) for at least a decade now…. Last time, the women had decided that the Captain was their saviour.”

Sahajmeet, a guest teacher at Punjabi University, said she was yet to make up her mind fully.

“I used to vote for the candidate who was the most famous or most admired in the circles I used to frequent. But in the past few years, with the pandemic, the farmers’ protest and the question of equality of the genders — and with time on my hands, I had the chance to read extensively, which was simultaneously backed by experience —I had the chance to witness things up close,” she said.

“I’m leaning towards Nota (the none-of-the-above option) but I still have a lot of thinking to do in the next few days.”