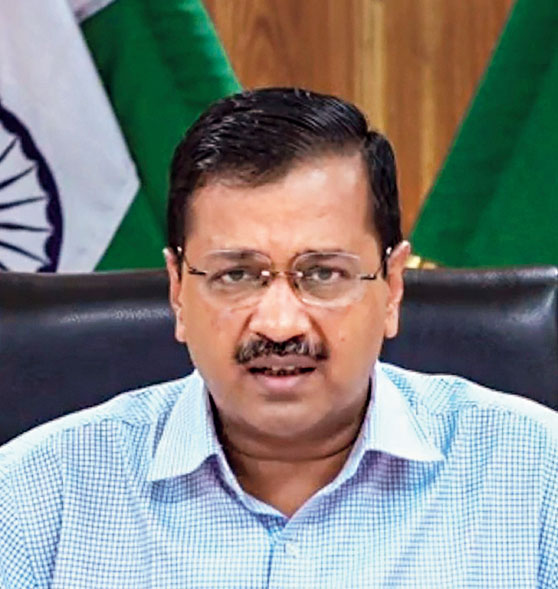 Chief minister Arvind Kejriwal on Tuesday sought public sanction for his demand for more relaxations to the lockdown in the capital, entirely a red zone now, appealing to people to come up with suggestions while underscoring the need for restarting economic activities.

“But I want your suggestions on the relaxation of the lockdown, about the tenure and gravity of the relaxation, on the sectors that should get the relaxation and whether buses, autos and metros should ply,” Kejriwal said.

“I also want your suggestions on whether markets and industrial areas should reopen. If the relaxations come into play, we have to maintain social distancing, wear masks and follow all the other norms. This is the time to stop the spread of Covid-19 but there is also a need for starting economic activities.”

Kejriwal has been demanding, without success, that the curfew-like restrictions be enforced only in 81 containment areas and the other parts of the capital allowed to function like infection-free green zones.

Delhi recorded 5,041 positive cases till Monday midnight, including 86 deaths, 13 of them on Monday.

Kejriwal’s appeal comes at a time the Delhi government’s revenue collection in April has been only Rs 323 crore — a fraction of the Rs 3,566 crore it had collected in April last year.

At the same time food subsidies have been enhanced and the number of beneficiaries expanded from 71 lakh to nearly a crore.

Kejriwal asked people to call in, WhatsApp or email their suggestions by 5pm on Wednesday. “Based on the suggestions received from the people and opinions of experts, the Delhi government will prepare a set of recommendations and send it to the Centre by May 15,” he said.

An AAP functionary said economic imperatives were behind Kejriwal’s appeal. “The push for this is economic. Politicians seek public opinion when they know the public is in favour of their policies. In this case it will put pressure on the Centre to relent, as the AAP is not keen on directly criticising (Prime Minister Narendra) Modi during this crisis,” the source said.

“We are at a stage where people need to go out and earn. Despite the government’s best efforts, food relief isn’t reaching many due to bureaucratic carelessness. The chief minister is clear that we can’t continue this level of economic paralysis beyond May. Else, we won’t be able to pay for subsidies and remain out of debt. It will lead to malnutrition-related diseases and deaths.”

After it returned to power in 2015, the AAP had institutionalised mohalla sabhas, or community forums, empowered to allocate resources for local civic works and identify beneficiaries for government schemes.

The scheme — which gave the government the discretion to nominate the coordinators of these sabhas — fizzled out within a couple of years.

Kejriwal on Tuesday tweeted about e-mohalla sabhas being conducted by MLA Somnath Bharti during the lockdown.

A government source cautioned that too many relaxations might jeopardise the situation further. “Hospitals are functioning at full capacity and patients under 102 degree Fahrenheit temperature are being asked to be treated at home. Any move to run trains or buses would lead to a surge in infections that no public health system can handle,” the source said.

“But there seems to be a missionary zeal in getting people back to work. Officials are coming to the secretariat and staff are being asked to build immunity and do their duty, which shows a lack of understanding of how contagious Covid-19 is.”