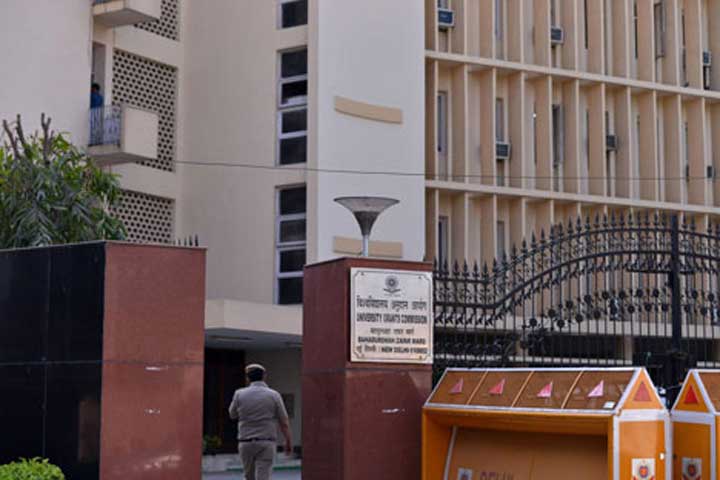 After coming to power in 2014, the NDA government had directed the University Grants Commission, the higher education regulator, to ask Delhi University to discontinue its four-year undergraduate programme on the ground that such courses did not have the necessary approvals
A Telegraph file picture
Basant Kumar Mohanty   |   New Delhi   |   Published 29.10.19, 09:28 PM

The human resource development ministry has revised its draft National Education Policy, introducing a host of policy measures that include differential salary packages for teachers of the same rank and integration of ancient Indian knowledge in fields as diverse as astronomy, surgery and yoga.

Another proposal the draft has come up with is to do away with the MPhil programme.

The updated draft will now be sent to the cabinet and then placed before Parliament for discussion and approval.

The draft policy has a provision for institutes to hire faculty for a fixed term and decide whether to retain a teacher after he or she completes their tenure.

According to existing norms, teachers are absorbed permanently after they complete a year’s probation.

One of the officials said the new policy would act as an “incentive” to perform. “Now there is no mechanism to recognise and incentivise faculty doing good research and teaching. The teachers get a uniform salary within the same rank. Differential salary packages will break the monotony.”

The new draft policy lauds the ancient Indian knowledge system and celebrates the contribution of people like Charaka, Susruta, Aryabhata, Bhaskaracharya, Madhava, Chanakya, Patanjali and Panini in fields as diverse as astronomy, medical science and surgery, civil engineering and architecture, shipbuilding and navigation, yoga, the fine arts and mathematics.

It proposes integrating the ancient system of knowledge with modern curricula and aims to phase out single-stream higher education institutions by converting them into multi-disciplinary establishments in keeping with traditional Indian literature that talks about 64 kala (crafts), including science, music and dance.

All these “arts” would be suitably integrated into the higher education curriculum, said an official.

“Institutions like the IITs and IIMs or universities have so far focused on distinct areas. The revised policy would seek to break the silos between disciplines and bring the liberal arts and humanities into different courses.”

According to the updated policy, all higher education institutions must offer courses in Open Distance Learning and in online mode to increase the higher education enrolment rate among 18-to-24-year-olds from about 26 per cent now to 50 per cent over the next 10 years.

The revised draft proposes four-year undergraduate programmes with the option to exit at the end of each year with graded academic qualifications.

After coming to power in 2014, the NDA government had directed the University Grants Commission, the higher education regulator, to ask Delhi University to discontinue its four-year undergraduate programme on the ground that such courses did not have the necessary approvals.

The new draft policy, however, allows universities and other institutions to offer four-year undergraduate courses. Those who opt out successfully at the end of the first year will get a diploma certificate, while those exiting after two years will receive an advanced diploma.

Public-funded higher education institutions will receive grants based on their accreditation score, not on demand. All institutions, including those offering Open Distance Learning courses, will have to be accredited.

Study of Indian languages will be a key area of focus, according to the draft policy that seeks to particularly strengthen the classical languages, including Sanskrit, by opening departments in each institution.

Academies will also be opened to promote the 22 official languages listed in the Constitution. While academies for Sanskrit, Hindi, Urdu and Sindhi will be started by the central government, the policy wants state governments to take similar measures for their respective languages.

The policy pitches for entrance-based admission to all institutions and universities, which now follow different criteria including marks secured in board exams.

Vocational or skill education will be another area of focus. All institutions, starting from schools to centres of higher learning, have to offer vocational courses. The goal is to achieve skill development among at least 50 per cent of learners by 2025.

A Rashtriya Shiksha Aayog (RSA) or National Education Commission, headed by the minister in charge of education, will decide on the broad issues of education, according to the new policy.

The proposed body will replace the existing Central Advisory Board of Education. The HRD ministry will be renamed as the ministry of education.

The policy proposes a single regulator to implement the broad framework the RSA would set, replacing existing regulators like the UGC, the All India Council for Technical Education and the National Council for Teacher Education. All these regulators will be merged.

According to the updated draft, the central government will issue common guidelines covering governance, finance and public disclosure norms for setting up private institutions, which would have the freedom to decide their fee structure.