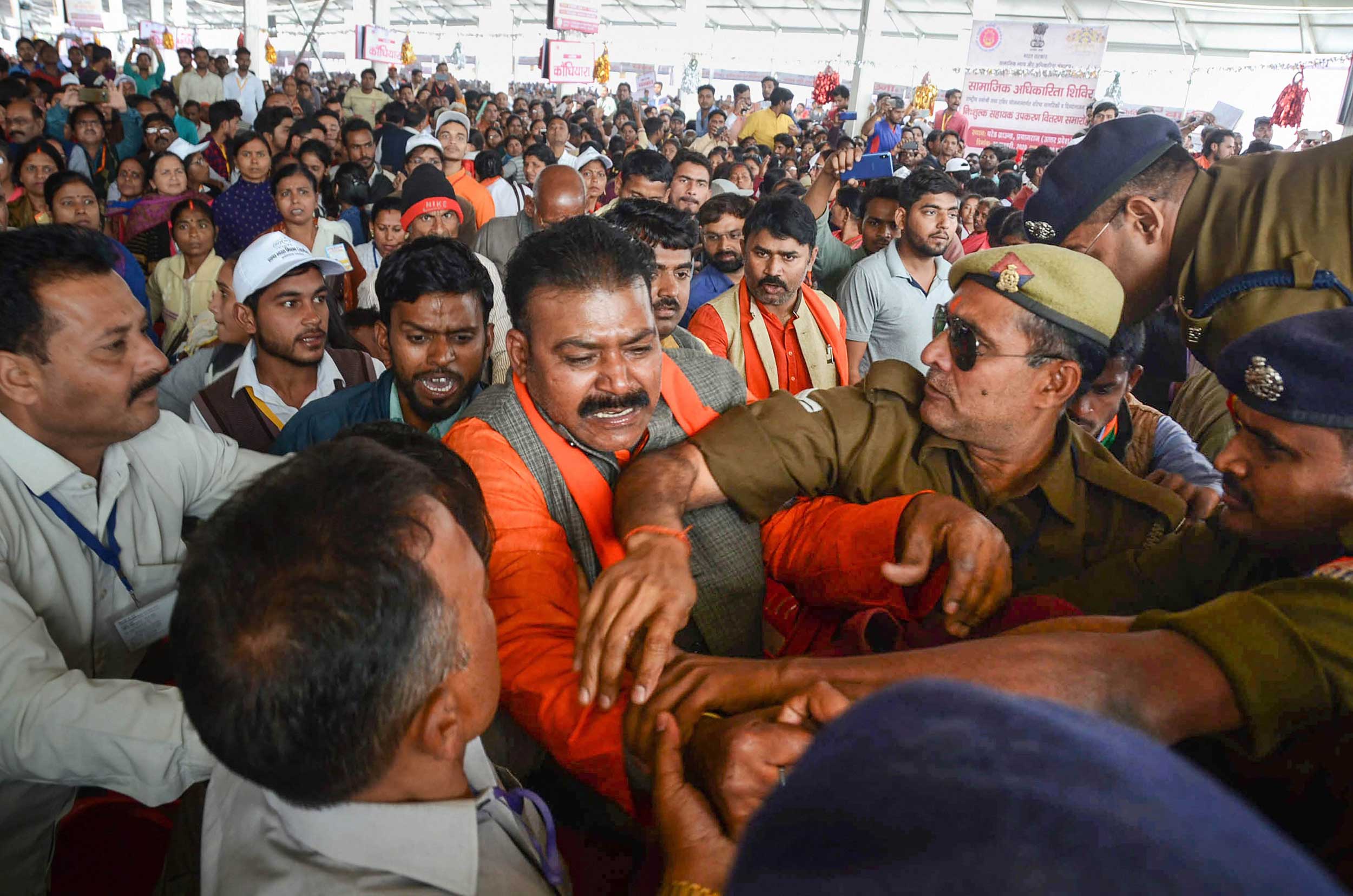 BJP workers tussle with protesters during a programme to distribute equipment such as tricycles, hearing aids and electronic walking sticks among the differently-abled and the aged, at the Parade Ground in Allahabad, on Saturday.
(PTI)
Piyush Srivastava   |   Lucknow   |   Published 29.02.20, 10:04 PM

Allahabad police on Saturday allegedly beat four youths and handed them over to a mob to thrash them again after the young men showed black flags to visiting Prime Minister Narendra Modi at a public event.

Jay Shankar Rawat, Deepak Kumar, Mohit Yadav and Saurabh Yadav, who purportedly chanted slogans in support of the anti-citizenship-act protesters, were later arrested on the charge of obstructing public servants from doing their duty and sent to jail custody.

An eyewitness said he had heard the youths tell local reporters, while being led away by the police, that they were students of Allahabad University and had no links with any political organisation. But Samajwadi Party leaders claimed they were from the party youth wing.

Allahabad senior superintendent of police Satyarth Aniruddh Pankaj denied the police had beaten the youths or handed them over to a mob.

“The police grabbed them and whisked them away. Later, they were booked for obstructing the police and sent to jail,” he told reporters.

Modi was distributing equipment such as tricycles, hearing aids and electronic walking sticks among the differently abled and the aged at Allahabad’s Parade Ground. The four youths had sneaked into the part of the gallery reserved for the disabled, the eyewitness said.

Soon after Modi began his speech, the young men stood up, pulled out black flags from their pockets and held them up. They also chanted “Modi, go back” and “Modi, listen to the women protesting against the citizenship law”, the eyewitness said.

“The police dragged them away from the cordoned area where Modi was addressing the meeting and beat them with batons and rifle-butts. There was commotion for a few minutes,” he said.

“I heard some Modi supporters ask the police to hand the youths over to them to be punished. The police did. The mob rained punches and kicks on them for about 15 minutes while the police watched from a distance. Then the police took them away in a jeep.”

Samajwadi Allahabad chief Iftekhar Hussain claimed the arrested youths were from the party youth wing. “The party will provide legal assistance to them and felicitate them after their release because they have raised a very important issue,” Hussain said.

Party spokesperson Mohammad Askari said: “We have seen video footage of a senior police officer pulling one of the youths by his hair (while dragging him away from the gallery) and BJP supporters hitting the young men in the face just a few feet from the dais of the Prime Minister.”