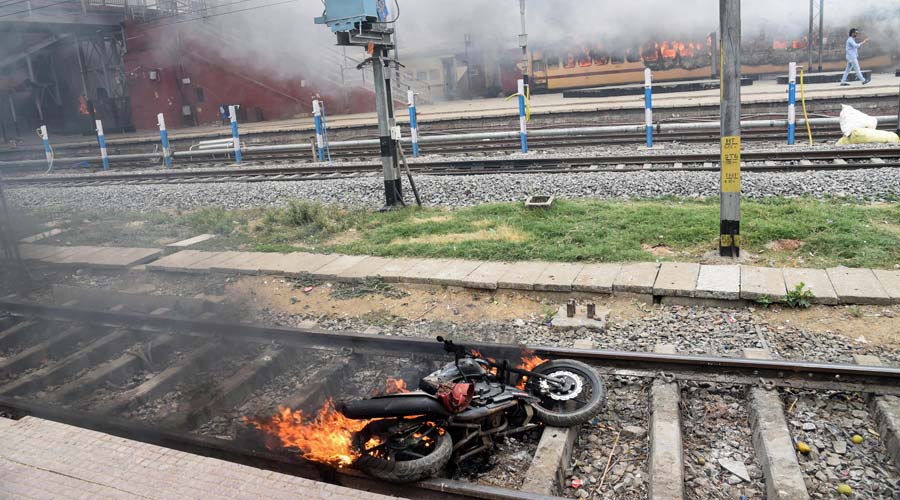 A motorcycle in flames at a railway track after a mob vadalised Farakka Express train and railway properties in protest against the Agnipath scheme, at Danapur Station near Patna on Friday.
PTI Photo
Our Bureau, PTI   |   Published 17.06.22, 01:45 PM

Over 200 trains have been affected so far due to the protests against the Agnipath scheme for recruitment in the armed forces, the Railways said Friday.

Around 35 trains have been cancelled while 13 short-terminated since the protests erupted on Wednesday, the national carrier said.

Railway Minister Ashwini Vaishnaw urged youths not to destroy railway asset. "I appeal to the youth to not indulge in violent protests and not damage the property of the Railways."

The worst-hit East Central Railways -- which covers Bihar, Jharkhand and parts of Uttar Pradesh, the states which have witnessed widespread protests -- has also decided to "monitor" the operations of eight trains due to the agitations.

The officials said they are keeping an eye on the movement of these trains and will take decision on their operation as the situation evolves.

Details about other cancelled trains were not immediately available.

Several trains run by the North Frontier Railways also pass through the ECR jurisdiction and three of them are also hit, the railways said.

Angry mobs have targeted trains and railway property in their protests against the Centre's Agnipath scheme for recruitment in the armed forces on a short-term contractual basis.

Coaches of three running trains in the ECR and one empty rake in Kulharia (also in the ECR) were damaged by violent protestors. One coach of a stationary train was also damaged in the washing line at Uttar Pradesh' Balia.

Damages to fixed asset are difficult to be assessed at the moment, railway officials said.

Reports of agitators vandalising the Secunderabad Railway Station and setting a trainset ablaze have also come in.