Advertisement
Home / India / If India is going Whiskey-Tango-Foxtrot in Afghanistan, here’s why
'Too many guns, too little space'

If India is going Whiskey-Tango-Foxtrot in Afghanistan, here’s why 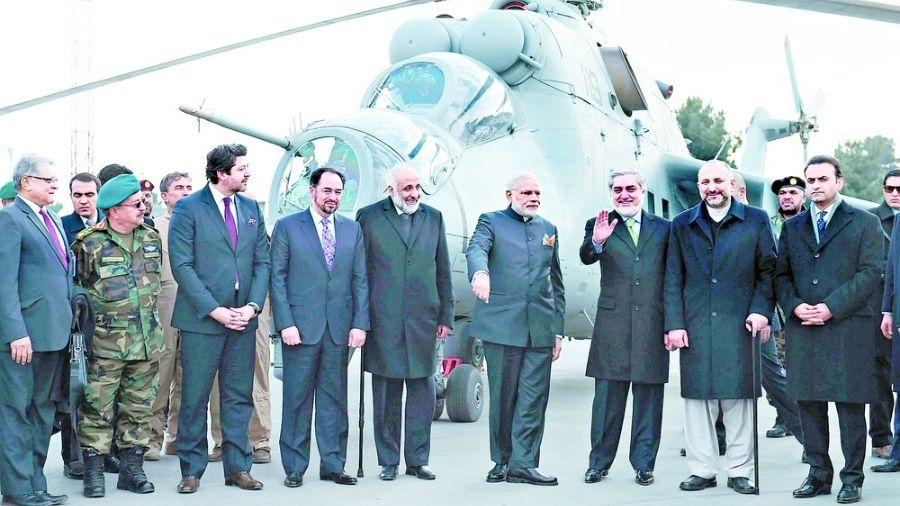 Prime Minister Narendra Modi in Kabul. In the background is one of the Soviet-era Mi25 attack helicopters that India gifted to Afghanistan.
The Telegraph
Sujan Dutta   |   Published 14.07.21, 02:48 PM

Dusk fell easy in the Kabul garden of a modest hotel in the late summer. The day was hard. An Indian Prime Minister was visiting the Afghan capital for the first time in nearly 30 years.

Within the space of a few hours he had laid the foundation stone of a new Afghan Parliament, opened a chancery for the Indian embassy and inaugurated a renovated Habibia High School among whose alumni are Hamid Karzai and Ashraf Ghani, the former and current presidents of Afghanistan.

The Habibia school in a large building with multiple wings in Karteh Seh was damaged in fighting among the many Mujahideen in the 1990s. India funded its re-building with $ 3 million. The reopening of the school was announced by Manmohan Singh and Hamid Karzai in the magnificent central hall that resembled a banquet room in a five-star hotel on August 29, 2005.

At the inaugural, as Karzai and Manmohan Singh sat on the dais, security guards from an American military contractor (DynaCorp) took position, many of them armed with M15 rifles. At the doors to the hall, Gorkhas from a British entity were on guard, also armed with submachine guns and carbines. In the lobby around the hall, soldiers from the Afghan National Army with newly-issued American firearms stood guard. There were soldiers with firearms in the balconies that overlooked the quadrangle.

Smartly suited men from the Indian Prime Minister’s Special Protection Group (SPG) detail escorted Manmohan Singh and took position around the dais. Just before they were escorted in, Bharat Vir Wanchoo, the French-bearded head of the SPG nervously surveyed the dais and the hall packed with officials, diplomats, students and of course soldiers.

In the garden of the Kabul hotel later in the evening where dusk fell easy, Wanchoo joined us for a quiet chat. Most of the journalists who were members of the Prime Minister’s media entourage were taken with Rahul Gandhi who was also visiting Kabul concurrently. But Siddharth Varadarajan (now editor of The Wire) was in the lawns. I was not part of the media entourage, having being pre-positioned in Kabul by the editor of The Telegraph (Aveek Sarkar) who wanted stories from Afghanistan that went beyond an Indian VIP’s day tour. I was in the lawns for the chat.

Wanchoo was more relaxed now, as we gathered around him.

Kabul was still far from secure for VIP visits of the order he was protecting. Four days back, when I had landed, mortars fired from the hills flanking the city exploded in the outskirts.

Security coordination for the Prime Minister’s visit had involved multiple national and international agencies. In the course of the day we had been to Darulaman in the southwestern suburbs and driven through Kabul for the chancery opening.

But it was really, really dangerous inside Habibia. Why?

“Too many guns,” explained Wanchoo. “Too little space.”

Even if a bullet fired from a potential assassin missed the target, the ricochet could be fatal. So many soldiers with so many guns facing one another would cause fatalities in a cross-fire.

That nightmare scenario is the picture of all Afghanistan today as the Americans cut and run. Too many guns with too many men leading a hardscrabble life in a landlocked country for too long.

If India has now gone Whiskey-Tango-Foxtrot – the phonetic alphabet is also the name of a Hollywood movie based in Afghanistan – by evacuating its mission staff from Kandahar, there is reason.

In the 15 years since that Manmohan Singh visit, India’s Afghanistan policy has swung from non-lethal support to lethal support for the regime in Kabul. The most visible of this of course is the gifting of Hind (Mi-25) Helicopter gunships from the Indian Air Force’s Firebirds squadron. The Soviet-built helicopters were refurbished before the gifting. Their role cannot be disguised. They are attack gunships seen in Rambo movies that fire cannon at hidden guerrillas in secluded valleys.

In December 2015, when he made that famous stop over in Lahore to visit Nawaz Sharif, Prime Minister Narendra Modi was photographed in Kabul with one of the India-gifted attack helicopters in the background.

In the civil war that has now begun in Afghanistan, Ghani’s Afghan National Defence and Security Forces (ANDSF) have only one advantage over the Taliban – air superiority. And even that is in danger of being whittled down because aircraft are difficult to maintain.

India’s aid to Afghanistan has totaled more than $ 3 billion. The military outfit, the Border Roads Organisation (BRO), built the Zaranj-Delaram Highway that connects to the Garland Expressway. A strategic project that was to connect to Iran’s Chabahar port through which India has supplied goods. That road was among the first Indian projects to be overrun.

Last week, the Taliban overran the Salma Dam, that was grandly named the Afghanistan-India friendship Dam, to the country’s west as rough men reached and drove out Afghan National Army troops and blocked half that 900-km-long border with Iran. The Afghan troops fled into Iran and were later airlifted to Kabul.

The Parliament House near Kabul that was announced by Manmohan Singh and inaugurated by Narendra Modi was built by the India’s Central Public Works Department (CPWD). The irony of both, the venue of the Kabul Parliament – it is overlooked by the cannibalized Darulaman Palace where Soviet Spetznaz troops parachuted in 1979 and invaded Afghanistan, and the fact that India’s own Parliament House was built by the British – is stark.

The Darulaman palace in the shadow of which India built Afghanistan's Parliament house.
Getty Images

India’s military assistance to Afghanistan till the delivery of those gunships was restricted to supply of vehicles made by the Mahindras and training about 50 officer cadets each year in defence academies.

Pakistan, that has always considered Afghanistan its backyard, strongly objected and is suspected to have orchestrated attacks on Indians – multiple attacks on the Indian embassy in Kabul among them.

On one of my half-a-dozen reporting assignments in Afghanistan for The Telegraph I saw the khaldar – denotified old Pakistani currency – being used in Jalalabad and Torkham at the Afghan end of the Khyber Pass. Tajik soldiers guarded the little bridge over the Kabul River on which buses pasted with posters of Aishwarya Rai and Rani Mukherjee trundled into Landikotal on the Pakistan side. Pakistan’s Frontier Works Organisation (FWO) was rebuilding the road to Jalalabad, a highway lined on both sides by burnt-out Soviet T-54 tanks and mangled BMP armoured troop-carriers. On the Safed Koh, the White Mountain on the Afghan side, a stone castle from the time of the Mughals was in ruin, the bluffs of mountains opposite fell sharply into a sandy brown fog raised by over-decorated trucks grudging in from Pakistan.

At a Pakistan Rangers’ base on the Khyber across the Kabul River that was now marked by a Pepsi hoarding that also read “Welcome to Pakistan”, former US National Security Advisor Zbigniew Brzezinski had famously stood with a Koran in one hand and a Stinger missile in the other while briefing the Mujahideen on attacking the Soviet occupiers of Afghanistan in 1980.

Both, the Koran and the Stinger have boomeranged with unerring accuracy as the US troops vacated their largest military base in Bagram in the dark last week ‘as if they would be ashamed in the morning of what was done in the night.’ In reality, the American troops actually distrusted the Afghan security forces so much that they did not disclose their time of departure.

They left behind more than three lakh pieces of military equipment, Afghan journalists have reported. This adds to the unquantifiable arsenals that have built up through more than 40 years of wars and battles. Unlike the Soviets who withdrew across the Amu Darya after a scorched earth policy – destroying materiel that could be used by the enemy – there is little evidence that the US troops have done so. Instead, they have left behind the Humvees – the armoured all-terrain vehicles – for the Afghan security forces that are now already with the Taliban, some of them mounted with recoilless guns.

The Soviet withdrawal in 1989 re-shaped the world, presaging the end of the Cold War, and reshaping India’s non-aligned status because the world itself was no longer to be divided in two superpower blocs. The American pullout that is happening as we speak is leaving India’s foreign policy in shreds in its aftermath.

There is only one certainty of a repeat for India: the blowback, the shrapnel from the blast of an exploding geopolitical bomb in the immediate neighbourhood. An Indian minister who was the army chief (General V K Singh) has already done a Ph.D thesis in which he has talked of a Chinese tunnel in the Wakhan Corridor, the panhandle in Afghanistan’s North East between Tajikistan and Kashmir.

Shortly after the collapse of the Soviet Union that followed it’s withdrawal from Afghanistan, celebrated spy novelist (and former spy himself) John le Carre was asked if the bottom had fallen out of his plots with the end of the Cold War. Many of his dry and angsty thrillers were till then set in the real backdrop of the NATO-versus-Warsaw Pact scenarios, in a bisected Berlin, in Budapest, in London.

“I don’t think so,” he responded. Not with “all those Kalashnikovs sloshing around in eastern Europe”.

As with the Kalashes, so with the Humvees. They are sloshing around across the Khyber and India is in the line of the fire.