The front-page ad in the Sunday edition of The Indian Express newspaper claimed that Yogi is transforming UP, and showed the flyover among other visuals 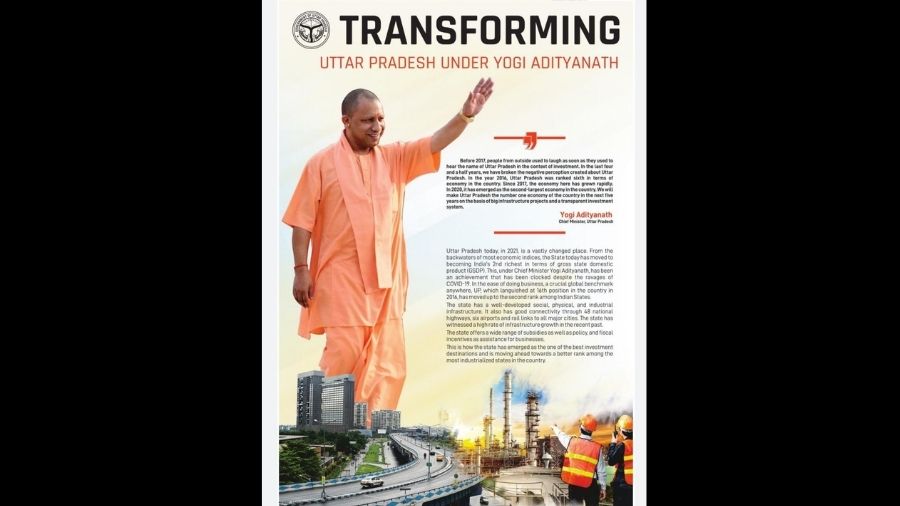 A front-page advertisement that Yogi Adityanath’s government in Uttar Pradesh took out in the Sunday edition of The Indian Express newspaper, claiming he was transforming the heartland state, showed the Maa Flyover of Calcutta among other visuals.

“A wrong image was inadvertently included in the cover collage of the advertorial on Uttar Pradesh produced by the marketing department of the newspaper. The error is deeply regretted and the image has been removed in all digital editions of the paper,” The Indian Express tweeted on Sunday.

A wrong image was inadvertently included in the cover collage of the advertorial on Uttar Pradesh produced by the marketing department of the newspaper. The error is deeply regretted and the image has been removed in all digital editions of the paper.

Mistakes are not unusual and the matter would normally have ended with the clarification and expression of regret.

But the BJP’s publicity machinery protested too much, circulating the newspaper’s clarification and saying: “Well done. The chaps in TMC (Trinamul Congress) and assorted opposition jumped up and down in excitement as a result. Who will now compensate for killing their excitement? Double whammy this.”

The political irony of the visual could not have been starker: Here’s the poster boy of muscular Hindutva basking in the reflected glory of a flyover Mamata Banerjee had inaugurated and named. Can Maa, Mamata and Bengal aspire to a bigger compliment than this? The flyover project was started in 2010 by the then Buddhadeb Bhattacharjee government and was inaugurated on Mamata’s watch.

The towering image of himself over Maa would have been particularly galling for Adityanath, who had aggressively campaigned against Mamata in the Assembly elections. In every election henceforth in Bengal, it is unlikely that Trinamul will allow Adityanath to forget the monumental blunder.

Uttar Pradesh government spokesperson Siddharth Nath Singh told The Telegraph: “It was an advertorial of The Indian Express; we have taken the matter up with them.”

Asked whether the government didn’t vet its advertisements before publication, Singh said: “We obviously pay for such advertorials and there may be some problem but the mistake was committed by the newspaper.”

Two grey areas have cropped up here. One, whether it was an advertorial or an advertisement.

An advertisement is a straightforward pitch that hard-sells a product, person or an organisation. Its character is all too apparent to laypersons.

Besides, the abbreviation “ADVT” or the word “Advertisement” is printed on top of advertorials to tell the readers that the content below is not that of the publication.

The Indian Express website says that “the responsibility of providing the ad material remains with the agency/client who place the booking for an advertisement”.

The content of an advertorial is also largely provided by a client but the publication can demand changes in the typeface and the layout to ensure it stands apart from the editorial matter.

Any specific mention of “ADVT” or “Advertisement” is not visible at the top of the front page attributed to The Sunday Express and circulating on social media through the day.

A veteran media professional, who did not want to be named, said the front page featuring Adityanath and Maa looks more like an advertisement than an advertorial.

The veteran media professional said: “Had it been an advertorial, it would have had some similarity with a regular news page or front page while showing distinctive typefaces and a label denoting it as an advertorial at the top. These are industry standards but I am not familiar with the in-house style of this particular publication.”

The second point of contention is whether a client can lay the entire blame at the door of the publication. The content is the responsibility of the client. The publication can only verify whether it goes against the law of the land (such as a wrong map or content disturbing peace).

Trinamul national spokesperson and Rajya Sabha member Derek O’Brien, who had been a journalist as well as an advertising professional, said in Calcutta: “It’s a basic advertorial norm that no (state government) ad is released without the consent of the state government.... There has to be one person signing the ad’s content and putting the sign on it before it is released. They cannot get away with this.”

Officials of the Uttar Pradesh department of information and publicity, which had issued the advertisement, went incommunicado.

Usually, it is Sishir who selects pictures and gives the initial as well as final approval for an advertisement, a source in the department said.

“It took three weeks to prepare this advertisement. Initially, it was approved and then supervised by many deputy directors. The text was prepared by a PR agency,” the source said, adding that he was not aware of any departure from the usual process this time.

Shishir’s mobile was off when this newspaper called him to ask whether he had selected the picture and approved the final advertisement.

Right at the top, the advertisement quotes Adityanath, who came to power in 2017, as saying: “Before 2017, people from outside used to laugh as soon as they used to hear the name of Uttar Pradesh....”

Such laughter rang loud in Calcutta on Sunday as O’Brien and Trinamul MLA Samir Chakraborty addressed a news conference on the controversy.

“Ajay Bisht, who changed his name to Yogi Adityanath, came to Bengal to campaign against Trinamul 11 times. He last came here in April. Finally, he has acknowledged that development is happening in Bengal. The picture of Maa Flyover as a part of UP’s development project is proof of that,” O’Brien said.

“I’ll give him a list of a few other developmental initiatives of the Bengal government so that he can come up with a series of such ads.”

Chakraborty claimed the BJP had forced the newspaper to take the blame on itself.

Trinamul national general secretary and Diamond Harbour MP Abhishek Banerjee tweeted: “Transforming UP for @myogiadityanath (Adityanath) means stealing images from infrastructure seen in Bengal under @MamataOfficial’s (Mamata Banerjee’s) leadership and using them as his own!”

Transforming UP for @myogiadityanath means stealing images from infrastructure seen in Bengal under @MamataOfficial's leadership and using them as his own!

Looks like the 'DOUBLE ENGINE MODEL' has MISERABLY FAILED in BJP’s strongest state and now stands EXPOSED for all! https://t.co/h9OlnhmGPw

Thuggy Yogi in his UP ads with Kolkata’s MAA flyover, our JW Marriott & our iconic yellow taxis!

Change your soul or at least your ad agency Gudduji!

P.S. Looking forward to FIRs against me in Noida now :-) pic.twitter.com/I7TRUMvCjO

He added: “Looks like the ‘double engine model’ has miserably failed in BJP’s strongest state and now stands exposed for all!”

Adityanath did not react to the flyover controversy on Sunday. At a public meeting in Kushinagar, he used the term “Abba Jaan” — a pejorative reference to a community and the Samajwadi Party.

Adityanath said “Abba Jaan used to digest rations” before 2017. “Rations meant for Kushinagar used to go to Nepal and Bangladesh,” he said, threatening to jail “anybody who digests the rations of the poor”.