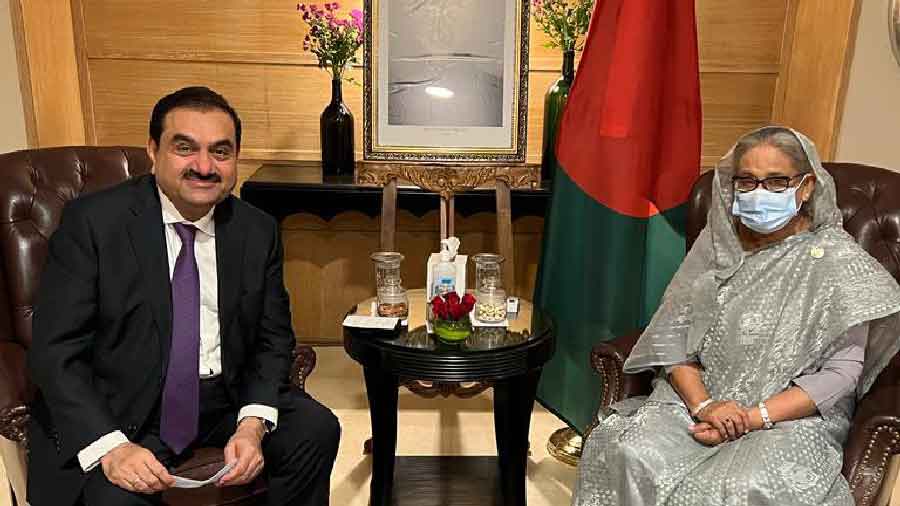 That attracting Indian investment — especially in infrastructure — is a priority with Bangladesh became clear on Day One of the visit when Hasina met Indian business leader Gautam Adani, chairman of the Adani Group, on Monday evening.

Although details of the meeting were unavailable, Adani tweeted a picture with the Bangladesh Prime Minister on Monday evening.“It is an honour to have met Hon PM of Bangladesh Sheikh Hasina in Delhi. Her vision for Bangladesh is inspirational and stunningly bold. We are committed to commissioning our 1600 MW Godda Power Project and dedicated transmission line to Bangladesh by Bijoy Dibosh, 16 Dec 2022,” Adani tweeted.

Bijoy Dibosh commemorates the defeat of the Pakistani armed forces in the Bangladesh Liberation War of 1971. Adani Power is developing the 1.6GW Godda ultra supercritical thermal power project in Jharkand with an investment of Rs 1,500 crore. The company signed a memorandum of understanding with the Bangladesh Power Development Board in September 2018 to develop the project on a build-own-operate basis and supply the generated power through a dedicated transmission line.

Bangladesh, faced with a foreign exchange crisis after Russia’s invasion of Ukraine raised oil prices, recently shut down all its 10 diesel-run power plants to save on foreign currency. The decision has led to largescale power cuts across the country.

“It can be presumed that the Prime Minister wanted some updates on the company’s plans about power transmission to Bangladesh,” a source on the Bangladeshi side said.

He suggested that the Ad¬ani Group might also explore opportunities in the Bangladesh port sector, which has seen significant Chinese investments in recent times. Dhaka is focusing on modernising its port infrastructure to try and come out of the Covidinduced slowdown of its exports.The $416billion Banglad¬esh economy has for several years been one of the fastest growing in the world, but the dwindling foreign exchange reserves, ravaged by inflated import bills, have suddenly compounded the Hasina government’s problems.

Dhaka recently approached the International Monetary Fund and the World Bank for loans to tide itself over the crisis. A source in the Bang¬ladeshi side told this corre¬spondent that the government was confident about overcom¬ing the sudden headwind and that efforts were on to create infrastructure — such as an increased power generation capacity and better rail and road linkages — that would help accelerate growth.On Tuesday, Hasina and Prime Minister Narendra Modi virtually unveiled the 1,320MW Maitree super thermal power project at Rampal in Khulna and four other projects, including a railway bridge over the Rupsha river and the Khulna Darshana and Parbatipur Kaunia rail link projects. The two Premiers also inaugurated supplies of road construction equipment and machinery in 25 packages to the Bangladesh road and highways department.

“If you look closely, the focus of the trip is on augmentation of infrastructure, which is a must for a growing economy. We think the visit will accelerate the growth of our economy,” another source in the Bangladesh delegation said.

Besides, foreign investment, such as from India, can help shore up Dhaka’s forex reserves and arrest the slide of the Bangladeshi taka.“Tomorrow, I shall have an engagement with the business forums of Bangladesh and India,” Hasina said.