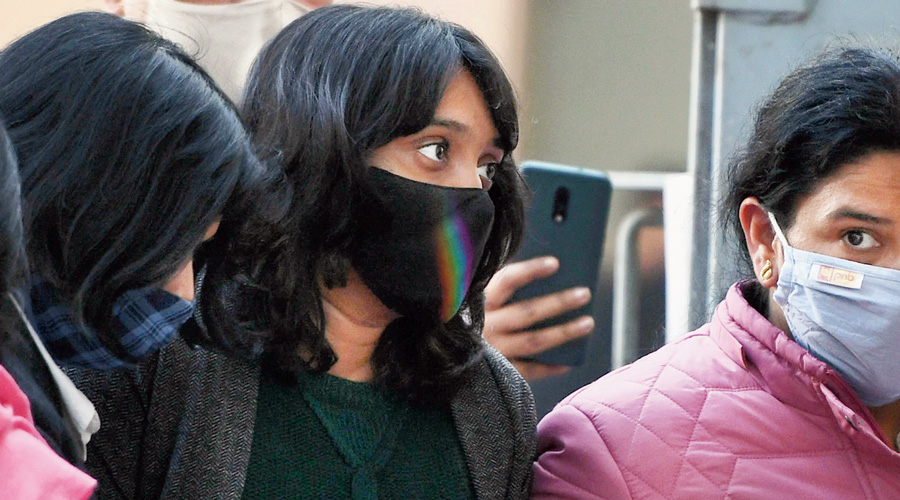 Environment and rights activists from across the country on Friday demanded the immediate release of climate activist Disha Ravi and the dropping of all charges against her and co-accused.

Addressing the media via the Zoom digital platform, the activists said the 22-year-old Bangalorean’s arrest was a warning to the youth to “shut up and stay at home” and to parents to rein their children in.

They urged the Centre to hold an open dialogue with the youth and all those supporting the farmers’ agitation, and sought repeal of the sedition law and the anti-terror UAPA.

A Delhi police team had taken Disha from her Bangalore home to Delhi on February 13 and booked her on sedition and other charges for allegedly editing and sharing a social media toolkit on how to express support for the protesting farmers.

The National Alliance of People’s Movements, Coalition for Environmental Justice in India and the People’s Union of Civil Liberties also demanded the cancellation of the arrest warrants against Disha’s co-accused — Mumbai lawyer Nikita Jacob and Beed-based engineer Shantanu Muluk.

Kavita Srivastava of the PUCL said Disha’s constitutional rights had been violated.

“She was editing and sharing a document. She was on a Zoom call. Isn’t that enabling young people to know more about the farmers’ struggle?” she asked.

Srivastava described the sedition law and the UAPA as “tools for the Modi government (to harass critics) whenever it is in trouble”.

“Every time they face a challenge, the rest of us become anti-national,” she said.

Carnatic singer T.M. Krishna said: “For long we have been told that fringe groups are the ones that target those who express (their views). Then it became very clear that the state itself is the aggressor and targets anyone who asks questions.”

Krishna termed Disha’s arrest a “warning to parents” to keep their children at home. “There are two kinds of attacks. One is frontal, basically saying, ‘Shut up and stay at home’. The other is poisoning young minds.”

Nagraj Adve of Teachers Against Climate Crisis said that youths were scared after Disha’s arrest. “I spoke to some young people yesterday. All of them talked about their fear and anxiety,” he said.

“Those in the 10th and 11th standard are particularly terrified. I’m really worried about what these arrests will do for climate change in this country.”

He added: “For years there was no real movement. But over the last two or three years we have seen hundreds of young people making clear demands in the context of the climate crisis in many towns.”

In response to a question, Abhilasha Singh, former student of Mount Carmel College from where Disha graduated in business administration, said youths had their way of surmounting such challenges.

“If you believe in something and have certain convictions you will push against whatever stands in your way,” Singh said.

“That is the only thing we can do now. With the solidarity that we have built along the way, I see this as a fight that we can pull off.”