A vigorous voice for dissent 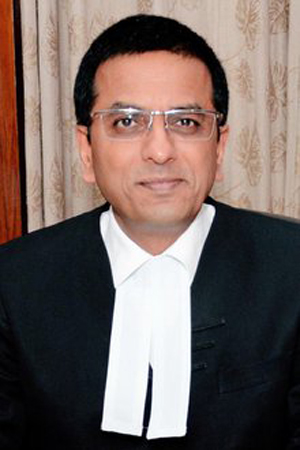 Senior Supreme Court judge Justice D.Y. Chandrachud on Saturday said the true test of a democracy was its ability to ensure space for every individual to voice his or her opinion without fear of retribution and the way the State treats dissent.

The judge said the blanket labelling of dissent as “anti-national or anti-democratic” strikes at the heart of the commitment to protect constitutional values.

Making a case for preserving the “rich pluralist history”, Justice Chandrachud asserted that “homogeneity is not the defining feature of Indianness”.

He added at one point: “Pluralism is not the toleration of diversity; it is its celebration.”

“Inherent in the liberal promise of the Constitution is a commitment to plurality of opinions. However, the litmus test of any claim of commitment to deliberation is assessed by the response of two key actors — the state and other individuals,” the judge said.

“If you wish to deliberate you must be willing to hear all sides to the story. A legitimate government committed to deliberate dialogue does not seek to restrict political contestation but welcomes it.”

The judge, who is due to become the Chief Justice of India on November 11, 2022, and remain the CJI till November 10, 2024, however, made it clear that commitment to pluralism did not imply non-interference if it hindered constitutional principles.

The judge said “the commitment to civil liberty flows directly from the manner in which the State treats dissent”.

“A state committed to the rule of law ensures that the state apparatus is not employed to curb legitimate and peaceful protest but to create spaces conducive for deliberation.”

Within the bounds of law, he asserted, liberal democracies ensure that citizens enjoy the right to express their views in every conceivable manner, including the right to protest and express dissent against prevailing laws.

“The blanket labelling of such dissent as ‘antinational’ or ‘anti-democratic’ strikes at the heart of our commitment to the protection of constitutional values and the promotion of a deliberative democracy. Protecting dissent is but a reminder that while democratically elected governments offer us a legitimate tool for development and social coordination, they can never claim a monopoly over the values and identities that define our plural society,” Justice Chandrachud said.

“What is of utmost relevance today is our ability and commitment to preserve, conserve and build on the rich pluralist history we have inherited. Homogeneity is not the defining feature of Indianness,” he said.

His address comes at a time dissenters are being indiscriminately branded “anti-nationals” and sedition cases are being slapped for shouting slogans or delivering speeches at protests against the new citizenship matrix.

“The destruction of spaces for questions and dissent destroys the basis of all growth — political, economic, cultural and social. In this sense, dissent is the safety valve of democracy. The silencing of dissent and the generation of fear in the minds of people go beyond the violation of personal liberty and a commitment to constitutional values — it strikes at the heart of a dialogue-based democratic society which accords to every individual equal respect and consideration.”

According to the judge, the commitment to pluralism requires positive action in the form of social arrangements where the goal is “to incorporate difference, coexist with it (and) allow it a share of social space”.

So the State, the judge said, had a positive obligation to ensure the deployment of its machinery to protect freedom of expression within the bounds of law and dismantle any attempt by individuals or other actors to instil fear.

That includes not just protecting free speech, but also actively welcoming and encouraging it, he added.

Justice Chandrachud said an equal obligation to thwart attempts to curtail diverse opinions rests on every individual who may not agree with opposing views.

“India, as a nation committed to pluralism, is not one language, one religion, one culture or one assimilated race. The defence for pluralism traverses beyond a commitment to the text and vision of the Constitution’s immediate beneficiaries, the citizens. It underlines a commitment to protect the very idea of India as a refuge to people of various faiths, races, languages and beliefs. India finds itself in its defence of plural views and its multitude of cultures,” he said.

No monopoly on India

In providing safe space for a multitude of cultures and the free expression of diversity and dissent, the judge said, it has to be affirmed that the nation belongs to every individual and no single individual or institution can claim a monopoly over the idea of India.

They rejected separate electorates and dismissed the relevance of numerical disadvantage in a polity.

“The framers of the Constitution rejected the notion of a Hindu India and a Muslim India,” Justice Chandrachud said. The founding fathers wanted a “compact nation” that was “not divided into compartments”.

“As another member said — ‘There will be no divisions amongst Indians. United we stand; divided we fall’. The framers provided safeguards for the protection of individual identity as a part of a group and placed trust in future generations to create a common bond of what it meant to be Indian that shunned homogeneity and celebrated diversity in a manner that is not divisive. It is that trust of the framers that we strive to live up to today,” the judge said in his address.

He said pluralism should thrive not only because it inheres in the vision of the Constitution, but also because of its inherent value in nation building.

Justice Chandrachud, however, added that commitment to pluralism did not imply non-interference where group practices hinder the constitutional vision of an equal citizenship premised on equal dignity, worth and liberty of every individual, as the constitutional provisions on freedom of religion best exemplify.

“Individual right to the freedom of religion is not intended to prevail over but is subject to the overriding constitutional postulates of equality, liberty and personal freedoms recognised in the other provisions of Part III (fundamental rights).

“The scheme of Articles 25 and 26 (relating to freedom of religion) of the Constitution does not disturb but strengthens the ethos of Part III of the Constitution, which is premised upon individual autonomy and dignity as the central overarching values which infuse all fundamental rights with meaning,” Justice Chandrachud said.

The judge said an essential aspect of any successful democracy was its commitment to protect deliberative dialogue. Citizens manifest their equality not only by refraining from interfering with the freedom of expression of others, he said, they also do so by sustaining the conditions conducive for free communication.

Justice Chandrachud said the Constitution was a commitment to a deliberation that incorporates the diverse views of all stakeholders concerned, including those who do not support a proposed law.

“The fine balance between majoritarianism and liberal democratic governance is marked by constitutional principles wedded to the rule of law, the guarantee of individual freedoms and ensuring freedom from discrimination. A democracy welded to the ideal of reason and deliberation ensures that minority opinions are not strangulated and ensures that every outcome is not a result merely of numbers but of shared consensus,” he said.

“Democracy then is judged not just by the institutions that formally exist but by the extent to which different voices from diverse sections of the people can actually be heard, respected and accounted for. The great threat to pluralism is the suppression of difference and the silencing of popular and unpopular voices offering alternative or opposing views. Suppression of intellect is the suppression of the conscience of the nation.”

Justice Chandrachud said a united India was not one characterised by a single identity devoid of its rich plurality, both of cultures and of values. National unity denotes a shared culture of values and a commitment to the fundamental ideals of the Constitution in which all individuals are guaranteed not just the fundamental rights but also conditions for their free and safe exercise.

“The nation’s continued survival shows us that our desire for a shared pursuit of happiness outweighs the differences in the colour of our skin, the languages we speak or the name we give the Almighty,” the judge said.

“These are but the hues that make India and, taking a step back, we see how altogether they form a kaleidoscope of human compassion and love surpassing any singular, static vision of India. Pluralism is not the toleration of diversity; it is its celebration.”

R Balaji is a practising advocate in the Supreme Court