In time of protests, recall how a lunatic asylum was transformed

Nothing, perhaps, is more foolhardy than attempting to ring in the New Year by looking back, not ahead.

But we live in interesting times, and serendipity led to a time tunnel in a verdant patch in Thiruvananthapuram, the capital city of Kerala, on the penultimate day of 2019. Over in less than 15 minutes, the 300-metre journey covered over 150 years, capturing some of the most dramatic social reforms in the 19th and 20th centuries in India.

A modest but refreshing open-air exhibition of archival material was under way along a landmark walkway in the capital city, chronicling the transformation of Kerala from what Swami Vivekananda described in the second half of the 19th century as a “lunatic asylum” to what another accomplished son of Bengal, Amartya Sen, lauded as “the Kerala experience”.

Why reopen the much-documented and well-thumbed tome from history that has become a cliche? The content of the exhibition itself is not new either.

Perhaps, with several Indian campuses in ferment, countless women standing up to be counted and multiple faiths joining hands against the citizenship regimen, there is no better time than now to revisit the sepia-tinted pages. As it turned out, some remarkable parallels with uncanny similarities with contemporary India emerged.

Page after page was pasted on a screen stretched over the manicured hedge of the museum in Thiruvananthapuram. The museum has its collection of admired artefacts but the leafy premises probably draw more visitors who use the grounds as a jogger’s or walker’s park.

So, there you are, one moment fighting the flab and the next strolling down a historical memory lane, starting out from the first half of the 19th century and stretching up to the second half of the 20th century.

The six-day archival exhibition, organised by the cultural affairs department of the state government, is being held as part of Loka Kerala Sabha 2020 that seeks to bring under one umbrella Malayalis spread across the world and the rest of India.

The very first exhibit is the striking and reassuring image of Swamiji, arms crossed and head tilted, accompanied by the legend “BHRANTALAYAM (lunatic asylum)” and a description of the dark days of untouchability, superstition, oppression and inequality that compelled the monk to call Kerala a madhouse in 1892. Swami Vivekananda was then on his own discovery of India tour, a year before he cast a spell in Chicago with his immortal speech. 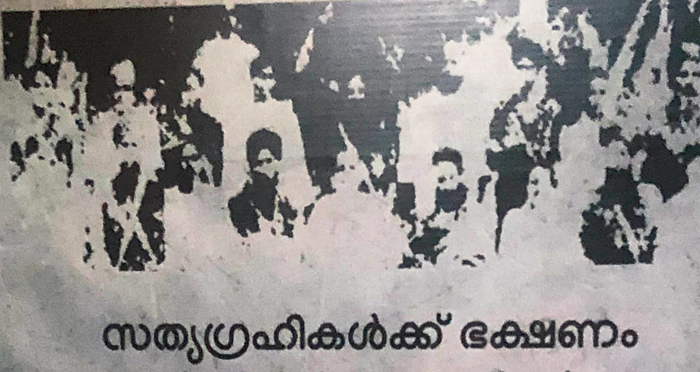 Another entry comes up soon, marking the Nobel laureate’s salute to the Kerala of the 1970s, by when the state had become a symbol of tolerant pluralism.

On the hedge-lined memory lane outside the museum, a train of milestone events in social reform — mostly hand-written orders retrieved and reproduced from the archival vaults — capture some of the moments that helped transform the Kerala Swamiji saw into the one that Sen applauded.

Archival materials on many other social reforms are part of the exhibition but a precursor to the temple entry proclamation holds significance for the events unfolding in the country now.

In 1924, 12 years before the temple entry proclamation, Kerala witnessed a protest movement called the Vaikom Satyagraha through which the avarnas (people from the lower castes) sought the right to use roads leading to a temple.

The savarnas (the upper castes) sought to suppress the movement with brutality, not too different from the response of Delhi and Uttar Pradesh police to the protests against the Citizenship (Amendment) Act and the National Register of Citizens.

But the movement struck a chord in several parts of the country, so much so that Mahatma Gandhi intervened. The movement was not considered a complete success but it does hold valuable lessons for the current waves of protests.

One, the 1924 movement became a testing ground of sorts for the Satyagraha movement — whose potency was indeed proved — that the Mahatma eventually fine-tuned.

Two, the Vaikom Satyagraha became a magnet for communal harmony. Muslims, Christians and Sikhs closed ranks behind the Hindus, who included both avarnas and savarnas, fighting for the right to the roads.

On Monday, an exhibit on the museum grounds stood out. It shows a black and white picture of Sikhs with the satyagrahis and tells the story of how, led by Lal Singh, 15 Sikhs from Punjab reached Vaikom, around 170km from Thiruvananthapuram, and set up a langar to feed the protesters. They remained there until Gandhi told them they could return.

On Monday again, Shaheen Bagh, where a group of women and children are braving in the open the coldest December in decades, went a step ahead of Vaikom. They became the gracious hosts. A tweet marked the moment: “At Shaheen Bagh, almost every conversation begins with ‘Aapne kuch khaya? Nahin? Kya khayenge? Kyun nahin, aap door se aaye toh hamara saath dene, kuch toh kha lijiye….’”

For transforming Kerala from a lunatic asylum to a modern beacon, much credit has been given to the benevolent monarchs of the time. But indisputable is the role played by many popular movements that sprang up much like the ongoing protests.

It is perhaps not a coincidence that on Tuesday, the Kerala Assembly became the first in the country to pass a resolution demanding the withdrawal of the Citizenship (Amendment) Act. In the highly politicised state, every single party, except the BJP, backed the resolution.

“We have always been proud of our unity in diversity that stems from secularism and equality. That we have been able to remain united as one nation and one people are because of these two features,” chief minister Pinarayi Vijayan said.

When Kerala transformed itself from a lunatic asylum, triumph came neither easily nor swiftly. Even the Mahatma had to wait for 12 years before the temple entry proclamation was made.