His naked grief shook me, forced me to stop to ask: Photographer 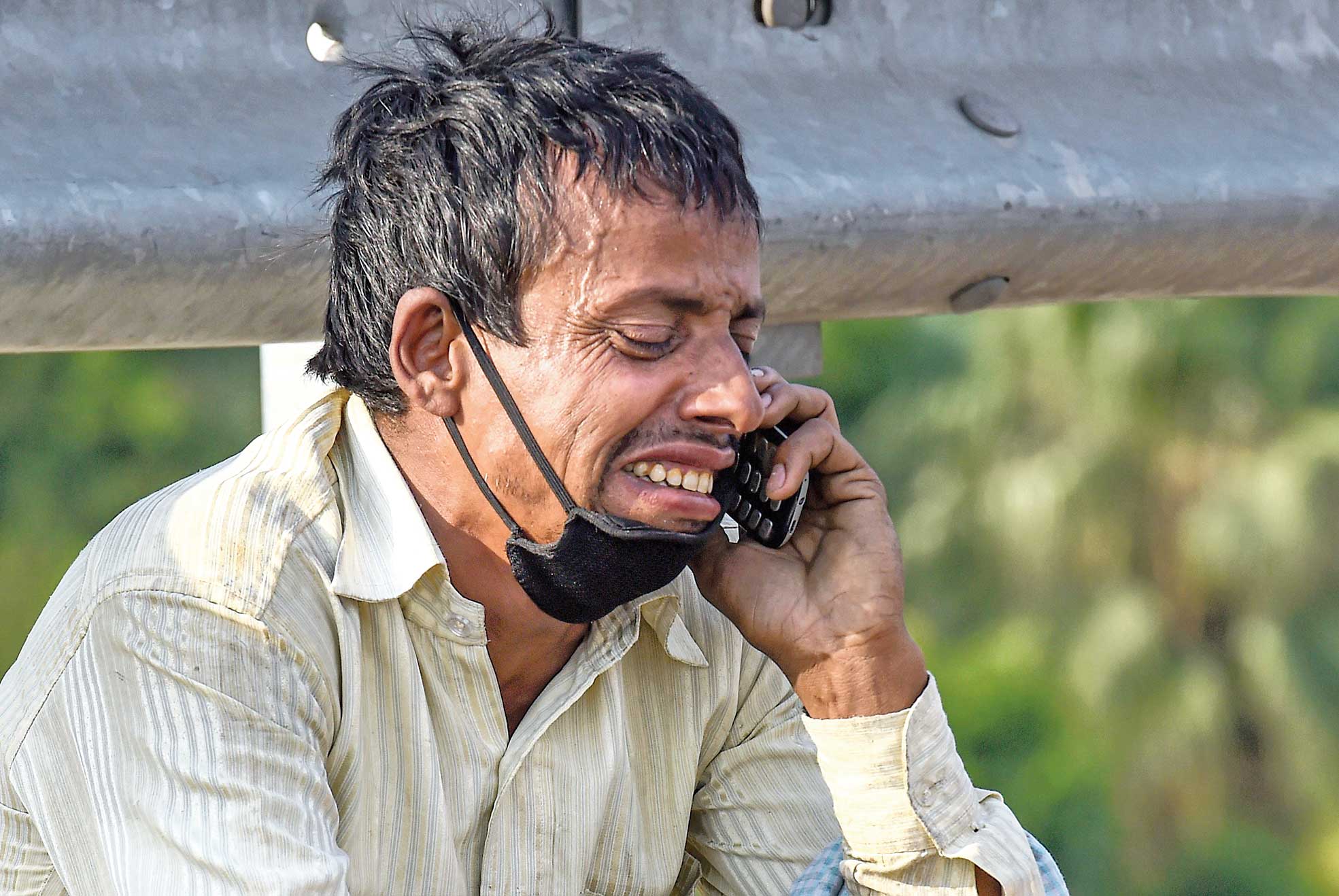 The PTI picture taken on May 11 shows the migrant labourer breaking down while talking to a relative over his mobile phone at Nizamuddin Bridge in New Delhi.
Kunal Dutt   |   New Delhi   |   Published 16.05.20, 08:17 PM

A PTI photograph of a migrant labourer on the phone in Delhi, face twisted in grief, was on the front page of newspapers and was circulated widely on social media.

Agency photographer Atul Yadav recounts his meeting with Rampukar Pandit, 38, on a roadside on May 11, which resulted in an image that captured the tragedy of migrants across India:

He was talking on the phone and sobbing uncontrollably on the Nizamuddin Bridge. And I just couldn’t drive on. In the previous few weeks I had come across and photographed so many migrants, one more helpless than the other, and honestly I didn’t expect to feel surprised at the sight of a grown man crying. But I was.

Inured as we are, his naked grief shook me. It felt personal enough for me to not simply click a picture and move on. I just had to know what was bothering him.

His son was unwell and might die, and he just wanted to go back home, the desperate father told me.

I asked him where, and the man just managed to say “udhar (there)” in between sobs, pointing at the expanse of road across the Yamuna and meandering towards Delhi’s borders a few miles away.

It was much later that I realised that home for him was Bariarpur in Begusarai, Bihar, almost 1,200km away.

He said he worked as a labourer in Najafgarh and, in the absence of any public transport, had started walking home like thousands of other migrants across the country. But the police at the bridge had refused to let him go further. The man, broken and defeated, had been stuck at the Nizamuddin Bridge for three days.

I offered him biscuits and water and tried to reassure him. But can any consolation be enough for a father scared he won’t see his son again?

I approached nearby police personnel, requesting them to let him cross the border. They were reluctant, but they said they would ensure he reached home.

I arrived home soon after and realised I had not asked him his name or his phone number. I wanted to know if he had managed to reach home, if he had seen his son, if the child was well.

I didn’t have to wait long. That was a Monday, 5.15pm. PTI put out the photograph I had taken and it was distributed widely across the media, the anguished father’s grief touching a chord in so many people.

Several newspapers followed up on his story. And then I learnt his name was Rampukar Pandit and that his son had lost the battle for his life. It broke my heart.

Pandit is now back in Begusarai, holed up in a quarantine centre on the town’s outskirts and yet to meet his ailing wife and three daughters.

In a phone call with PTI, he recalled the meeting with “a photographer” — he didn’t know Yadav’s name — and said he and a woman had been his “saviours”.

“I was sitting on the roadside, exhausted and thinking of ways to reach home. A journalist came and asked why I was so upset and tried to help me by taking me into his car, but the police did not allow him. A woman then came and made some arrangements…. She was like my ‘mai-baap’ (parents),” he said.

“She gave me food, Rs 5,500, and also booked a ticket for me on the special train. That’s how I was able to reach home.”

He said his son Ramparvesh had died shortly after his photograph was taken.

“My son, who had not even turned a year old, died and a bolt of lightning hit me. I pleaded with the police to let me go home but they wouldn’t help,” he said.

“One policeman said, ‘Will your son come back to life if you return home?...”

Pandit said he had reached Begusarai by train “a couple of days ago” and been quarantined since then.

“The rich get all the help, getting rescued and brought home in planes from abroad. But we poor migrant labourers have been left to fend for ourselves. That is the worth of our lives,” he said.

“We labourers have no country, no life; we are just cogs in the wheel, spinning until we run out of life.” PTI