The demand was part of the Assembly election manifesto of the UPA, which wrested power in Jharkhand from the NDA last year 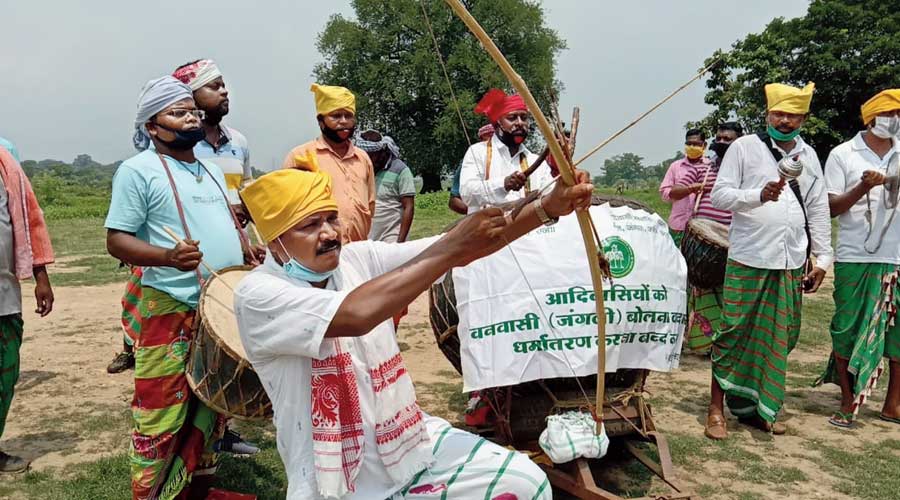 The 32 tribal groups of Jharkhand have decided to boycott the 2021 national Census if their longstanding demand for the inclusion of “Sarna” as a specific option in the column for religion is not accepted, community leaders have said.

They highlighted that with the Centre dropping the “Others” option from the religion column for Census 2021, Sarna adherents would be forced to either skip the column or declare themselves members of one of the six specified religions: Hindu, Muslim, Christian, Buddhist, Jain and Sikh.

“We have started an awareness campaign among tribal people at the panchayat and block levels about the decision,” Bandhan Tigga, Ranchi-based dharm guru (priest) of the Raji Padha Sarna Prarthana Sabha — a religious body of the Oraon, Munda and Santhal tribes — told The Telegraph.

“If necessary, we’ll launch a massive agitation not only in Jharkhand but also in other tribal states. There’s a ploy by the Centre to merge the tribal communities with the Hindus or other religious denominations, undermining their separate identity.”

Till 2011, people who opted for the “Others” option could also spell out their religion in words as, for example, “Sarna”, “tribal” or “Parsi”. But the official document counted them all merely as “Others”. Now the government has taken away even this option.

Karma Oraon, a tribal academic, alleged this was a BJP “conspiracy to bracket the tribal people with Hindus” and threatened to petition the Supreme Court against the Registrar-General of India, who oversees the Census, if a code for Sarna was not adopted.

Sarna followers are worshippers of nature. Only small numbers of people from Jharkhand’s 32 tribal groups — who make up more than 26 per cent of the state’s population — identify themselves as Christian, Hindu or Muslim.

The tribal communities have for decades been demanding a separate code for Sarna in the Census.

The demand was part of the Assembly election manifesto of the UPA, which wrested power in Jharkhand from the NDA last year.

Jharkhand Congress president and state finance minister Rameshwar Oraon had on Sunday, World Tribal Day, announced: “The Assembly will pass a resolution seeking recognition of a separate Sarna Dharma code and send it to the Union government.”

Karma Oraon, principal of the Bishu Bhagat Mahila College in Bero, Ranchi, said: “In the 1951 Census (the first in Independent India), ‘tribe’ was available as the ninth option under the religion column. It was later removed, leading to the tribe (members) being counted under different religions, which has caused great harm to the identity of the tribal people.”

He added: “Till 2011, a seventh option, ‘Others’, was provided and most tribal people opted for it. But now even that has been removed. We smell a conspiracy by the BJP-led central government to bracket tribal people with Hindus. We will file a PIL in the Supreme Court against the Registrar-General of India if we are not given a separate Sarna code.”

Dashmat Hansdah and Baiju Murmu, tribal heads of the Jugsalai and Kolhan zones, respectively, said they were ready for any agitation to safeguard their communities’ constitutional rights.

“We have been granted rights under Article 25(1) to practise our religion. If Jains and Buddhists, with smaller populations than tribal people, can have their separate religious codes, why can’t we?” Hansdah said.

Tribal groups from 19 states had staged a daylong agitation in Delhi last year demanding a separate Sarna code in the 2021 Census.