Proof that anti-malaria drug is a ‘game-changer’ still elusive

Hydroxychloroquine good for reducing inflammation, seems to work in early stages of infection; clinical trials on 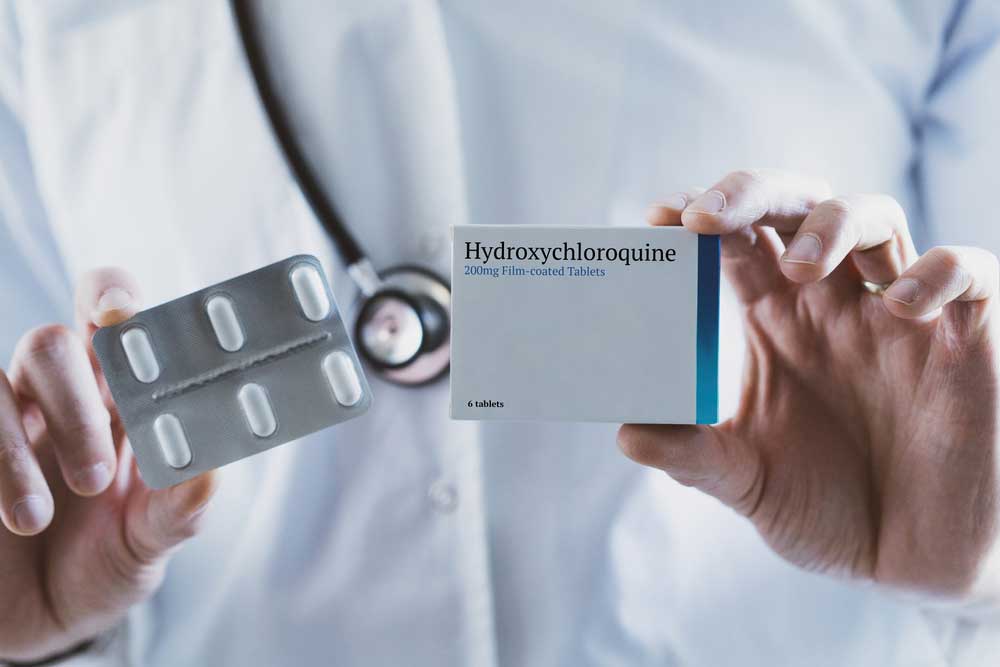 “It is too early to say if hydroxychloroquine has the potential or not to treat COVID-19. Today, there is insufficient clinical evidence to draw any conclusion,” said Sandra Silvestri, a top executive at French multinational Sanofi, which makes the drug.
Shutterstock
Published 11.04.20, 03:51 PM

US President Donald Trump has been aggressively promoting malaria drug hydroxychloroquine as a “game-changer” in treatment of Covid-19. But evidence the medicine works against the virus is scanty.

“It is too early to say if hydroxychloroquine has the potential or not to treat COVID-19. Today, there is insufficient clinical evidence to draw any conclusion,” said Sandra Silvestri, a top executive at French multinational Sanofi, which makes the drug.

Still, Trump’s endorsement of hydroxychloroquine’s off-label use for Covid-19 has thrust the decades-old generic into the limelight and been a boon for Indian drug firms which make 70 per cent of the world’s supply. The drugmakers are racing to fill orders from the US, Germany, Brazil and other countries around the world.

Trump’s enthusiasm for hydroxychloroquine was fired by a small French study of 42 coronavirus patients which concluded the drug was effective in lowering levels of the virus, especially when combined with the antibiotic azithromycin. The study, led by French celebrity virologist Didier Raoult, who has the reputation of being an iconoclast in the medical field, reported the cases showed a “significant reduction of the viral load” and “much lower average carrying duration” of the virus.

But other scientists found major methodological flaws in the study. Raoult has dismissed the criticism as “dictatorship of the methodologists” and says every Covid-19 patient at his hospital in the southern French city of Marseille gets hydroxychloroquine combined with azithromycin from the get-go -- a regimen he asserts has resulted in a very low death rate. Raoult’s embrace of the drug in defiance of the country's scientific establishment has won him rock-star prominence in France that was underscored when President Emmanuel Macron travelled last weekend to Marseillles to meet him.

Wuhan varsity study positive, but others not so

Another Chinese study was also positive about using the malaria drug for Covid-19. The randomised 62-patient study was conducted at Wuhan University’s Renmin Hospital -- Wuhan was the initial epicentre of the pandemic. Half of the trial patients received hydroxychloroquine while half got a placebo. The study found Covid-19 patients hospitalised with mild symptoms who took the malaria drug recovered faster than those given the placebo. “After five days of hydroxychloroquine treatment, the symptoms of patients with Covid-19 were significantly relieved, manifesting shortening in the recovery time for cough and fever,” Dr Zhan Zhang and colleagues reported. But they stressed “large-scale clinical research” was needed to support the findings.

Other studies of hydroxychloroquine, prescribed since the 1950s for treating malaria, lupus and rheumatoid arthritis, have found no similar positive effects. One 30-patient study by Shanghai University indicated the time it took for the virus to clear the bloodstream was comparable whether or not hydroxychloroquine was administered to the patients.

Another French study also turned up no evidence hydroxychloroquine was effective. Out of 11 study patients, one died, two were moved to intensive care, another suffered a major heart problem and doctors halted the trial early. While hydroxychloroquine kills viruses in the test tube, researchers report it did not eradicate the influenza virus or SARS in people in previous outbreaks. “In fact, in randomised controlled trials against a number of viruses, including influenza, it doesn't work at all (in people),” Douglas Richman, a University of California virologist, told British medical journal Lancet.

Trump’s own top infectious diseases advisor Dr Anthony Fauci, who appears with the president at White House briefings, has cautioned against his boss’s hyping of the drug, saying evidence for its efficacy is purely “anecdotal.” Trump, though, repeatedly has asked Americans: “What have you got to lose?” in trying out the drug.

Actually, hydroxychloroquine has plenty of significant potential side-effects, including irregular heartbeat, liver and nerve damage and suicidal thoughts. Overdoses by people attempting on their own to ward off Covid-19 have been reported in the US, Nigeria and Vietnam.

Jeremy Faust, a US emergency physician at Boston’s Brigham and Women’s Hospital, last weekend, sought to douse enthusiasm for using hydroxychloroquine as a preventive drug against the virus, tweeting: “Patients with lupus, arthritis, other conditions are *already* on hydroxychloroquine. And we are diagnosing them with Covid-19 LEFT AND RIGHT.” But with no established Covid-19 treatments, doctors are practising “battlefield medicine,” administering any drug or combination of drugs to Covid-19 patients that might potentially save them.

In a bid to settle debate over the drug, the US National Institutes of Health (NIH) just announced a randomised, double-blinded clinical trial, considered the gold standard, to see whether hydroxychloroquine has any impact on Covid-19 patients.

The study of more than 500 adults is one of over 50 clinical trials underway globally. “Many US hospitals are currently using hydroxychloroquine as first-line therapy” for patients “despite extremely limited clinical data supporting its effectiveness,” said Wesley Self, the NIH trial leader. “Thus, data on hydroxychloroquine for the treatment of Covid-19 are urgently needed.” The US Food and Drug Administration, meanwhile, has approved experimental use of hydroxychloroquine to treat Covid-19.

Some scientists hope the drug might be valuable in reducing inflammation. Aside from malaria, hydroxychloroquine is used to treat lupus, rheumatoid arthritis and other auto-immune system disorders in which the immune system becomes hyperactive and turns against the body, damaging vital organs. Covid-19, in some instances, appears to trigger the immune system to become overactive, producing potentially lethal respiratory symptoms as the lungs become inflamed.

At New York’s Mount Sinai South Nassau County branch, though, doctors have been administering the hydroxychloroquine-azithromycin regimen “pretty much since day one,” chief medical officer Dr Adhi Sharma said. “We’ve been throwing the kitchen sink at these patients,” he told The New York Times. “I can’t tell whether someone got better on their own or because of the medication.”

While there’s no proof hydroxychloroquine works against Covid-19, the Indian Council of Medical Research has recommended use of the drug for healthcare workers as a potential preventive as well as for families of Covid-19 patients. (The drug has long been used to ward off malaria). Among trials being planned to test whether malaria drugs can be used prophylactically against Covid-19 is one by the Bill & Melinda Gates Foundation that will be carried out in North America, Africa and Europe.

The big winners from hydroxychloroquine demand surge have undoubtedly been Indian pharmaceutical companies which make the drug. Shares of Ipca Laboratories, the top manufacturer globally of hydroxychloroquine, have soared in value. Washington is so eager for hydroxychloroquine that the Food and Drug Administration has waived its ban on import of the drug made at Ipca’s plants though the company has warned investors the prohibition could be reimposed if the US no longer needs as much of the drug.

The FDA banned imports from three IPCA sites in 2017 over drug-test manipulation. India currently needs 24 million tablets a year for illnesses for which the drug is prescribed -- malaria, lupus and rheumatoid arthritis -- and has capacity to make hundreds of millions of tablets a month, the Indian Drug Manufacturers’ Association says. Indian drugmakers insist they have more than enough capacity to meet demand for people with malaria and rheumatic diseases as well as for Covid-19 treatment in India and around the world.

Many doctors suspect that if hydroxychloroquine has a benefit against Covid-19, it may work best in the early stages of the illness as do other antiviral treatments such as Tamiflu which acts by lowering the amount of the virus in the body. Doctors report anecdotally that giving the drug to patients in intensive care doesn’t seem to help. But even if hydroxychloroquine only works early on in treating Covid-19, it would be a big boost to fighting the illness given that the drug is already licensed, widely available, readily deployable and low-cost as it’s a generic.