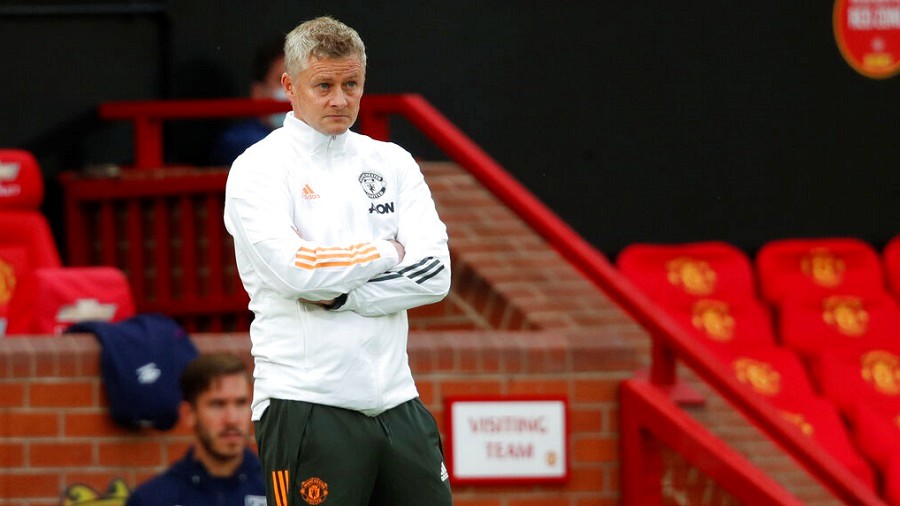 Manchester United eased the pressure on manager Ole Gunnar Solskjaer with a 3-1 win at Everton in the Premier League on Saturday with Bruno Fernandes scoring twice and Edinson Cavani grabbing his first for the club.

United have failed to win at home in the league this season and there were questions over Solskjaer’s future after the midweek defeat to Istanbul Basaksehir in the Champions League.

The loss was the third straight defeat for Carlo Ancelotti’s side.

The pressure on Solskjaer intensified when Everton took the lead in the 19th minute with Brazilian winger Bernard’s low drive through Aaron Wan-Bissaka’s legs squeezing in the bottom corner. Six minutes later though, United drew level when Fernandes met a Luke Shaw cross from the left with a perfectly angled and firm header.

Everton left back Lucas Digne then struck the post from a promising position but United were growing into the game. Fernandes floated in a cross from the left which Marcus Rashford rose to head into the bottom corner but although the striker failed to connect, the ball went in off the post. Substitute Cavani added the third in stoppage time, finishing off a counter-attack led by Fernandes.

Solskjaer later hit out at the fixture planners. United did not return from a Champions League match in Istanbul until early on Thursday morning but were given the early lunch-time slot for their trip to Goodison Park.

“We were set up to fail. The kick-off time set us up to fail. We have been to Turkey, played loads of games this season already, we got back Thursday morning and we are playing Saturday lunchtime. It’s an absolute shambles,” said the Norwegian.

“These boys deserve better. Luke Shaw has got injured because of it. It’s a hamstring which might be a long one and Marcus Rashford might be struggling,” added the United manager.

Leeds United suffered another a heavy defeat with a 4-1 loss at Crystal Palace.

Marcelo Bielsa’s side were beaten by the same scoreline at home by Leicester City on Monday.

Scott Dann headed Palace into a 12th minute lead with a thundering header from an Eberi Eze corner.

Palace then doubled their lead with a brilliant free-kick from Eze, his first goal for the club. Patrick Bamford made it 2-1 but Palace restored their two goal advantage, just before the interval when Helder Costa’s sliding tackle deflected a low cross from Wifried Zaha inside the near post, confounding Leeds goalkeeper Illan Meslier.

Southampton moved into first place in England’s top flight for the first time since 1988 after a comfortable 2-0 home victory over Newcastle United on Friday.

Che Adams volleyed the hosts into a seventh-minute lead and the only surprise was that it took them until the 82nd minute to double their advantage as Stuart Armstrong fired into the net.

The margin of the defeat flattered Newcastle who offered next to nothing as an attacking force.

Southamptons fifth league win of the season moved them to 16 points from eight games and above champions Liverpool on goal difference.

This time last year Saints manager Ralph Hasenhuttls job looked on the line after a 9-0 thrashing at St Marys by Leicester City — a record away win in the English top flight.