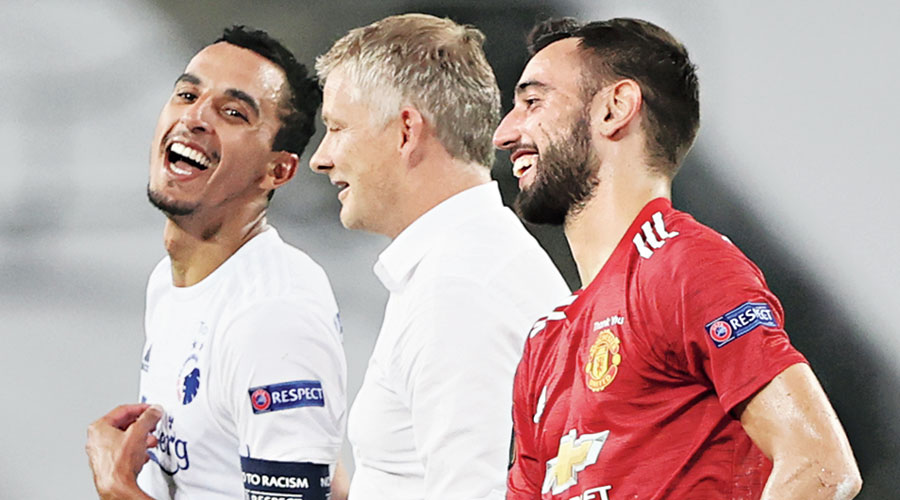 Manchester United were forced to dig deep to reach the Europa League semi-finals as Portuguese midfielder Bruno Fernandes converted a 95th-minute penalty to secure a 1-0 win over a stubborn FC Copenhagen side after extra time on Monday.

Copenhagen, whose goalkeeper Karl-Johan Johnsson put up an inspired performance, dominated the opening half and missed several chances. Being on the back foot in the opening half spurred United into action though and they created a flurry of chances after the break.

Fernandes settled the contest in extra time when he drilled his spot-kick past Johnsson after Anthony Martial, who saw several sitters thwarted by the ’keeper, was fouled by Andreas Bjelland.

United manager Ole Gunnar Solskjaer, chasing his first silverware as United boss, is hoping a repeat of their League Cup semi-final defeat by Manchester City and FA Cup last-four loss to Chelsea will not be repeated in Cologne on Sunday.

“We need to be more clinical in knockout games,” Solskjaer said. “I am delighted we are through to another semi-final for this team and the next challenge is to go one step further, and then hopefully win the last one (the final), too.”

Atalanta, from the city of Bergamo in Italy, will take on Paris St Germain on Wednesday in the match that kicks off the Champions League Final Eight in Lisbon.

It will be a poignant moment. At the height of the coronavirus outbreak, Bergamo’s hospitals were overwhelmed by infected people and, with morgues unable to keep up, convoys of army trucks carrying away the dead became a chilling symbol of the global pandemic.

“We will play with Bergamo and for Bergamo, this will give us extra strength,” midfielder Remo Freuler told the Eco di Bergamo newspaper.

In many ways, Atalanta and PSG are polar opposites. Atalanta’s entire transfer spending for the 2019-20 season was around 57 million euros ($67 million); PSG spends lavishly, like dishing out a record 220 million euros ($259.36 million) for Brazilian Neymar alone.