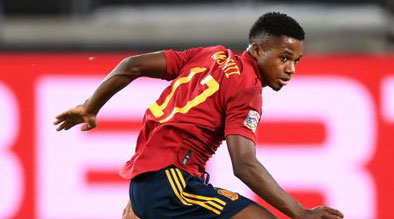 Spain coach Luis Enrique was taken by surprise by the self-confidence and spark he saw in teenaged forward Ansu Fati, who became his country’s youngest ever goalscorer by netting in a 4-0 win against Ukraine in the Uefa Nations League on Sunday.

Fati, who turns 18 on October 31, turned in a sensational all-round display in his first start for Spain and struck his first goal for his country to make it 3-0 in the 32nd minute with a superb effort from outside the area which went in off the post.

“It’s not normal for him to have this spark and self-confidence at this age. But we’ll try to manage that so he can help the team as much as possible, just as he did today (Sunday),” Luis Enrique said.

Sergio Ramos had given Spain an early lead by converting a penalty earned by Fati and the defender struck again with a header, while substitute Ferran Torres rounded off an outstanding team display.

Yet Fati was the unmistakeable star and his goal saw him break the late Juan Errazquin’s record as Spain’s youngest goalscorer that had stood for 95 years.

Errazquin scored his first goal against Switzerland in 1925 at the age of 18 years and 344 days.

Fati did not waste his time in making his mark on the game, winning a penalty after bursting into the box from the left wing after effortlessly nutmegging an opponent.

“Even though I know him well and what he’s capable of, I can’t say I’m not surprised,” added the coach.

Fati, who was born in Guinea-Bissau but moved to Seville in Spain aged six with his family, became Spain’s youngest player in 84 years when he made his debut in last Thursday’s 1-1 draw away to Germany.

He became Barcelona’s youngest ever goalscorer in La Liga last year with a goal against Osasuna and also became the youngest ever scorer in the history of the Champions League by netting against Inter Milan in December.

Yet Luis Enrique brushed aside any concern that the forward’s outstanding achievements so soon in his career could distract him from continuing to grow.

“At this age it’s easy for all the praise to go to your head but he’s mature enough to know that the path he is taking at the moment is the one he needs to stay on to develop as a player,” he added.