The film frontlined by Prosenjit and Dev, celebrates life 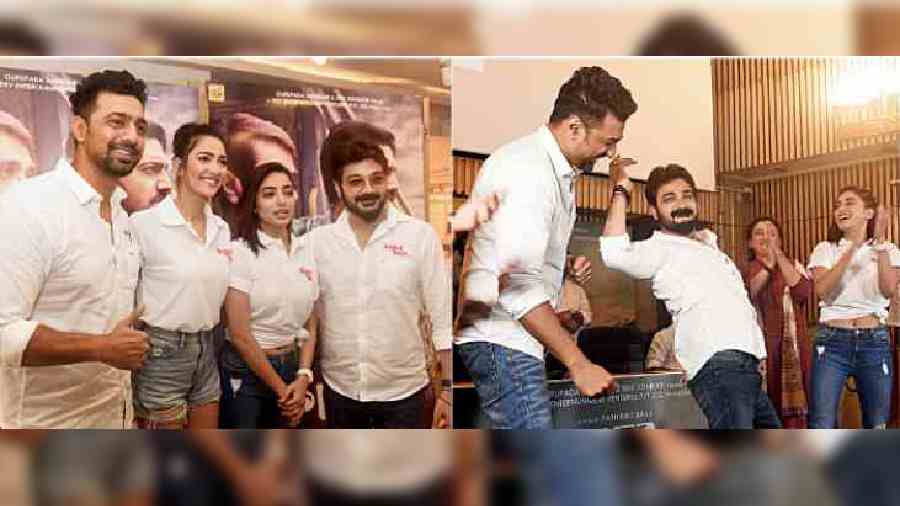 Team Kacher Manush got together to launch the trailer of the film produced by Dev Entertainment Ventures at Nandan III. A meditation on life and death, the September 30 film, directed by Pathikrit Basu, brings together superstars Prosenjit and Dev. Kacher Manush also  stars Ishaa Saha and Susmita Chatterjee. The film follows Dev’s character who is weighed down by the demands and complications of life. Soon he meets Prosenjit’s character, an insurance agent, who gives him a plan to end his life, so that the insurance money can be used to treat his ailing mother. But things take a turn soon and Dev’s character finds meaning and purpose in life when he meets someone special (played by Ishaa Saha). “Dev is like my younger brother and I was very happy when he approached me for Kacher Manush. When Pathikrit started telling me the story, I stopped him midway. The subject is very close to my heart. I told Dev that I was doing the film. This is not just a film, it has a very relevant social message,” says Prosenjit.

“I had told Pathikrit that if Bumbada doesn’t do the film, I will not produce it. I had called up Bumbada and told him that the film will become really special once he is a part of it. Bumbada loved the storyline and he was on board. This is an honest effort. The film is full of life... and the ‘kacher manush’ always motivates and inspires one in life,” says Dev.