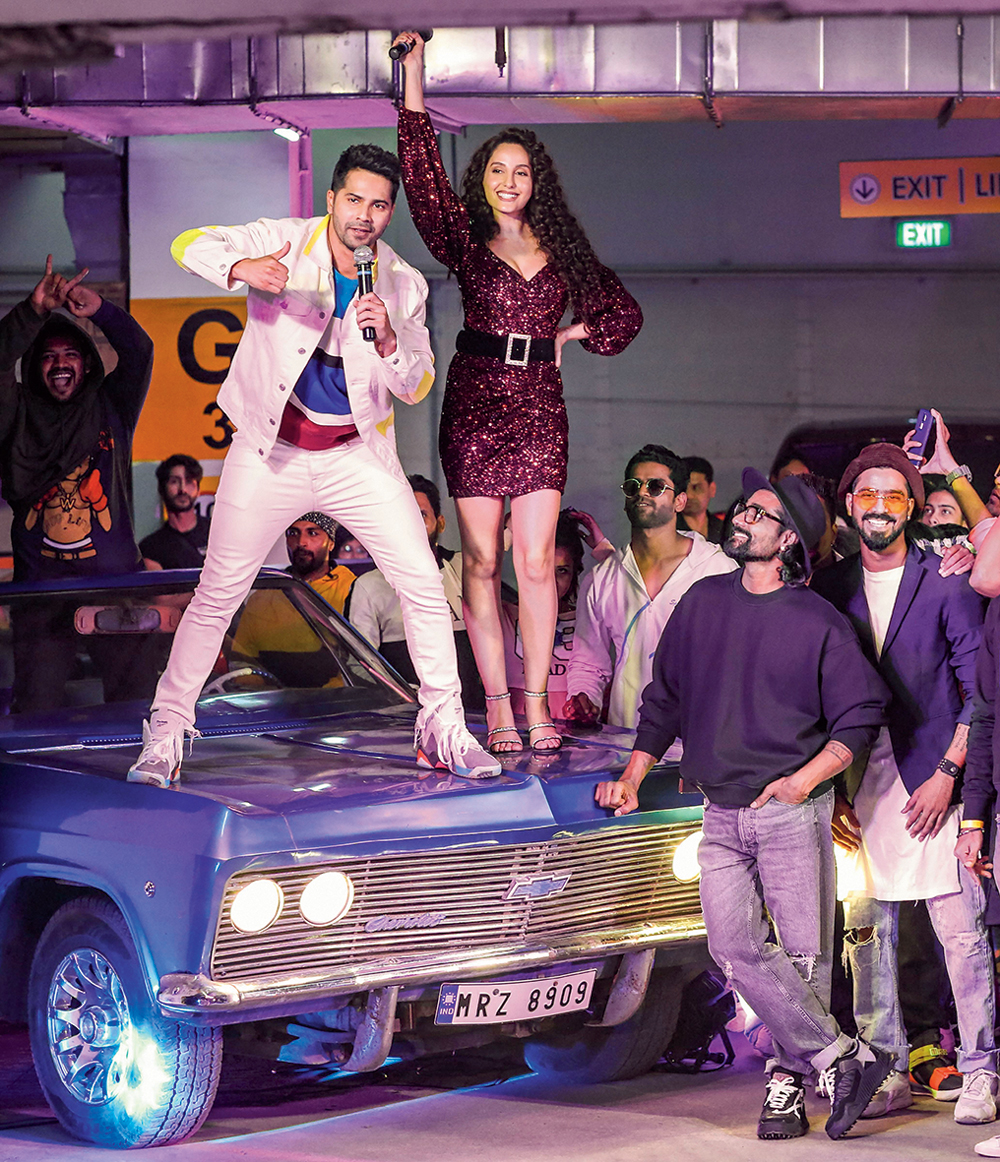 Street Dancer 3D’s Varun Dhawan, Nora Fatehi and director Remo D’Souza were at the Garmi song launch in Mumbai on Thursday. So were us. Excerpts from the media interaction with the dancing trio…

How was it working together?

Nora: Someone had asked me, ‘Who would you want to do a film with?’ and I had said, ‘Varun Dhawan’. I think our energies are the same, we are both crazy and very happy people. We love what we do and I just knew our chemistry would be fire. Aur humne aag laga diya (laughs).

Varun: Yes, we are both very hyper and happy people.

How does it feel looking at people giving the film’s trailer and the songs so many hits on YouTube?

Varun: We are always worried thinking if people would like it or not. Everybody puts in hard work but we genuinely did that in this film. The song Garmi was shot in 2°C in the UK. It was so cold there! I got my first injury - a shoulder tear - while shooting this song. You can’t see it in the song but they fling me back and I shot that three or four times.

Remo: Everyone has worked really hard and got injured in this film because it’s dancing...

Nora, directors are considering you as their lucky mascot and you’re being appreciated for your work...

Nora: It’s surreal. Sometimes I feel very happy and sometimes I get very scared because I don’t want this to end. I want this to keep going. If I look back three years ago, I remember sitting alone in my room very frustrated and upset because I wasn’t getting the work I wanted and people were not recognising my talent. And I remember telling myself, ‘Mera time bhi ayega’. I came from outside and wasn’t an industry kid... so I’m really grateful and I have a big appetite. I just want to prove myself and I hope there are many more directors out there who have the courage to work with me because I have a lot to offer. I can’t wait. And now I want to know how did Varun Dhawan feel like while doing a song with me...

Nora: The vibe and attitude of this song is very fierce, carefree and confident. This is something that you will see in any international dance film when you have a face-off in a club or underground... you have that attitude and body language. I think everyone in this song Varun, Raghav (Juyal), Dharmesh (Yelande), me... we really displayed that vibe that was necessary for this song.

We’ve seen western dance movies like Step Up. What value addition are you bringing to the table in an Indian dance film that we haven’t seen before?

Remo: I keep getting these questions. You never ask such questions for a love story or an action movie. I am not proving anything to anyone. It’s an Indian film, the story is India’s, the artistes are Indian and we have made it with a lot of heart. Our Indian dancers have proved themselves in the world stage too.

Varun: In the next 10 years, India is going to take over the dance scene, it’d be world domination. Dancing wasn’t even considered a profession before! Remo sir is a dancer himself and he started as a background dancer. It’s so hard when society doesn’t even look at dance as a career. But it is work! Dancers work so hard, they wake up early, take the train and come for practice. Sometimes they just dance on the street... this film is for all the dancers! If you can feel the music, then anybody can dance.

A line in the song goes, ‘Baki saare fake lage, dekh ke tujhko break lage’. When was the time when you had a heartbreak?

Nora: Why? Just because I’m single? I want to know when you faced a heartbreak...

Varun: I have faced a heartbreak in college. But that time break nahi laga tha, gadi ne aur bhi raftaar pakad li thi! She isn’t a known person, she was a normal girl and I obviously don’t want to name her.

When do you feel garmi even when the air-conditioner is on?

Varun: Back in school, I knew I had not done well in my maths exam and I would fail. I was sitting with my parents at home and I was sweating even when the AC was on. My mom asked, ‘Kya hua?’ and I said, ‘Hua nahi, abhi hoga. The report card will come now’ (laughs).

Nora: When I am in the audition room and in front of the camera and the casting director says, ‘Action!’, I go all oh my god.

Varun: I was very nervous when I had to dance with Prabhu sir (Prabhu Deva). I came with full confidence but my knees were all bent in front of him, couldn’t stand straight.

Street Dancer 3D is releasing on January 24 along with Ashwiny Iyer Tiwari’s Panga. What’s your take on the clash?

Remo: I watched the trailer and it’s a very nice trailer. I have no tension because these two films are of different genres — this is a dance film and that’s on sports.

Varun: I have known Kangana (Ranaut) for a lot of years and admire her work. The films are very different and the year is 2020... we can’t talk about clashes anymore. We need to be cool about it and move ahead. If people like the film, they should go watch both films.

Do you think Bollywood is finally giving its due to dance films?

Remo: I remember I always wanted to make a dance film. I think Naache Mayuri (1986) was the last dance film I remember. Before that, there were Jhanak Jhanak Payal Baaje (1955) and Navrang (1959). Disco Dancer wasn’t really a dance film, he was a singer. There was very less dance in the films. So, I eventually made ABCD and now this...

Varun: There’s a big issue the film is highlighting and that was the reason I did this film. Dance is not just for enjoyment, you can express and change a lot of people’s lives with it. It’s a world issue and a tricky matter on how to handle it.

Did you have to do some special preparation to act in a 3D film?

Varun: It’s a technical thing shooting a 3D film. It’s all about the angles while shooting, you keep a lot of stuff in the foreground. We shot in an airfield with Nora and we shot with Shraddha (Kapoor) at The O2 arena. We would keep the props in the foreground and we’d be little at the back. You need to maintain the distance and the mark, that’s it.