Advertisement
Home / Entertainment / Harry & Meghan: Duke and Duchess of Sussex reveal why they split from the royal Family

Harry & Meghan: Duke and Duchess of Sussex reveal why they split from the royal Family 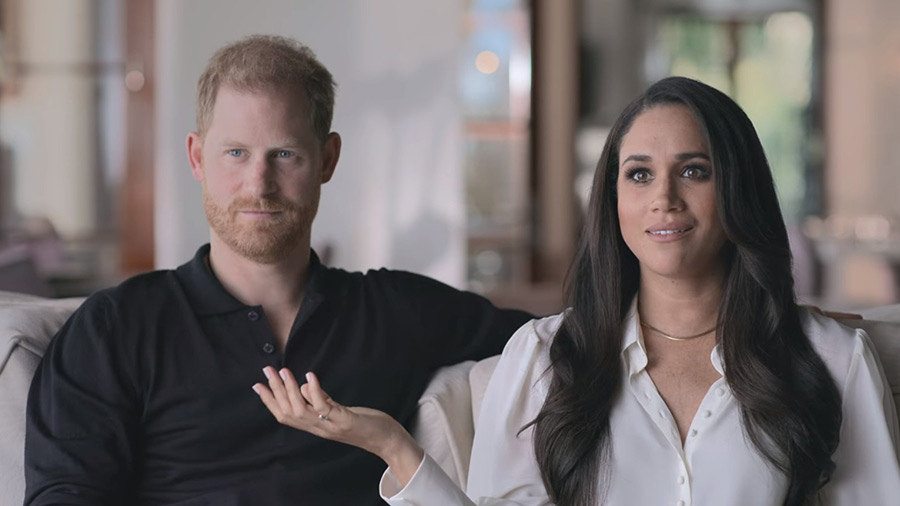 That Prince Harry and Meghan Markel are still lovebirds comes as no surprise in the final three episodes of the Netflix series Harry & Meghan. But what makes these episodes eyeball-grabbing is the washing of the British royal family’s dirty linen in public and some of the most intimate details that expose a deep schism inside Buckingham Palace.

Here’s how Harry & Meghan Volume 2, which is streaming on Netflix from December 15, traces royal marriage protocols, stifling atmosphere in the palace, media circus and the winds of change in the aftermath of the couple’s exit from the family.

“I don’t know how I was so calm. And all I wanted was a mimosa, a croissant, and to play the song Going to the Chapel,” Meghan is heard saying as she talks about the day of her marriage with Harry. The couple got married on May 19, 2018 at St George’s Chapel at Windsor Castle in the UK. The historic marriage saw Meghan becoming the first mixed-race member of the royal family. King Charles III was the one to walk Meghan down the aisle after the former actress’s public fallout with her father.

“Harry’s dad is very charming,” said Meghan as she recalled how the current monarch chose the orchestra and the gospel choir for the wedding. A fun reception and an exhausting session of dancing later, Prince Harry, then third in line to the British throne, and commoner Meghan Markel were united.

The beginning of the end

While members of the royal family have always enjoyed public love and support, the love pouring on the newly married couple was quite unmatched. Much like Princess Diana, who was popularly known as the People’s Princess, Meghan’s popularity grew among the masses. The comparison between the two is made clear by Prince Harry himself as he continued to describe how the Duchess of Sussex’s newfound popularity created tension within the family ranks. “The issue is when someone who is marrying in, who should be a supporting act, is then stealing the limelight, or is doing the job better than the person who was born to do this. That upsets people. It shifts the balance.”

Things turned worse when the late Queen Elizabeth II was replaced by Meghan and Prince Harry on the front page of newspapers when they attended the same event. The longest-reigning monarch’s diminishing popularity proved a problem for the royal family, fomenting a press war that prompted tabloid articles against Prince Harry and Meghan.

The documentary compares the media coverage of Meghan’s first pregnancy versus Catherine’s. While the Duchess of Sussex was roasted by tabloids for cradling her bump and eating avocado, the Duchess of Cambridge had been loved by the media when she was pregnant.

Prince Harry said he thought the negative press attention and racist propaganda would disappear soon — just like it did for other family members — as he shared the same press office with his brother. “William and I both saw what happened in our dad’s office, and we made an agreement that we would never let it happen to our office,” Prince Harry revealed, referring to the aftermath of his parents’ divorce and the negative media attention his mother — Lady Diana — had to face. However, the promise was broken by not only Prince William but also the present King of England whose offices leaked confidential information regarding Prince Harry and Meghan.

Falling out with family members

Since the announcement of her engagement with Prince Harry, Meghan had found herself in the middle of her most public spat with her father, Thomas Markle. The Duchess revealed that she had written a letter to her father on the instructions of the late Queen and Prince Philip. The letter was simultaneously leaked by the press, leading to a three-year court battle.

After deciding to shift base and possibly giving up their titles, Prince Harry was invited to a crisis summit in January 2020 in front of the Queen. “It was very terrifying to have my brother scream and shout at me and my father say things that were just simply untrue. My grandmother quietly sat there and sort of took it all in,” Harry said about the meeting.

The Duke of Susexx also revealed that a joint statement, which was issued soon afterwards, denying the brothers’ crumbling relationship was totally false as the whole thing had been done behind his back.

The aftermath of their exit

Not only did the couple deal with the negative media attention after their decision to leave the royal family, they were also dealing with a court battle regarding the leaked letter. It was during that time that Meghan had miscarried their second child. “I believe my wife suffered a miscarriage because of what the (Daily) Mail did. I watched the whole thing,” Prince Harry claimed in the documentary.

It is evident throughout the documentary that the couple blame the negative press and lack of support from the Royal Family as the primary reason for their exit. The Duke of Susexx still misses his earlier life. “Yeah, I mean, I miss the weird family gatherings when we’re all sort of brought together under one roof for, you know, certain times of the year. That I miss. You know, being part of the institution meant that I was in the UK. So I miss the UK. I miss my friends,” he said.