Darker the better in DC universe

Joaquin Phoenix's Joker - character and movie - was relentless in the depiction of the dark, dark world 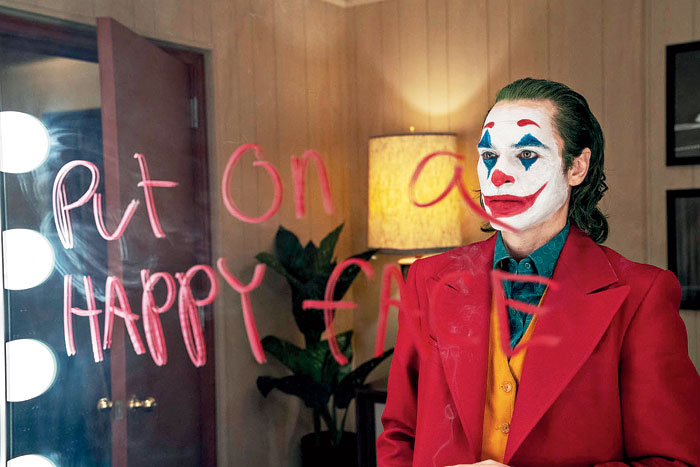 My cousin told me an interesting story.

After we watched Joker in Thiruvananthapuram, we had discussed the film in the auto taking us home. The film’s name wasn’t mentioned, there being no need as it was fresh in our mind. After I got off and it was just my cousin and the driver in the vehicle, the latter asked, 'Was it Joker that you saw?' He continued, 'I saw its trailer on YouTube and went to watch the movie. Good acting. Sixty per cent, he will get an Oscar.'

As of November 14, 2019, the list of the highest grossing 50 films, as available on Wikipedia, ranged from Avengers: Endgame with $2.79 billion earned to Jumanji: Welcome to the Jungle with $962 million. In between were 48 other films, many of them belonging to franchises watched by families, most in the realm of fantasy and several in the animation genre. Placed 43rd on the dynamic list was 2008’s The Dark Knight, the movie that drove the Joker home and won a posthumous Oscar for Heath Ledger. His Joker was a psychological villain; where previously the Joker had been merely clown’s mask, Ledger made it a face inviting us to know its making. Joaquin Phoenix’s Joker of 2019 took us straight into that tortured origins story. Thanks to plenty of violence, it became R-rated. Positioned 44th on the list of highest grossing movies with $988 million made at the box office, it was set to enter the billion-dollar league which currently commences with The Dark Knight. If that happens, Joker will be the first R-rated movie to achieve the distinction. In October 2019, it surpassed Deadpool to be the highest grossing R-rated movie.

Joker was an intense experience. You don’t expect anything less in a film starring Joaquin Phoenix. But the question I came off with was - can 'intense' alone make a movie watchable? The Dark Knight was a turning point and all turning points are a composite of straight line till then and the critical twist or turn, for if you remove benefit of contrast and dwell wholly on either straight line or twist - what’s the point? Depiction of the Joker before Ledger’s shot at it had bordered on caricature. Jack Nicholson brought villainy but his Joker remained firmly a character in comic book universe. It was Ledger who first altered that and as science fiction is to today’s technological reality, made us imagine the potential for reality in comic world-dystopia. His Joker was a tortured, demented human being and essayed so, the character got under our skin. A crucial component enabling the praise Ledger got for that portrayal is that he was the twist in a line of Jokers before. His Joker was also not the dominant protagonist in The Dark Knight; much like the supporting actor-Oscar he got, he remained one among several characters in the film. Such spacing is essential to notice characters distinctly and appreciate a role well done.

Joaquin Phoenix is a good actor. But his Joker - character and movie - was relentless in the depiction of the dark, dark world. Forget the overwhelming nature of this onslaught, the disservice it does is that it prevents a good piece of acting from being seen as such. There is no punctuation in idiom for pause, there is no relief. It is one long, bleak tunnel of injustice, the suffering that precedes the Joker’s ascent. The pain conveyed isn’t just physical; there is mental anguish that you feel. And when the Joker’s rise as a distinct character occurs, it is against a backdrop of urban rioting, exactly the sort of anarchy sections of society, settled well into comfort, fear nowadays. It is architecture of carefully chosen ingredients. For a minute, let’s keep all the marketing stunts driving audiences to theatres, aside. That such a movie is poised to break into the billion-dollar league likely speaks something of the market. The film was intense, well-acted and profoundly dark. Our lives in general may not be so. But given empathy betrays a seed in that line, doesn’t it hint of bleakness lurking in our imagination?

The right blend in such conclusion is probably that the film speaks as much of the market as it does of the DC world of comic book characters. Arguably, DC hasn’t been as successful as Marvel at the movies, at least in the recent times. Past the first flush of Superman and Batman movies, DC’s has become a slightly darker world and for some time it has tottered unsure what direction to pursue. Should it get gloomier and more realistic? Or should it court a lighter state of existence, where Marvel has already taken the lead? With Joker, that indecision appears put to rest. Not only does DC seem to have taken a direction, it has done something its competitors didn’t - make a movie around an utterly negative character. And it did that Ledger style and Oscar-shaded with potential criticism of overdoing it. I came off Joker rather tired, maybe even glad the movie got over. But I am curious to see what DC does with its basket of villains and anarchists. There is one we all know of - Harley Quinn, 'frequent accomplice and lover of the Joker' as Wikipedia puts it. A film showcasing her - Birds of Prey - is due for release in 2020.