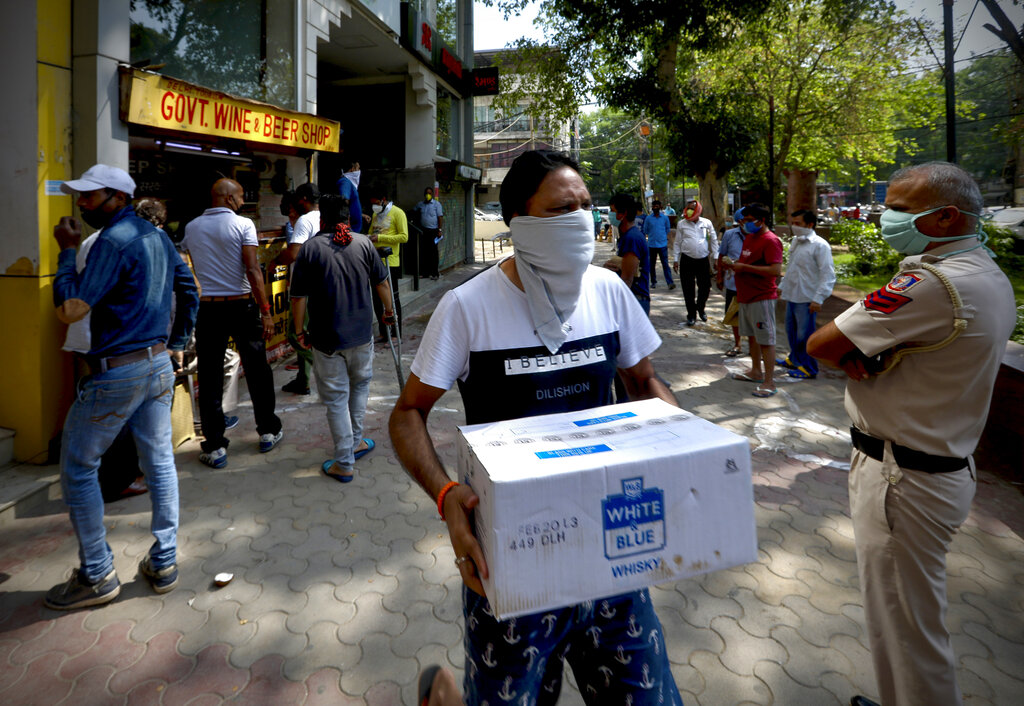 Many government-run liquor shops, which opened after a gap of over 40 days in the national capital on Monday, had to be shut as people who gathered outside the outlets did not follow social distancing norms, and the police had to use mild force in some cases to disperse the unruly crowd.

People queued up in large numbers in the morning at the liquor shops.

According to an official, about 150 government-run liquor shops have been allowed to open from 9am to 6.30pm in accordance with the latest lockdown relaxations given by the ministry of home affairs (MHA).

Many people were not aware that only government shops were allowed to open.

In most areas including Burari, Mayur Vihar, Gandhi Vihar, Rohini and Janakpuri, a large number of people had lined up outside outlets.

An official said an alcohol vendor had to be shut down in Mayur Vihar in east Delhi as people failed to maintain social distancing norms. Similar cases were reported from north and central Delhi.

With people gathering in large numbers, the police had to resort to mild force.

'Shops were asked to shut in places where social distancing norms were violated. At some places, mild force was also used to disperse the crowd,' a senior police official said.

Liquor shops in Karol Bagh, Daryagang and DB Gupta road in central Delhi were shut by the police after crowds, gathered to purchase liquor, did not maintain social distancing norms, said another senior police official.

While liquor shops in Anand Parbat and Ranjeet Nagar did not open, liquor vends in Paharganj area which opened at around 9am was closed by 12 noon as people gathered there failed to maintain social distancing norms, said another senior official from Central district.

In northeast Delhi, liquor outlets in Jyoti Nagar and Dayalpur were also closed within an hour after it opened due to overcrowding and violation of social distancing norms, the police official.

'A large number of people gathered even before the shop opened at around 10am and within minutes, we asked the liquor shop to shut,' said a senior police official from Shahdara district.

Deputy commissioner of police (East) Jasmeet Singh said, 'Two liquor shops opened in Kotla village, Mayur Vihar and Khichripur in east Delhi between 9 to 10 am. However, they were closed within 15 minutes after people did not follow police instructions. No marshal was deployed in these shops.'

In Khichadipur, people barged inside one of the shops to buy liquor, he said.

There were many who waited outside liquor shops but were not lucky enough.

Amit, in his late forties, had come all the way from Paharganj to buy liquor from a vend in Gole Market, but without any luck. The area has three alcohol shops. With a large number of people gathering, the police dispersed the crowd.

'They (liquor shops) have said they will open the shop after 12 noon. I will wait until then,' an unrelenting Amit said, refusing to go as he sought refuge in a lane.

Outside another liquor shop behind the Regal Cinema, a police volunteer pasted a notice 'The shop will not be opened until further notice'.

Atul Gupta, who had come there from the trans Yamuna area, said he had come in the hope of buying alcohol, but with no luck.

A police constable waiting outside the shop said they had to disperse people as a large number had queued outside, without heeding to the social distancing norms.

Delhi government earns revenue of Rs 5,000 crore from the sale of liquor.

The government has directed four state-run agencies, which are responsible to sell liquor, to deploy adequate marshals at these shops.

There are around 850 liquor shops in the city including those run by government agencies and private individuals. In an order on Sunday night, the excise department also directed officials to identify liquor shops, which are being run by private individuals (L-7 licensee) and fulfil conditions laid down by the MHA.

The officials have been asked to submit a report within three days. The government has so far allowed only those liquor shops (L-6 and L-8) to operate which are being run by four state-run agencies.

'All liquor shops in malls and markets will remain closed. The government-run shops allowed will operate from 9 am to 6.30 pm. The four agencies will deploy marshals to ensure that not more than 5 people are present at one time at the shop,' the official said.

The department has asked agencies to coordinate with the local administration and police to maintain law and order. According to the order, bonded warehouses have also been allowed to resume operation from 7 am to 6.30 pm.

The agencies will have to give an undertaking stating that liquor shops being allowed to open will fulfil all MHA guidelines, according to the excise department.