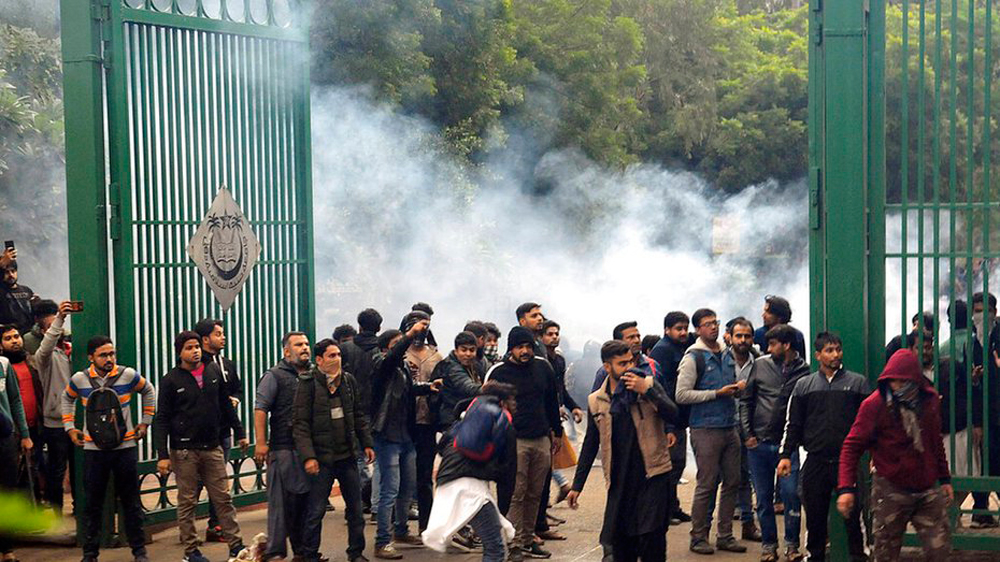 In this December 13, 2018, file photo, police use tear gas to disperse students protesting outside Jamia Millia Islamia against the Citizenship Amendment Act in New Delhi. The Delhi HC will hear cases related to police atrocity on June 12.
PTI
PTI   |   New Delhi   |   Published 05.06.20, 11:44 AM

The Delhi High Court on Friday said it will hear next week the pleas related to the violence during Jamia Millia Islamia University protests against the Citizenship (Amendment) Act (CAA) in December last year.

A bench of Chief Justice D.N. Patel and justice Prateek Jalan listed the matter for June 12 after senior advocate Colin Gonsalves and lawyer Sneha Mukherjee, appearing for the petitioner, sought time to file rejoinder to the Delhi police's affidavit, which was submitted on Thursday.

The hearing was conducted through video conferencing as the functioning of courts have been restricted due to the Covid-19 pandemic.

Delhi police, represented through advocates Amit Mahajan and Rajat Nair, sought dismissal of pleas seeking quashing of FIRs and directions against alleged police brutality in the university during the anti-CAA protests.

It said the petitions were an utter abuse of PIL jurisdiction as the incidents of violence in and around the campus were well-planned and orchestrated by some persons with local support.

The plea sought actions against the alleged ruthlessness and excessive use of force and aggression unleashed by police and paramilitary forces on students within the university.

Opposing a batch of PILs seeking setting up of a judicial commission to look into the violence, the police have said the claim of brutality is utter falsehood.

The police have filed the affidavit in response to various petitions, moved by lawyers, students of JMI, residents of Okhla in south Delhi, where university is located and the Imam of Jama Masjid mosque opposite Parliament House, in which they had also sought medical treatment, compensation and interim protection from arrest for the students.

The pleas have also sought registration of FIRs against the erring police officers.

The affidavit filed by Rajesh Deo, deputy commissioner of police, Crime Branch, said exercising fundamental right to dissent should be respected, but no person can be allowed to commit breach of law, indulge in violence, arson and riotous activity causing danger to life, limb and property of innocent citizens under the garb of exercise of fundamental right of free speech and assembly.

Such fundamental rights are not absolute and are liable to reasonable restrictions under the Constitution, it said.

Under the garb of organising a protest, it is completely impermissible for the citizens to create law and order situation and to lay a siege and paralyse the day to day activity of fellow citizens who are completely unconnected with the cause for which protests are organised by a section of the society, it said.

The police said that videos and photographs collected by it show that under the garb of student protest, it was a well-planned and orchestrated attempt by some persons with local support to intentionally perpetrate violence in the area.

It said the evidence showed that there was large scale violence, arson and stone pelting on December 13 and 15, 2019, which resulted in lodging of three FIRs.

Regarding the prayer in the petitions to frame guidelines on use of force to govern the conduct of police personnel in such cases, the affidavit said it is not maintainable and added that due procedure/standard protocol was followed by the police authorities to control the unruly mob and to maintain law and order in the area.

On the violence incident of December 15, the affidavit has said, police received input that some former students and other persons will assemble at JMI for protesting CAA and NRC and will go to Parliament and the President's House.