Advertisement
Home / Culture / Why Bangladesh is the mirror image of Pakistan 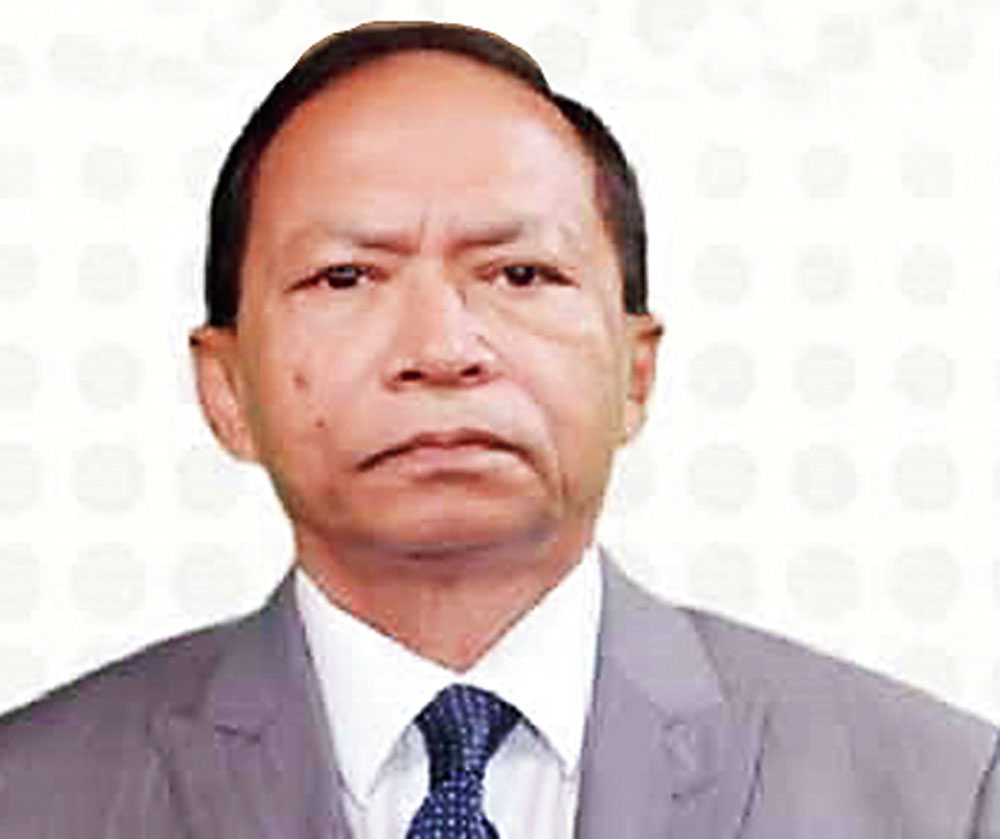 In his autobiography, A Broken Dream: Rule of Law, Human Rights and Democracy, Sinha has written in detail about the intimidation and threats he faced in Bangladesh from the Awami League government led by Hasina. In the book, which he self-published this year, he shares how he was forced to go on leave first and then resign at the Singapore airport en route Canada.

After staying with his daughter in Canada for a while, he sought political asylum in the US and shifted to his brother’s house in Paterson.

Sinha’s political persecution intensified in 2017, after he upheld a high court verdict that declared the 16th Amendment to the Constitution of Bangladesh “illegal”. The amendment, introduced in 2014, had granted the Parliament sweeping powers to remove Supreme Court judges for misbehaviour and incapacity. The high court verdict came in May 2016. In January 2017, the government challenged the verdict by filing an appeal with the appellate division, and in July a Supreme Court bench headed by Sinha unanimously rejected the appeal.

Sinha had allegedly been pressurised by Hasina to pass the order in her government’s favour. Recalling the meeting organised at Bangabhaban, the official residence of the President of Bangladesh, a day before the judgment, he tells The Telegraph, “On July 1, 2017, I got a call from a person who identified himself as the military secretary to the President. He requested me to attend a meeting with the President on the same day at 7.30 pm. When I reached there, I was stunned to see the Prime Minister, law minister Anisul Huque and attorney-general Mahbubey Alam, alongside President Abdul Hamid.”

Sinha told Hasina that the amended Article 116 — it allows the President control over postings and promotions of district magistrates and judges in the lower courts — had already led to political interference in the judiciary. He made the point that the Supreme Court should be spared. He also urged her to restore Article 116 to its original form, wherein the control of the lower judiciary rested with the Supreme Court.

Says Sinha, “But she told me Article 116 cannot be touched because her father changed it through the Fourth Amendment. And she requested me to give the verdict on the 16th Amendment in favour of her government.”

That, of course, did not happen. Sinha scrapped the 16th Amendment, but even that was not the only reason why Hasina was irked. It seems Sinha made a reference to the contribution of the “founding fathers” while delivering his 16th Amendment judgment. And this, Hasina considered unpardonable. Why? Because she apparently doesn’t encourage talk of the sacrifices of other leaders during the 1971 War (referred to in Bangladesh as the Liberation War), other than her own father, the first President of Bangladesh, Mujibur Rahman. Points out Sinha, “Mujibur Rahman is known as the Father of the Nation. But there are many founding fathers — Kamal Hossain, Barrister M. Amir-ul Islam…”

Sinha is not a great fan of Mujibur Rahman, who is commonly referred to as Bangabandu or Mujib. According to him, the seeds of autocracy in Bangladesh were sown by him in the form of the Fourth Amendment. He also tells me how Mujib, besides diluting Article 116, also altered Article 11. “In its original form, it stated that Bangladesh as a republic would ensure democratic values, freedom and dignity of human person, and elections at all state affairs. But the Fourth Amendment removed the election system from this guideline, thus abolishing democratic philosophy from the Constitution.”

Sinha believes Mujib, who served as both President and Prime Minister, was power hungry. “He never tried to strengthen democracy or minimise racial differences and establish peace in the country as stalwarts elsewhere in the world such as Mahatma Gandhi and Nelson Mandela did.”

In 1974, Mujib allowed only a select few national dailies to operate. Arrest warrants were issued against journalists of newspapers critical of him. Sinha says Hasina’s way of functioning is not entirely dissimilar to her father’s. He talks about how she too tries to control the press and enumerates the cases of enforced disappearances of journalists, arbitrary arrests and so on.

The most recent case is that of photographer and artist Shahidul Alam. Alam, who openly opposes Hasina’s autocratic ways, was arrested this August. He got bail only last month. Says Sinha, “Hasina is a megalomaniac. She doesn’t want anyone to criticise her. Her idea is, praise (me) or perish.”

Sinha enjoyed Hasina’s confidence so long as his judgments made her happy. For instance, his judgment on the assassination of Mujib. In 2015, she appointed him the first Chief Justice of the Supreme Court — in fact, he is the first Hindu to hold this post. But after the verdict on the 16th Amendment, the benefactor turned chief detractor. Sinha accuses Hasina of using military intelligence to harass him and finally forcing him to leave the country.

Many allege that Hasina is using the judiciary to settle scores with Khaleda Zia of the Bangladesh Nationalist Party (BNP). There are two graft cases against Zia. The BNP-led 20-party alliance has demanded their leader be released before the polls — she has been charged with corruption and has been in prison since February this year — but that hasn’t happened yet.

There are allegations that the Election Commission (EC) is also under Hasina’s control. Despite repeated appeals by opposition political parties to delay polls for another three months, the EC set the December 30 date. Many say this will be a farcical election just like the one in 2014. Sinha agrees: “Elections can never be free and fair in the current circumstances.”

During our conversation, Sinha often refers to constitutions of different countries, especially of the US, and famous judgments — to explain how a democracy should function. He also tells me how he wrote his autobiography after being inspired by the Glimpses of World History by Jawaharlal Nehru, My Life: Law and Other Things by M.C. Setalvad and The Idea of Justice by Amartya Sen.

Pirated copies of his self-published book are available in Bangladesh but nobody can sell his book openly there. The government has levelled against him 11 allegations related to money laundering and financial irregularities. “Corruption is the tool she [Hasina] is using to harass me,” Sinha says. He talks about the rampant corruption in the Bangladeshi government. And adds, “But anyone who questions her government is an anti-national.”

I tell him that we in India are familiar with such things, but Sinha says that Indian public offices are not as compromised as their Bangladeshi counterparts. “I feel Bangladesh is the mirror image of Pakistan. No matter how much Hasina hates Pakistan, she is actually turning Bangladesh into a Pakistan in every possible way — by stifling free speech, giving unnecessary powers to the army and making it a police state.”

According to him, the Prime Minister’s recent appeasement of the radical Islamist group, Hefajote Islam, is another indication of how Bangladesh is slowly transforming into a “fundamentalist” state like Pakistan.

Hasina loyalists, however, allege that it is Sinha who has strong links with Jamaat-e-Islami, the other radical group. “This is cooked up by Hasina’s sycophants to erode my image,” retorts Sinha.

We are far from done but it’s 1pm in Paterson, time for Sinha’s lunch — his favourite dish is shorshey ilish or hilsa cooked in mustard. Finding ilish in the US is not a problem, he tells me, what is elusive is the Bangaliana or Bengaliness typical to Dhaka and Calcutta.

Going back to Dhaka seems impossible for now, but Sinha wants to get political asylum in Calcutta. He had intimated the Indian ambassador to Bangladesh, Harsh V. Shringla, expressing his wish, but hasn’t heard from him yet.

Sinha says, “Calcutta is my dream city. I enjoy everything there — the shingara, the long walks on the grounds of the Victoria Memorial, shopping for books in College Street.” Then adds, “It’s a liberal space.”

Far away from home in the United States, the former Chief Justice of Bangladesh, Surendra Kumar Sinha, stays abreast of all news related to the home elections scheduled for December 30. He reads Bangla dailies online, meets Bangladeshis from the neighbourhood and holds political discussions fearlessly. In a tiny apartment in New Jersey’s Paterson, Sinha has found his lost freedom.

In October 2017, the 67-year-old was ousted by Prime Minister Sheikh Hasina Wajed for not toeing the government line. Over phone from Paterson, he says, “Here, I am able to speak freely. Nobody is recording my conversation with you.” Indeed, in the US, there is no Directorate General of Forces Intelligence, the military intelligence agency of Bangladesh, tapping phone calls or sniffing around one’s inbox.

In search of Brown Sahib's bungalow in Bangalore