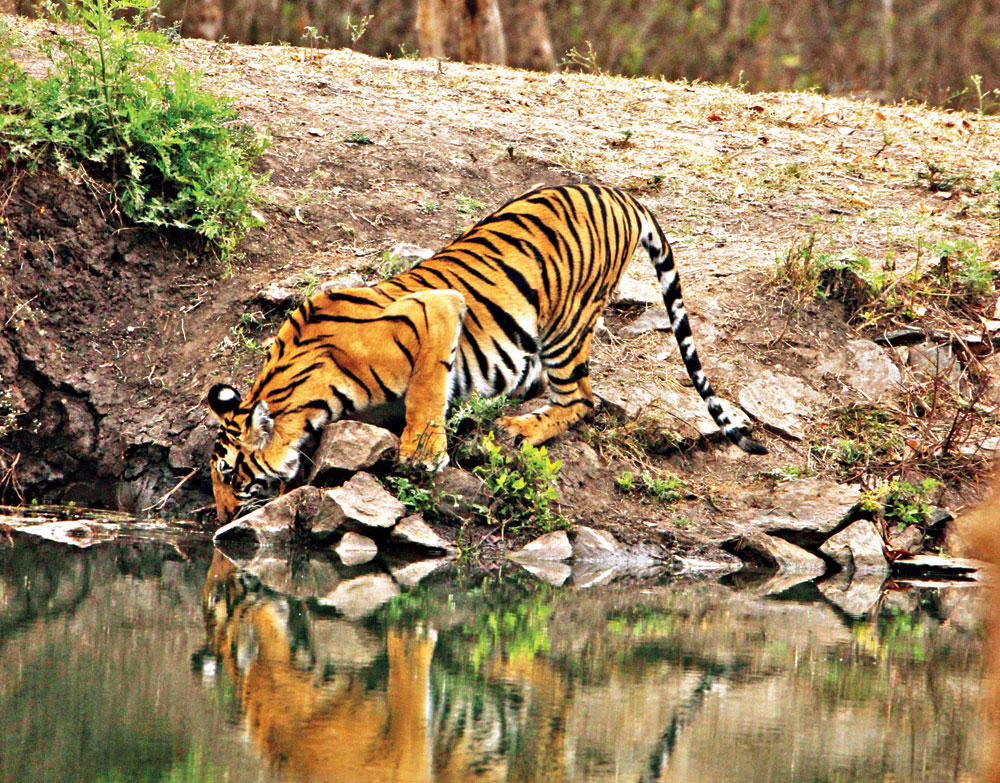 Imagine sitting by a large window at Glenary’s Bakery & Cafe, sipping hot coffee and soaking in the sun, enjoying the view of Darjeeling . Life could hardly get better on your birthday. Then suddenly an envelope is slid towards you. You open it in astonishment. Stare at the booking at Kabini River Lodge. Stuff that dreams are made of.

The quality of roads — stretching over 200km from Bangalore to the banks of Kabini — is admirable. You hardly notice the kilometres that whizz by. Typical village scenes magically transform into a thick forest by the river. The entry gate to the lodge is impressive and the British-era cottages are even better; it’s reminiscent of a time when the Wadiyars (the royal family of Mysore) and viceroys used them as private hunting lodges. Thankfully, guns have been replaced with cameras for shooting!

An old man and his pointing finger

After a sumptuous lunch at the Gol Ghar (at the lodge), we got ready for our first jeep safari. The excitement and anticipation was plain to see. Only Jungle Lodges & Resorts, which operates Kabini River Lodge, is allowed to conduct jeep safaris. So people pour in from adjoining resorts and clamber into allotted jeeps. I saw some of them with their eyes closed, praying.

I, for one, was praying that the safari allowed us to spot as many different types of birds and animals as possible. Each person had his or her wish list. Some had come for the famed black panther, others for a glimpse of the yellow-and-black stripes of the tiger while others hoped to see a leopard. I was hopeful. Let the jungle surprise us with as many as possible. While the other jeeps sped away, we had to wait for a couple who were to join us.

Ten minutes later, which seemed like an hour, we were joined by a sweet old couple from Bangalore. The wait, in fact, had its benefits. The noise and the dust had settled by the time we reached the entry gate to the jungle. Maybe the couple were going to prove lucky for us. Just as we entered the jungle, the old man tapped the driver on his shoulder asking him to stop. He then pointed to a tall tree. The Indian golden oriole — not rare but beautiful nevertheless.

Over the course of the safari we learnt a lot more from the old man, including that his eyesight was better than mine! Or was it just pure experience? While the light weaved its way between the thick branches, he kept spotting one bird after the other — a crested hawk-eagle, a common hoopoe, a white-cheeked barbet and even a large cuckooshrike. My kids had a great time clicking pictures.

On the way back, the old man tapped on the driver’s shoulder again. This time repeatedly; excitedly. He had spotted something other than a bird. At first all I could see were dead, dry brown leaves. I squinted. Concentrated. Ah yes, I saw them — a pair of mongoose. It was not just any mongoose… it was a stripe-necked mongoose. The pair was busy using their front paws to shovel into what looked like elephant dung; they were after dung beetles. Meanwhile, daylight reduced at a rapid pace while we drove back to the lodge.

Dinner at the Gol Ghar was exciting and frustrating at the same time. My kids — feeling proud — got to show their pictures to the others at the dining room. But then the experienced professionals started sharing what they had captured. While we were proud of the various bird pictures we had managed, they shared incredible pictures of tigers, some lazily staring into the camera and one with a spotted deer in its powerful jaws. The bar had been raised. Expectations fanned. We looked forward to the morning safari.

A crocodile slides noiselessly into the water

Action at the tiger tank

Waking up very early in the morning is tough. But a cup of hot filter coffee and a slice of walnut cake do help. While we were getting into the jeep, a screech caught our attention. Flying foxes. The fruit bats of Kabini noisily announced the break of day. The kids started their day click-happy.

The jungle was eerily silent. All of us in the jeep looked serene but we felt super excited. The jeep trudged along at a steady pace. The driver stopped all of a sudden, answered his call and animatedly announced: “Tiger tank. Tiger tank.” One felt as though you were part of the audition for the remake of Chitty Chitty Bang Bang. More of the bang this time with us being thrown around the jeep. Our driver suddenly raced towards what I presumed was the tiger tank . The good thing was that at least it had a tiger in it.

After what seemed worse than the Dubai desert safari, we quickly reached a place close to a large water body — the tiger tank. The place was crawling with jeeps loaded with enthusiastic nature lovers. Our experienced driver weaved his way between the numerous jeeps parked at awkward angles to get to the best viewing spot. Our guide scanned the other side of the waterbody with his powerful binoculars. His huge grin informed us that he had indeed spotted the tiger.

The painted stork is surprisingly fast

The next hour was a game of passing the binoculars as each wanted a close-up of the tiger. When one actually gets to see the tiger, the heart stops. It was massive. But thankfully dozing. The silence all around was interrupted by the click-click of cameras. The tiger remained unfazed and asleep. No movement, not even a twitch. Then in a nearby jeep a kid shouted: “Mummy, susu.” The gathering broke out in muted laughter. I couldn’t suppress a chuckle. And then we looked at the tiger across the tank. The kids voice had drifted across and had woken the beast. It sat up and looked at us. It stretched, got up and proceeded to nimbly walk down to the edge of the tank to have a drink. The click-clicks were amplified.

The impatient had their fill and proceeded to the other parts of the jungle. The experienced sat back and waited. A sambar walked past our jeep while my kids whispered: “Lucky deer. Look at the red gash on its throat. Must have escaped a predator.” Our guide was quick to point out that it was in fact a “sore spot”. A common occurrence during rut, apparently a gland near the throat exudes a fluid which combines with the less dense hair to give the appearance of a gash. Enlightened with this nugget of information we continued to train our eyes on the tiger.

While we waited patiently for the tiger to do something, our attention was diverted towards this little pied kingfisher which repeatedly dived into the water to emerge with a wriggling fish in its beak. Click. Got that. As we scanned the trees around the tank we noticed a pair of pigeons. But they were different from the ones we normally see in Calcutta. Our guide was quick to point out — the green imperial pigeon. Click. A small group of spotted deer nervously approached the edge of the water. Took a few quick sips and looked up. Click went the kids.

This time when we returned to Gol Ghar for lunch, I noticed my kids had a different swag to their walk. After all, they had photographed the tiger. And so much more. While trying to wash down the spicy south Indian curry with lassi, I noticed my daughter had not touched her food. She kept staring at the bamboo thicket nearby. In a flash, she was away with her camera. I followed suit, as did my son with his camera. And then my wife followed. There it was, the Indian paradise flycatcher with its long streamer-like tail. All the stories that I had told them about spotting this bird in Guptipara, my ancestral home, were true. The bird was truly magnificent. And it had got the attention of a female. Some more clicks.

We could have followed the bird the whole afternoon but we were informed that our boat safari would leave soon. While proceeding to the wobbly jetty, we managed to spot a common (not for us!) grey mongoose. Click. The boat was filled to capacity. With the cool breeze and a full stomach, I was soon lulled into sleep. Suddenly a woman shouted: “Snake.” I woke with a start to find the boat tilting precariously to one side as all her friends had huddled together on the side opposite the “snake”. It was a darter or the snake bird. Thankfully, they returned to their seats and the safari proceeded.

The boatman doubled as our guide. He expertly weaved his way through dead tree trunks that jutted out of the water. Apparently, the water level changes dramatically over the seasons. The trunks looked weird. The receding water also creates small islands and rich grassy meadows on the banks. We approached a small island and the women on the boat got noisy and animated. The boatman had enough. After switching off the engine, he approached them to announce that crocodiles were around and they were attracted to loud noise. Silence dawned.

One by one, the boatman reeled off bird names — black-headed ibis. Click. Yellow wagtail busily running around catching insects on the water edge. Click. Black-naped ibis. Click. The darter perfectly executing a “cervical strike”. The eighth and ninth vertebrae of the darter’s neck allows it to draw its S-shaped neck into a tight kink only to strike out at lightning speed. Poor fish don’t stand a chance. On one of the partly-submerged tree trunks a cormorant had built a nest. Click. A purple heron stood motionless; a master of patience. Click again. Noisy pratincole in the hundreds flew into the sky at the sight of the boat only to land a few metres away. Click.

The boat gained speed and approached the bank on the other side. The boatman asked us to maintain silence. Herds of elephants shared space with the spotted deer and mischievous monkeys. An osprey announced its displeasure through a series of high-pitched cries. Innumerable clicks.

We had lost track of time. The boatman announced it was time to head back. A spot-billed duck and its family posed for some last-moment photographs. A painted stork made a brief appearance. A woolly-necked stork stood by patiently waiting for a fish or frog. The setting sun painted magical memories for us. The once strangely out of place tree trunks now added to the magic. The moon appeared on the horizon. I, for one, was over the moon with this truly magical experience. What a lovely birthday gift!