February is the month to recall the fate of Olive Ridleys at Gokharkuda beach, Ganjam 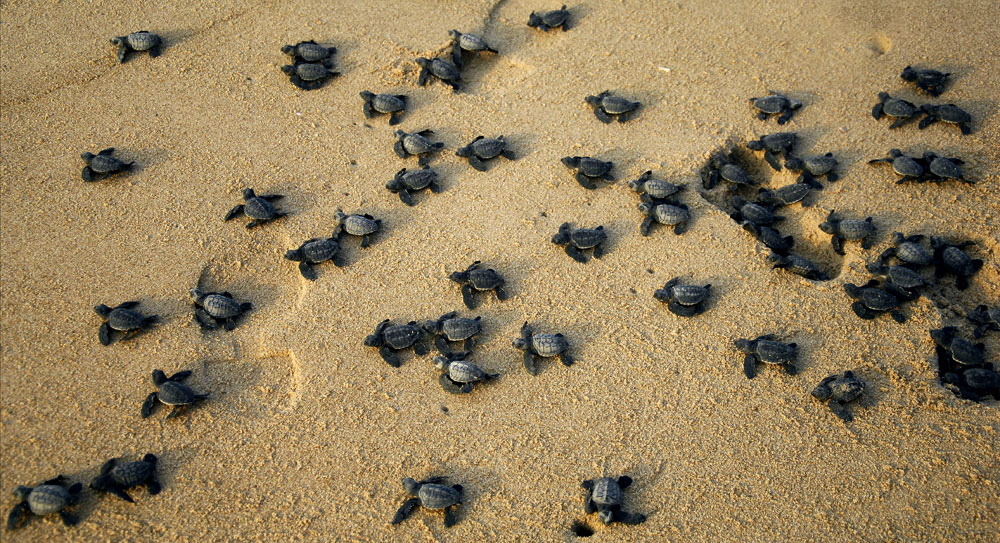 Did you know that the Kurma avatar — the second incarnation of Vishnu — has a nickname?

Neither did I. It was only after I visited Gokharkuda beach in Odisha’s Ganjam district that I learnt that the venerated turtle — did Vishnu not appear in the form of kurma? — has been christened, lovingly, as “Buro Kachhapa”.

Kurma’s christening had not been done by a priest though: it was an old fisherman — he seemed to have been around since the time Vishnu, in the guise of a turtle, held aloft a great mountain during the mythical churning of the ocean — who called Kurma Buro Kachhapa. And why not? Buro Kachhapa, an ancient creature, appeared magically each year at Gokharkuda to spend some time with the fisherman and his family in the month of February.

February happens to be the month of arribada: the mass nesting of some species of sea turtle that draws tourists to such sites as Gokharkuda, Rushikulya and the mouth of the Bahuda river. Thousands of female turtles apparently swim thousands of miles to reach these places. So I asked the fisherman, “How can you tell the Buro Kachhapa, aka Kurma, apart from the teeming turtles?”

The fisherman gave me a disdainful look. “Mu janichi (I just know).”

Dismissing such conviction could be, I learnt, a formidable task. That evening, as inky clouds gathered on the horizon and the darkening waves were illuminated, momentarily, by the lamps of boats venturing out to sea, the old fisherman whispered his forefathers had passed on to him secrets that helped him predict, among other things, storms and tides, the ebb and flow of the salty waters, that surrounded his life. It was this knowledge of the waters and the dangers that lurked beneath that, he added, had helped save Kurma’s life.

Does a god need help? Evidently.

Tales abound in and around Gokharkuda of some fishermen saving the life of a turtle that had been snared by a gillnet — one of the pitfalls of the mechanisation of fishing. A recent report stated that 600 carcasses of Olive Ridleys had been discovered over a period of two days in areas near the Gahirmatha marine sanctuary this year. Most of these deaths, the report said, took place after the turtles were hit by trawlers or got entangled in the nets. Fishing within 20 kilometres of the beach in Gahirmatha is prohibited by law. The forest department stated that it has arrested nearly 380 fishermen for fishing, quite literally, in these troubled waters for marine species. A large number of trawlers have also been seized for trespassing. Are such interventions effective as deterrents? If they are, how could 1.7 lakh cases of such slayings been accounted for in the last 17 years? Clearly, the plan to protect Kurma and his fellow journeymen suffers from some gaping holes, unlike the nets that are used to trap and slay the avatar.

But Kurma had survived: the good fishermen had freed him from the death trap. Thus, the ageing god returns every year, as a sign of his affection for benefactors mightier than him.

Meanwhile, as we sat talking in the gathering dusk, another act of benefaction was unfolding at some distance. A group of tourists — their shrill voices rose above the wind from the sea — had arrived in two noisy buses to get a glimpse of the Olive Ridleys. The hearts of city folks turn into gold during trips to India’s hinterland. That is perhaps why they decided to organise impromptu competitions such as sit-and-draw and musical chairs for the children of the local fishermen.

It was a bitterly unequal ritual. Some plastic chairs had been placed in a circle; a broken tape recorder was blaring Odia songs; a group of bedraggled children were being egged on by nattily dressed, rotund visitors to grab a chair before the music stopped. There were prizes to be won — school bags and other articles of daily use were up for grabs. A slip of a girl exited the competition after one of the early rounds and stood alone in a corner. Her father appeared a bit later and led his daughter away, screaming at her for failing to bring home the precious gifts that were out of her reach. The donors were looking elsewhere. Towards the turtles perhaps.

Watching the tiny sobbing figure recede into the lengthening shadows, I wondered whether Buro Kachhapa had been watching the child’s humiliation as well. Did her powerlessness remind the turtle god of his own powerlessness to free others from poverty — another equally dreadful net?