Meghalaya is the perfect place for a relaxing vacation

‘Long roads, endless mountains on either side, waterbodies and lakes as still as they can be... the drive to our guest house in Cherrapunji was blissful’ 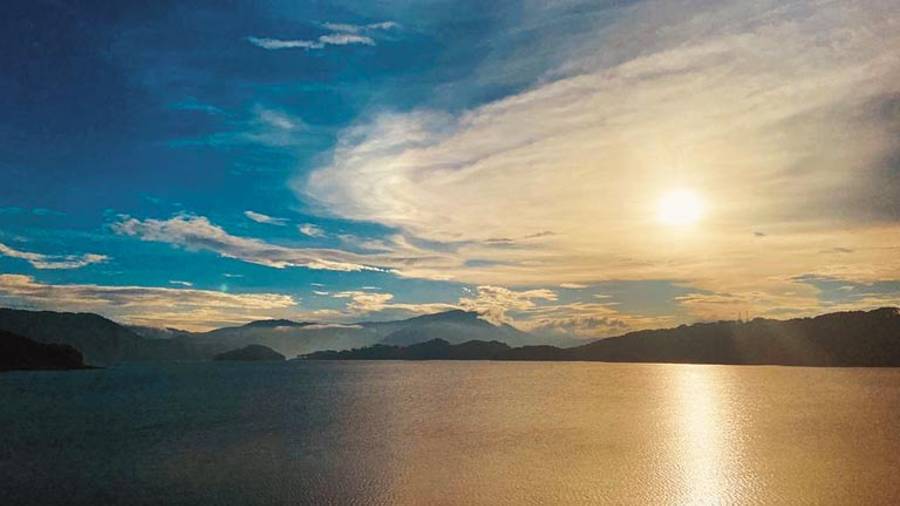 For someone who enjoys the Pujas from behind the Ekdalia Evergreen Club pandal, taking a trip during the festival was an impromptu decision. With ticket prices going through the roof I woke up on Saptami morning to catch my train to Meghalaya… not a direct train of course. The 21-hour journey went through beautiful meadows before I reached Guwahati at 5am. When I reached, it was still dark and making the drive from Guwahati to Cherrapunji was even more beautiful.

Long roads, endless mountains on either side, waterbodies and lakes as still as they can be... the drive to our guest house in Cherrapunji was blissful. On the way, I crossed small villages with huts, small eating places and you could just tell the air was fresh. After a three- hour-drive we reached the guest house all the way in Sohra. Being a basic place to stay, its star attraction was the stream that went across in front of my room. Shallow with blunt rocks, you would find kids and dogs coming to play with the little fish in the stream. I too made my way down to it to get a free pedicure done, till a wasp shooed me away, of course. On the first day I decided to enjoy the stream, eat some snacks and clock in.

New day, new itinerary! After some breakfast I wanted to do a little sightseeing but also try the local cuisine. By merging the two I was set to go to Nohkalikai Falls and Shillong for some food. After driving up a mountain we reached the falls but could only see it from a distance. The water was as blue as it could be and the waterfall was in the middle of a valley of mountains. Being the tallest plunge waterfall in India, to reach the place one would need to make a trek of 3,000 steps, which appeared doable had the sun not been at its hottest that day. But the serene beauty of the place came with a rather depressing story. ‘Noh Ka Likai’, in local Khasi tribe’s language means ‘the leap of Likai’. The legend goes, Ka Likai was a widow who wanted to provide her daughter the love of a father. For this reason she remarried but on the contrary the new husband detested the daughter. One day, Likai had gone to work and taking advantage of the situation her husband murdered and cooked up a meal with the daughter and even fed it to Likai. On finding out, Likai, filled with sadness, took her life by jumping off the cliff.

After having a bowl of mixed fruit and buying myself a bow and arrow made with tree bark, I was on my way to Shillong. Out of all the dishes I wanted to try, the first one had to be momos. Our driver took me to a hole-in-the-wall eating place on the second floor of a dilapidated building. The place only served beef momo, beef laphing and beef thukpa and I could not have asked for more. The momos were fresh, hot and steamy with big portions of beef inside it.

This was my first time trying laphing, which was a cold mung bean noodles dish that is spicy and served with soya sauce and other sauces. I popped that slippery-textured treat like tic-tacs and you could say I was “laughing” after filling my tummy with laphing!

The sun was setting after such a late lunch, but that didn’t mean that I wanted to go back to my guest house. I made my way to Newton’s Park and after eating some yummy cream buns from the vendors outside, I decided to take a boat out for a paddle. It was then when I learnt that my hand-eye coordination probably needed some practice. I didn’t mean to wake up a family of ducks because of steering and speeding. Sorry duckies!

This new day was now only dedicated to sight-seeing. I got a change of clothes because I was making my way to Wei Sawdong Falls. While we were on the mountain top the waterfall turned into a lake with water streaming down through nooks and crannies. The clear cold water was making its way down the mountain and after driving down the hill and a mini trek later we reached where the main waterfall was.

Blue, cold and clean, it would be a shame if anyone were to litter. I jumped into the cold water. With shivers down my spine I did a few laps in the circular waterhole with the water falling over my head as well. On stepping out I felt like a block of ice. Brrr! But the cold didn’t last long, for the trek up ahead warmed me up a little. All is great!

That was a good swim but hunger pangs started to kick in. I asked the driver to take me somewhere “local” and he understood the assignment. Not far from the guest house was a local restaurant that served their version of Asian cuisine. Thukpa, pork momos, chilli chicken, pork rice, curries and so much more. Big plates at pocket friendly prices. No Jadoh though! Well maybe next time. After being introduced to the restaurant in Sohra I probably had two more meals there. Oily, yes but so tasty!

After a happy meal I wanted to check out the caves. En route Mawsmai Cave. The tour was a short one and quite convenient for people, like me. I first took a walk through the forest and the cave mouth was right there. Little bulbs kept the cave illuminated but it was still a little dark. Inside the cave you could feel fresh water dripping from inside the mountains and the different layers of the cave looked beautiful. There were some tight spots that I had to kneel or crawl through but that effort made the tour even more fun. It was probably more exciting because there was no sunlight giving it a mysterious vibe.

On coming out and munching on some more momos (yes, I had a lot of them) I made my way back to the guest house, readying myself for the new and last day.

The mountains and falls were kind to me but on the last day I wanted to relax and not tire myself out with activities. I left my guest house in Cherrapunji and made my way to Guwahati, which took about five hours by car. I was making my way to the city as it would be convenient for me to reach the airport the next day. On reaching in the evening and checking into a hotel I was made aware about a live gig in Urban Mantra on Zoo Road. A local band named Hiraeth Trio were performing an acoustic set at the pub and yes I wanted to go. The night scene in Guwahati is still restricted by Covid protocols and the acoustic night wrapped up by 10pm.

On entering I was greeted by my friend Abhilasha Bharali who took care of me like an elder sister. She introduced me to Karpum Pegu, the menu curator of the venue who fed me delicious wings, pork and fish- based dishes. So delicious was the cuisine that I asked her to help me out with a lunch the next day before I made it for my flight and she directed me to Rice Tales and even prepared an exclusive thali for me.

What a way to say goodbye! Karpum Pegu had arranged a veg thali, Pork with Lai and Aak, Pork with Bamboo Shoot and chicken cooked in rice flour. Where do I start from?

Each of the preparations was cooked in Naga style and had an authentic taste. The chicken was in a thick gravy and juicy while the pork dishes were lighter but had the lemon-grass-y Oriental touch.

I was glad to leave Meghalaya on such a happy note. Being lost in the mountains unnerved me and the swim in the waterfalls was blissful. Meghalaya is definitely a place where you can get rid of your worries, even just for four days.

The Wei sawdong Falls is a two-tier waterfall

The interior of Mawsmai Caves

The stream outside the guest house

Beef momos and laphing from Shillong

The thali from Rice Tales