Enjoy Goa at its sultry, sexy best during monsoon over Bebinca and more

The Portuguese came to India well before the British or even the Mughals and left Goa in 1961, after 450 years of rule. They had a remarkable influence on this territory of 3,700sq km and what has emerged is a lifestyle and cuisine quite distinct from other parts of the country. Goan home-style cuisine is a curious blend of Indianised Portuguese flavours; of subtlety and spice. Portuguese specialties like rissois — little half-moon pasties — and caldeirada — an onion fish stew — are enjoyed as much as the pungent Goan sausage, a spicy sister of the Spanish and Portuguese chorizo.

Seafood is a staple for most Goans. Fish and prawns are even sun-dried earlier in the year to make sure that the Goan lust for seafood is satisfied during the monsoon, when the glamorous big catches are not available. Goans eat any kind of fish, from the fancy lobster, jumbo prawn and pomfret, to the modest clam, mackerel, small mud crab and mussel. Fish is frequently coated in a red masala and fried in a dusting of fine semolina; stuffed with a red spice paste known as reichado; or dunked into velvety smooth coconut curries. The monsoon brings in a whole new selection of fish caught in river estuaries as they swim upstream or raised in salt pans which the locals swear are more flavourful than sea fish. 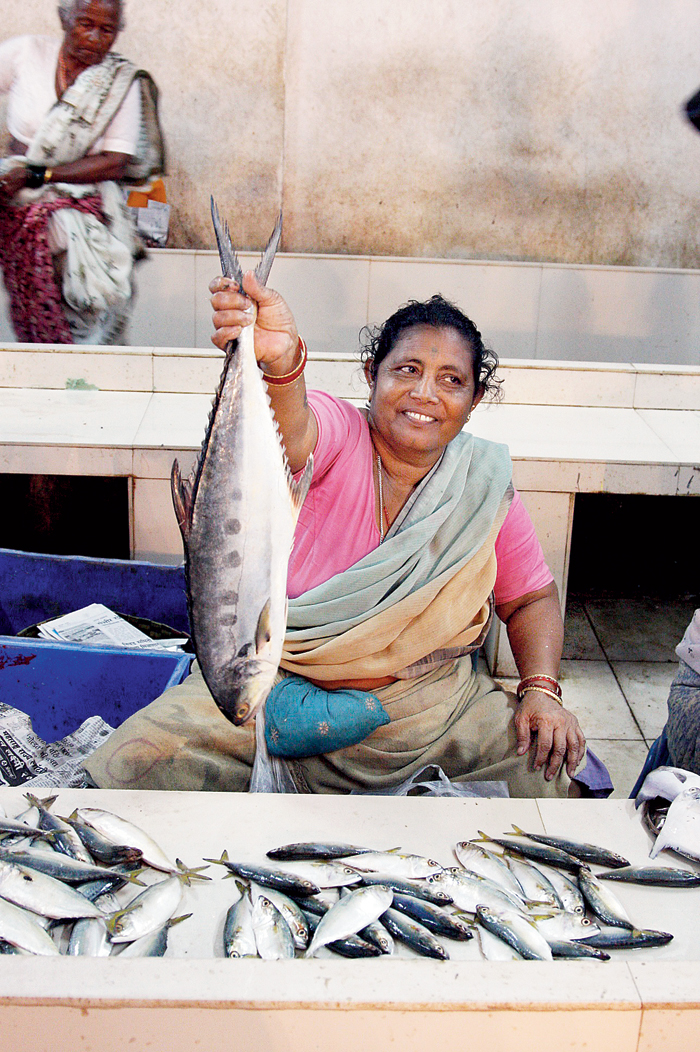 “No Goan, no matter how many years or distant as an expatriate, is wholly uninformed of the meaning of monsoon. It is as much a social event as a grand climatic tour de force and begins, quite properly, early in April. In the towns and villages of the interior, the heat and the humidity descends in shimmering haze, temperature and humidity soar, and the great exodus to the beaches begins. Here, the balmy pre-monsoon breezes blow in from the sea all day and night, cooled by the moisture heavy in the air. Swimming as the tide comes in — and only as the tide comes in is as invigorating as a whirlpool bath. Seafood is never better. The precipitation far out in the Indian Ocean increases the content of salt in the water and the fish are fatter and tastier for it…. Pineapple and jackfruit appear in the market place and in May, the peerless Mankurad mango is ripe on the branch. The garafaos of feni, laid down six months earlier are guaranteed to keep the chill from the bones and the blues away in the long, lean, rainy months.”

Much is said about north Goa. The restaurants there win top awards (Bomra’s, Gunpowder, Thalassa, Black Sheep Bistro) and are packed in season and their chef owners are nothing short of stars... other successful brands like Olive and more recently Ritu Dalmia’s Diva, see north Goa as a perfect opportunity to expand their empire. After all, those who are eating in their restaurants in other cities would probably like a familiar taste when they’re on holiday too. So north Goa has become all about not only catering to the tourist but to the many new residents from Mumbai and Delhi who now either live there or have second homes there. All the smart restaurants serve international cuisines... you would rarely find a smart Goan restaurant in this neck of the woods serving local food. You have Florentines, Kamlabai, Lloyds and so on but they are modest eateries and not places to wine and dine with the girlfriend.

I have recently rediscovered south Goa. I used to consider life south of Panjim (SOP) a bit remote and lacking the lustre and glamour of the north. It has now perked up and reminds me a lot of what Calangute and Arpora used to be like 30 years ago… just sleepy little villages. The beaches in any case were always by and large much better than the north except for maybe Morjim and Ashwem, which have a rustic, salt of-the-earth charm.

In season the shacks on Palolem, Colva, Agonda and Benaulim come into their own, all serving excellent shack food... much of it with a local flavour. If you’re looking for something a bit smarter there’s the predictability of Martins and fresh catch at Fisherman’s Wharf. For a touch of real local flavour, we discovered Assolna, a little village in Cuncolim not far from Cavelossim, with a row of remarkably good seafood restaurants on the Sal river all full on a Sunday afternoon — Sam, Seaman’s and Starlight are the best. Any local will tell you so, including our taxi driver.

Margao has morphed into a nice town, which serves as a good central spot to shop for the basics and you’ll find interesting shops and things to do on the approach roads to all the main beaches — Majorda, Mobor, Cavelossim, Varca, Benaulim. And where to stay? Well the south has its share of swanky luxury resorts — Leela, Lalit, ITC Grand, Taj Exotica. We discovered Dona Sylvia recently taken over by Novotel. It’s a down-to-earth resort of individual little houses and rooms on 28 acres. The best part is that it is on one of the most beautiful white sand beaches in Goa, Cavelossim. 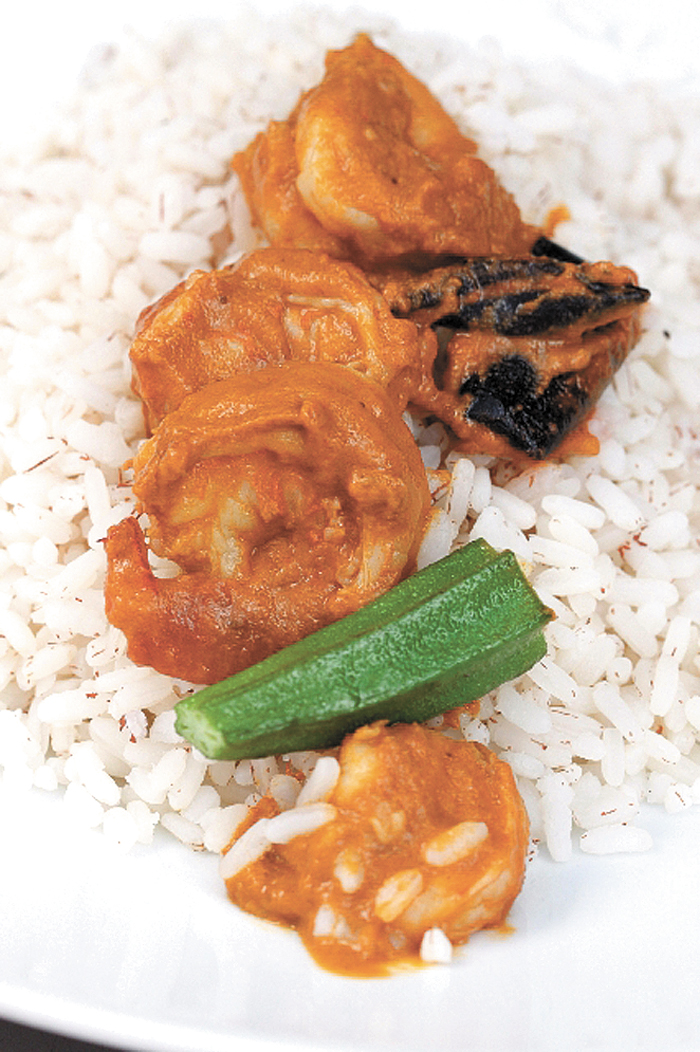 Dona Sylvia is the kind of place you can spend a considerable amount of time in. It’s not super luxurious but it is very comfortable and reasonably priced, which really means you can afford to spend several days here. Apart from the beach, there is a Spa run by Sohum with an excellent in-house Ayurvedic doctor who looks after the spa and also takes one-on-one yoga classes. They have some good restaurants and a bar as well as room service that can also be set up on your verandah. You can enjoy dinner as we did one evening listening to the sound of the waves overlooking the sea. They also serve lunch or dinner on the terrace of a house with your own chef and butler. Cuisines range from exceedingly good traditional Goan to Chinese, Indian kebabs and steak served on hot stone and seafood at the poolside restaurant Mama Mia. It was their traditional food which really wowed me… the prawn curry and red rice, Mutton Xacuti and Bebinca made in-house. 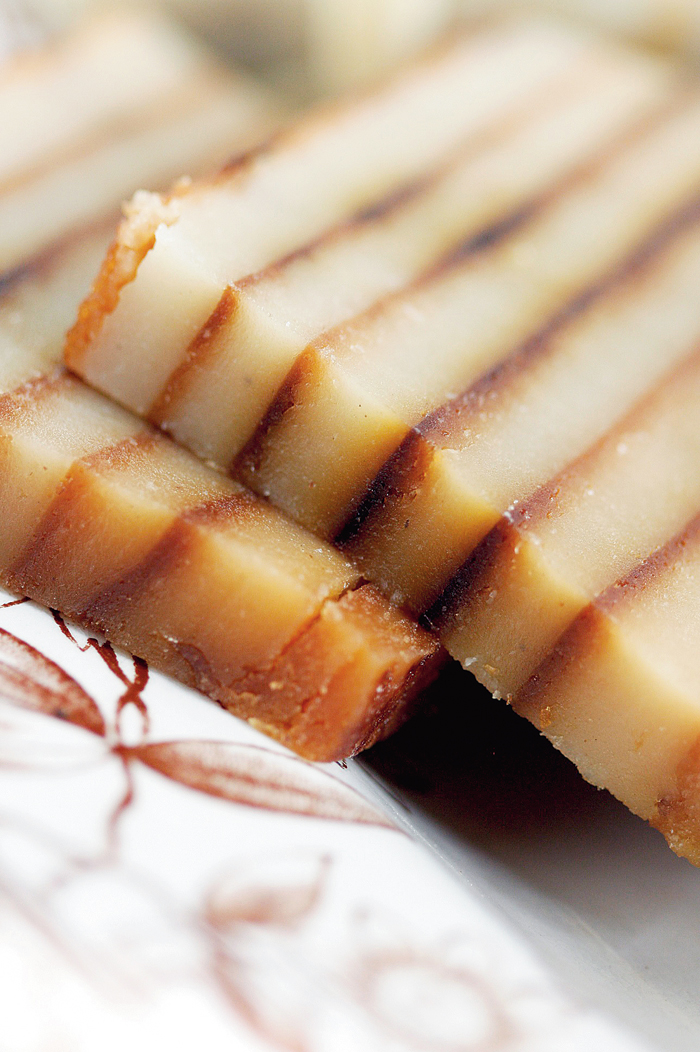 If you haven’t tried Bebinca, a layered Goan pudding, you must. Made from coconut milk, sugar, egg yolks and flour, interspersed with clarified butter, the more layers it has, the more accomplished the desert maker is considered. The dish of the trip for me was the most divine beef tongue in green masala spiked with toddy vinegar. It’s a really home-style dish which I requested their sweet Goan chef to make off the menu and he did... brilliantly!

Forget Goa over Christmas. It is overpriced and underwhelming. If you really want to see Goa at its sultry, sexy best, then opt for a quiet vacation in the monsoon.