Baby alligators and fishing for piranhas in the Amazons

With the Amazon forests tragically afire, the writer remembers an adventurous trip he took to the forests in 2014 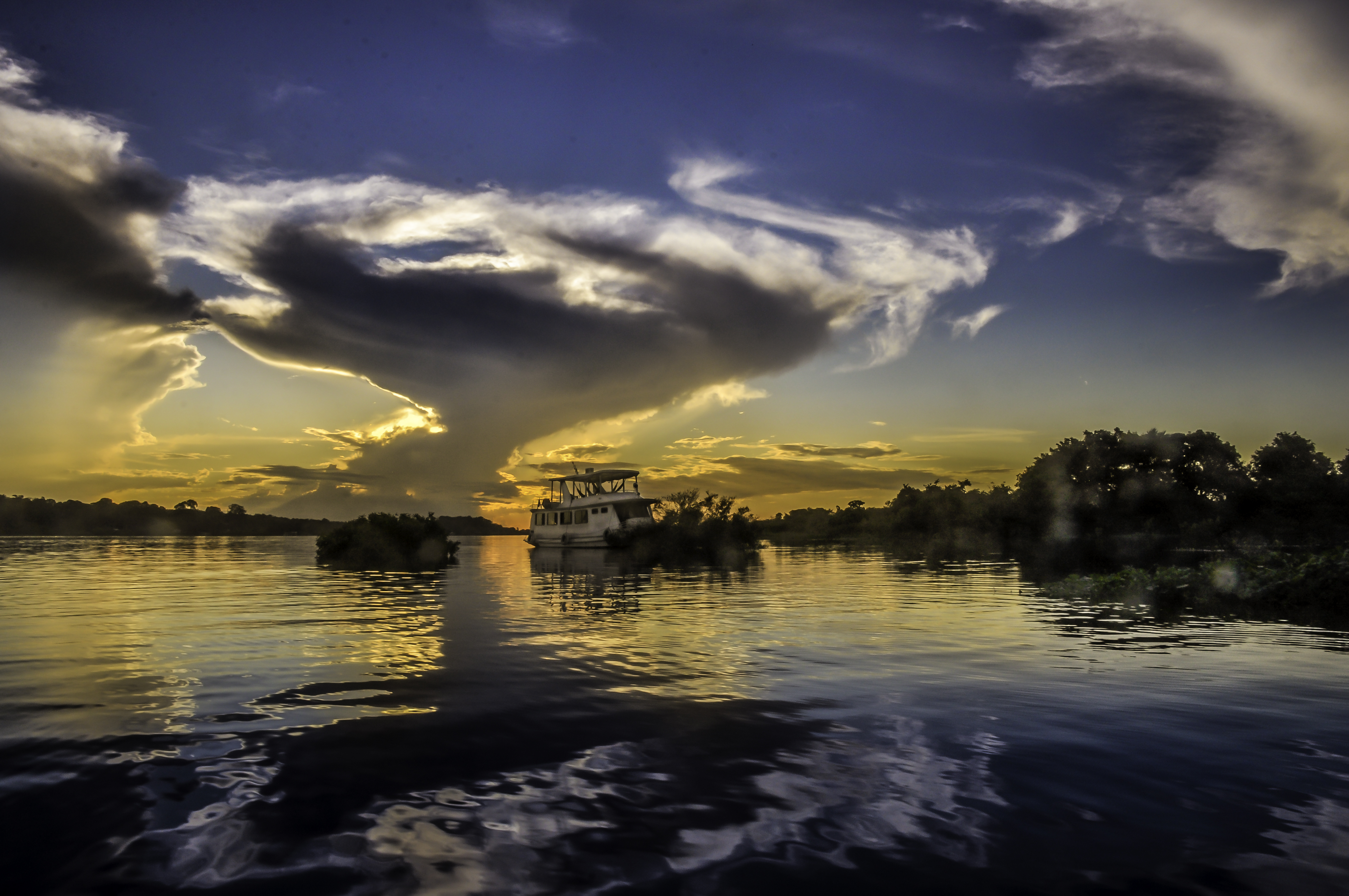 Heat. That’s first thing that hits you the moment you land in the Brazilian city of Manaus in the heart of the Amazon rainforest. That was how it was in July of 2014 under the socialist President Dilma Rousseff and that’s the way it is now under Right-winger Jair Bolsonaro. And now, with the Amazon forests tragically afire, it is safe to say that the heat is always on in the Amazon.

Five years ago, Brazil was smarting from the 1-7 humiliation in the football World Cup semi-final by Germany when we landed in Manaus. We, as in a friend and his wife. As the car took us to the swanky hotel in Manaus, we zoomed past the illuminated Arena de Amazonia built out of nowhere just for the 2014 World Cup.

The next day I met David Beckham at Manaus port. Not the footballer, but a big fat cat named after him. Its owner ran a liquor shop. As we deliberated how many crates of beer and bottles of cachaca — a drink Garrincha (the footballer) was in love with — we should take along for the cruise, Beckham yawned and jumped onto my lap. I hate cats; I nearly passed out.

The confluence of the Rio Negro river and Amazon made for a wondrous sight. As we cruised along, the colours changed and our mood too. The Rio Negro is the largest remaining tributary of the Amazon, the largest blackwater river in the world, and one of the world’s 10 largest rivers. The cable-stayed Rio Negro Bridge that connects Manaus with Iranduba (also in the Amazonas) reminded me of the second Hooghly bridge. 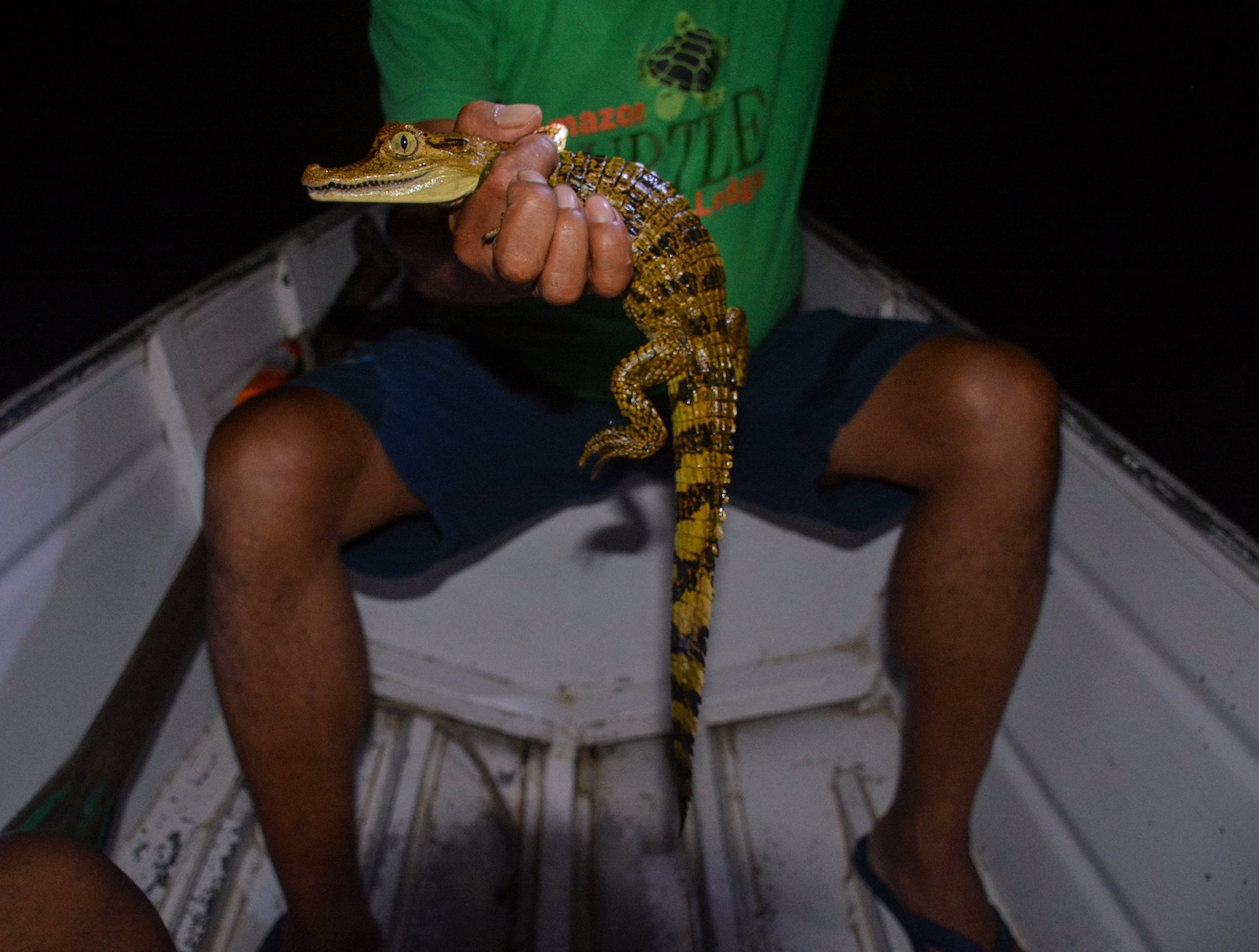 Posing with a baby caiman, a kind of alligator
Angshuman Roy

That night after drinking copious amounts of caipirinha, Brazil’s national cocktail, we scrambled into a boat in a determined bid to sight caimans, a kind of alligator. At some point in the pitch dark, our guide Enrique lunged forward and caught hold of a baby caiman. He asked me to hold it, but I was too scared. My courageous friends, however, had no issue with holding it or posing with it.

Amazon is Amazon. That night, long after I had fallen asleep after some more caipirinhas and a sumptuous dinner of feijoada — a stew of beans and pork — I woke up to a clatter. I peeped out of the window and saw five or six dolphins playing. But the next morning at breakfast when I told the others about it, I was met with scepticism. “Are you sure?” was all that Enrique had to say in a funny tone. I was not a little offended and would have remained so, had it not been for Enrique’s follow-up act — he took us to see a pet anaconda.

Soon after this we realised that our stock of cachaca was running out. This was worrying. But once again Enrique redeemed himself and more. The Peruvian made a 45-minute detour and took us to a bootlegger inside the jungle. The bootlegger, however, refused to sell unless we had heard him play some hip-hop Latino music. 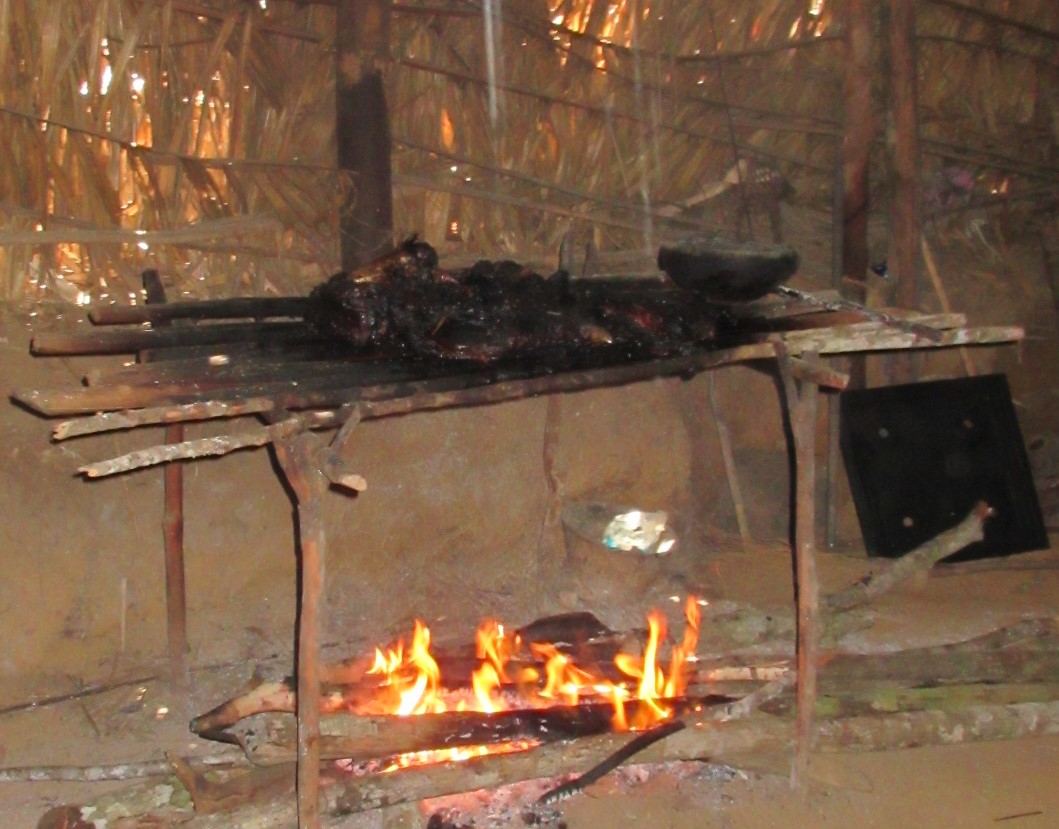 A jaguar being barbecued
Angshuman Roy

That day we went to an Indian village, where the leader of the pack welcomed us with open arms. The moment we entered the hut, we smelt something cooking. It turned out to be a jaguar that was being barbequed. We learnt from Enrique that it had trespassed into the village and feasted on cattle. Hence the barbecue.

The amazing part of the jungle was that even in the interiors, there was electricity. This was started when Lula da Silva was the president and under his protégé, Rousseff, it continued. In Rio and Sao Paulo, there was a lot criticism of Rousseff, but the Amazon told a different tale. The social reforms were there on the ground, visible to all.

We trekked for 13 kilometres inside the jungle and that nearly broke our backs. But we got to see different types of trees and birds like the king vulture, the Amazon kingfisher and the caracara, which is a kind of falcon. There was a tarantula that I almost stepped on, much to my horror.

During the night stay in the jungle, as we struggled to fix the hammocks, Enrique and the cook brought in a baby cobra. It rattled me all right. That night I barely slept, jumping out of my skin at every thud and swoosh. There was this bird which is known to call after every hour, but it too called it a day after two in the morning. At some point, I even called out for Enrique. Thereafter, I simply waited for dawn to break. And as giant leaves fell on the ground with a thud, I cursed myself for agreeing to come.

It was not that everything I set out to do on that trip was a success. For instance, we went piranha fishing but never managed to catch one. Yet, the trip left me fulfilled and it was worth every penny of the personal loan I took. Of course, that I am still paying those EMIs is another Amazonian story.

Brazil to reject millions in aid