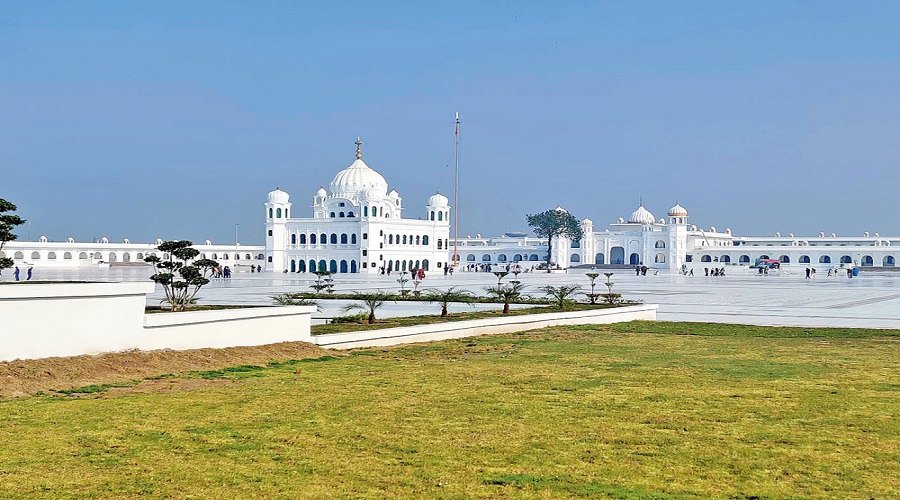 On the occasion of the 550th birth anniversary of Guru Nanak in 2019, a stretch of road connecting Dera Baba Nanak in Punjab, India, and the Gurdwara Darbar Sahib in the village of Kartarpur in Pakistan 9km away, was opened to pilgrims. While it is officially called the Shri Kartarpur Sahib Corridor, some people are calling it the Passage of Hope and Peace. And the opening of this corridor has brought the village of Kartarpur into the limelight.

We were lucky and blessed to be able to undertake this trip in our lifetime. Registration for pilgrims along this visa-free corridor is with an Electronic Travel Authority document known as ETAonline. As advised by foreign ministry circulars, we carried our passports and other identification documents and boarded the Indigo flight from Calcutta to Amritsar with the Sikh jaikara: Jo Bole So Nihaal Sat Sri Akal. Our ETA approvals had come three days before.

There was a sense of elation and anticipation that we would get connected to the lost roots of our ancestors. The ardaas (prayer) had finally been answered.

On the day of the journey from Dera Baba Nanak, we were given a bus by the Shiromani Gurdwara Parbhandhak Committee (SGPC) chief secretary Roop Singh, who also facilitated our smooth travel and other necessary arrangements.

Along with my wife Gurbir Kaur Ahluwalia and nephew Dashmeshbir Singh Sodhi and a jatha of 40 pilgrims singing the hymns of Guru Nanak, we proceeded towards Gurdwara Darbar Sahib, also known as Kartarpur Sahib, in Pakistan along the newly inaugurated Shri Kartarpur Sahib Corridor.

This is something that every Sikh has been praying for for the last 72 years: “Jin gurdware gurdham jinha ton panth nu vicchodia gaya hai usde khule darshan didar (the gurdwaras which have been separated from the country, allow us to visit them freely).” And sharp at 9am we reached the integrated checkpost (ICP) built by Land Port Authority of India at Dera Baba Nanak.

The entry gate of the ICP greets you with the beautiful golden symbol of Ik Onkar on a high pedestal. After bowing our head to the insignia used by Guru Nanak to represent God and his creation, we were ushered into the reception hall by the security staff after checking our ETAs.

There was great enthusiasm among the pilgrims and a mood of elation in the reception hall. The atmosphere was one of bonhomie and goodwill. For the pilgrims, it was a moment of high sentiment and emotion as they were about to make the special journey of their life, which few had been blessed to take to the resting place of the founder of Sikhism, Guru Nanak.

After the immigration process we were issued temporary passes which were to be shown along with our ETAs at every checkpoint till we reached the border checkpost. Just before our exit from the Integrated Check Post (ICP), the Punjab health department was immunising all pilgrims visiting Kartarpur to pay obeisance at Gurdwara Darbar Sahib with polio vaccination.

At 10.30am we crossed the no-man’s land between the Indian and Pakistani borders and finally entered Pakistan. We were welcomed with broad smiles and “Sat Sri Akal tuhada swagat hai” on the other side. Pakistani golf carts were waiting for us with beaming drivers who took us to the checkpost and, within a few minutes, the entry fees of $20 per head was paid. Our passports were not stamped, instead we were issued entry permits to be deposited on our return from Kartarpur Sahib.

There were some 70 immigration counters waiting for the pilgrims with courteousness. Outside the checkpost, a fleet of new buses was waiting to transport us to the gurdwara. The women in the group started reciting “Satnam Waheguru” in melodious voices and we were transported to the celestial realm of Gurbani in an instant.

On the way to Darbar Sahib, we crossed the river Ravi meandering between the Indian and Pakistani borders. It was this river’s deluge a few years after Guru Nanak left his mortal self that destroyed the Kartarpur Sahib dharamstal and both sons of Guru Nanak moved to the other side of the river Ravi and built Dera Baba Nanak 5km away. Maharaja Bhupinder Singh of the erstwhile Patiala state rebuilt the present structure of Kartarpur Sahib in the 1920s.

However, the importance of Kartarpur as the last resting place of Guru Nanak, and where he preached and practised his mission of Sikhi “kirat karo, vand chhako and naam japo” (work hard for a livelihood, keep remembering God and share your bounties with the world) remained intact in the hearts and minds of his followers.

Finally, as we reached our destination, we were warmly welcomed by the Punjab Tourist Police of Pakistan who checked our entry slips and gave a crisp and courteous briefing about the area and facilities and said that they were here to serve us with folded hands. We then proceeded to enter the Gurdwara Darbar Sahib through the Darshani Deori with prayers on our lips and tears of joy flowing in shukrana (gratitude).

We touched the soil on our foreheads in sacred memory of Guru Nanak, who spent 18 years of his life in Kartarpur. I tried to catch the panorama of the newly constructed Darbar Sahib building from the Darshani Deori.

The huge structure, the head granthi of Kartarpur Sahib explained to us, used to be on a piece of land of four acres. On the occasion of the 550th birth anniversary of Guru Nanak, the Pakistan government allotted another 100 acres to the gurdwara. Hence it now stands on 104 acres land. There was also other Sikh pilgrims from the US, Canada and the UK who had already arrived there either directly or via the Wagah border. 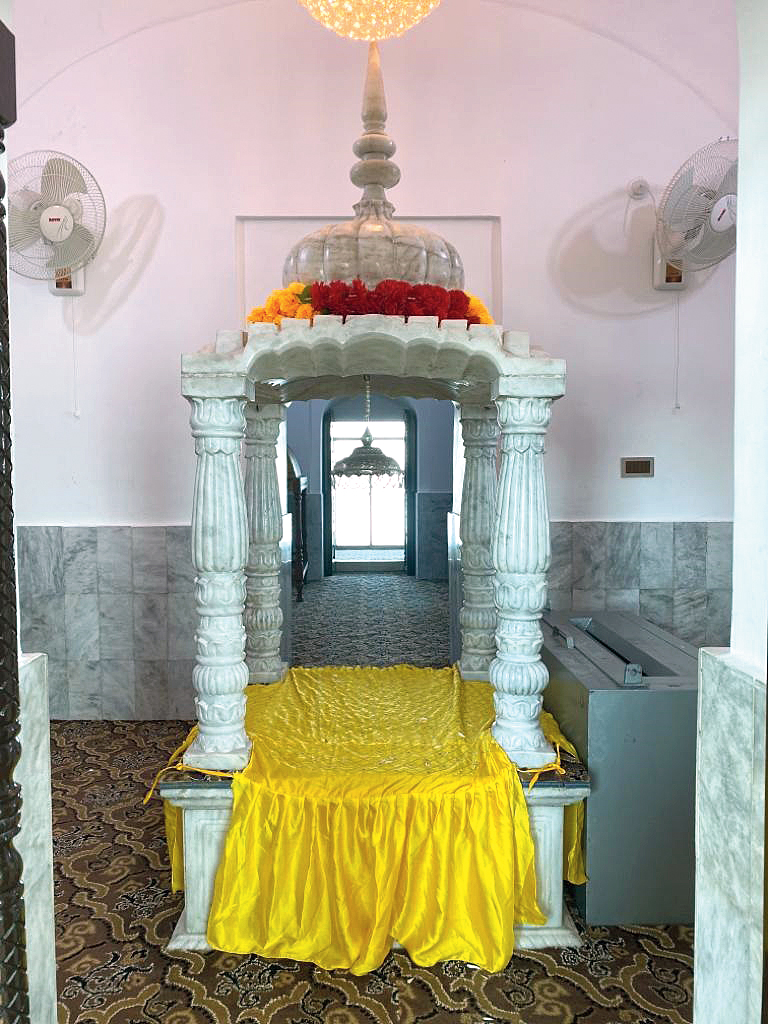 Angithi Sahib
Picture by the author

I made a parikarma (circumambulation) of Darbar Sahib and found the mazar where Muslim followers of Guru Nanak buried his remains outside as well as a samadh, Angithi Sahab, where his Hindu followers cremated his remains, inside the gurdwara building. On the first floor, as we went up the stairs to pay obeisance to Sri Guru Granth Sahib, was the golden palki donated by the Sikh community of India.

Kirtan by a Raagi Jatha from India and New Zealand was going on. Some people moved to the top floor balcony to get a glimpse of the surroundings and a panaromic view of the place.

I decided to make a round of the Kartarpur Sahib complex. First, I visited the congregation (diwan) hall, then moved on to residential area created for pilgrims (serais) where finishing touches were being given, and, finally, the langar (free kitchen). I was served rice palao with dal by smiling workers who had been hired to serve and cook langar for all.

At 4pm, we started moving towards the exit gate. I had a last glimpse of Gurdwara Darbar Sahib and took some pictures. At the exit, we boarded the bus for our return journey. Passing through the Pakistani checkpost, we reached the final gate manned by tall Pathans. My ardaas was that the Kartarpur Corridor creates an atmosphere of goodwill and brotherhood between India and Pakistan so that visiting other gurdwaras in Pakistan also becomes visa-free. 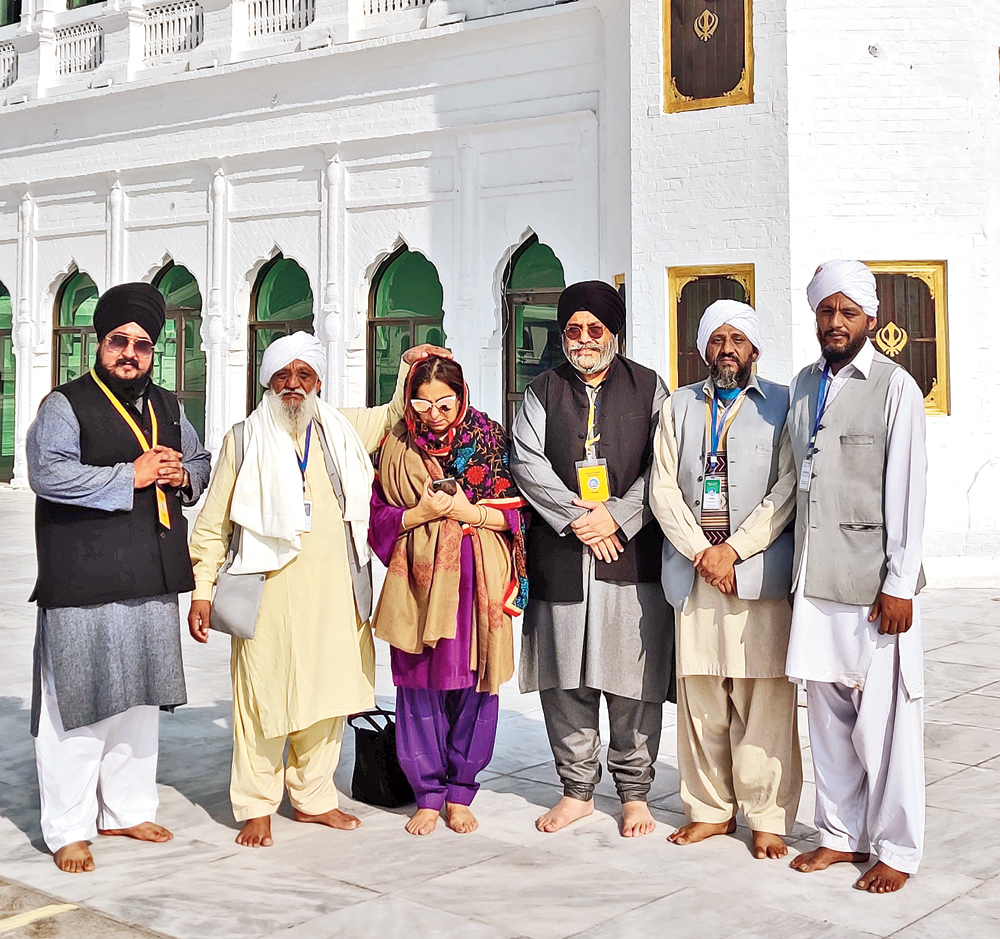 In Kartarpur Sahib, every step reminded us of Guru Nanak’s life and the way he used to live here. During our visit we were fortunate enough to meet Naeem Tahir Lal, son of Bhai Lal, who is the 18th generation descendant of Bhai Mardana, the first Sikh and long-time companion of Guru Nanak.

There is also a 20-feet well, made of small red bricks, which is 500 years old and is believed to have been built during the lifetime of Guru Nanak. It is from here that he used to water his fields that are now known as Kheti Sahib.

The happiness of the Pakistanis upon seeing the visiting Sikhs speaks of a nostalgia about a past that can only be imagined. It was as if we were returning home. The request for photographs was endless.

The hosts were most enthusiastic in their expression of Punjabi brotherhood and reminisced about the fact that their Punjab is the same as our Punjab, that their soil is the same as ours. Excited smiles crept upon the faces of onlookers at the sight of turbans and the sound of Punjabi being spoken: “Tuhaadi pagan tuhadian shaan hai (your turban is your pride).”

The author is the chairman of IHA Foundation and general secretary of Gurdwara Behala, Calcutta. He can be reached at satnam.kolkata@gmail.com