A look at Simlipal National Park and its creatures 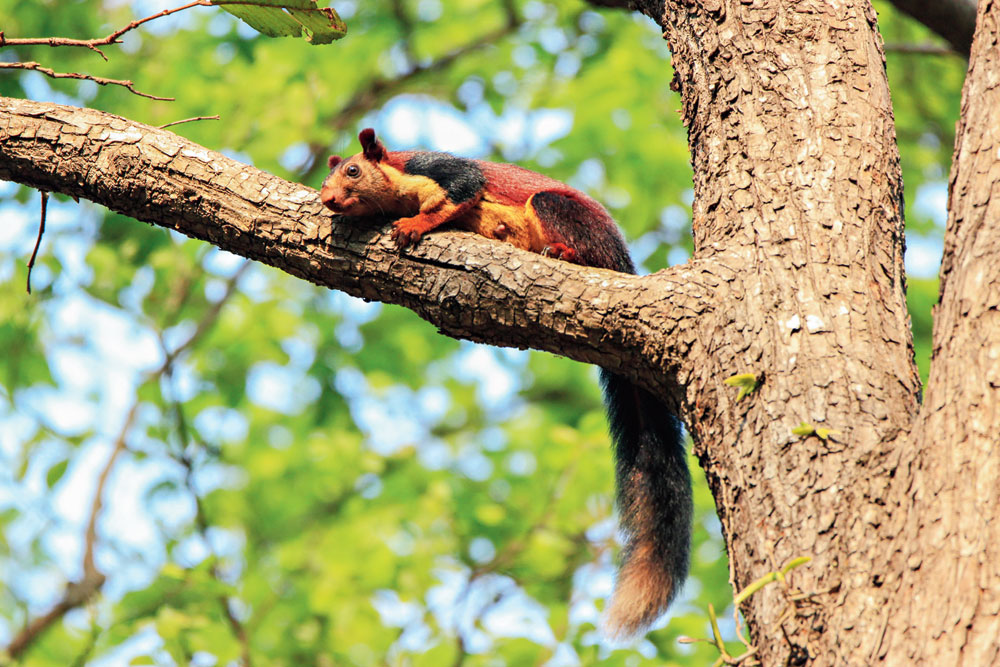 Right in front of the car on a sal tree was not one but two playful Indian giant squirrels
Picture: Karan Mirik Sircar & Torushi Sircar
Tarun Sircar   |   Published 25.05.19, 12:33 PM

It takes a brave man to want to venture towards Simlipal in April. We took a 320-km drive — a torturous one — to the national park in the Mayurbhanj district in Odisha. Patches of bad road, red dust and the occasional sharp shower greeted us; and imagine driving at night when the stubborn kind steer with headlights on high beam. I enjoyed the experience because I was not behind the wheels. My son was!

Driving behind a queue of trucks is madness, the snail’s pace tests the patience of the best of drivers. We made an overnight stop at what seemed the only option, around 150km from Simlipal. The food was okay, the manager rude, and the electricity kept playing games. Making us bid bye-bye to sleep were sparrow-sized mosquitoes.

Early next morning we resumed our journey, with a cool breeze and the GPS keeping us company, the latter in stretches. Luckily, I had a printout of the route. One must admit that the scenic beauty of this part of the country is reason enough to head out in a car. Gently undulating hills covered with the most amazing shades of green, a ribbon of dark, tarred road snaking through, red mud deposits in undulating, uneven heaps on both sides… it was all that a long drive should be — intoxicating and soothing.

We followed the only kaccha forest road that curve its way through gigantic trees and carelessly-strewn rocks. Sunlight sneaked its way through the dense canopy to highlight certain portions. We strained our eyes to catch a glimpse of a deer or a boar or an elephant. I wasn’t even dreaming of spotting a tiger or a leopard. Nothing. Nada. Zilch. Soon we reached Kumari Machan where the aroma of freshly-cooked food wafted its way to our rooms while our stomachs growled in anticipation. The food was great and the service even better. The long drive and the good food made us sleepy.

I woke up to the sound of a yelping puppy. The sun had nestled itself on top of a nearby hill. The setting sun bathed the forested hilly terrain in a dreamlike light. I sat back and allowed my eyes to take in the details, completely at peace with the surroundings and myself. It was tranquil and de-stressing.

That’s when the drum beats began. Wasn’t this a national park? How were they allowed to use speakers and psychedelic lights deep within the forest? And where were the officials? The lovely dinner offered temporary relief and the temperature dropped dramatically. It was nice and pleasant. Post-dinner, my kids enjoyed themselves playing with numerous dogs, including the yelping puppy.

Up early next morning, we were greeted by some noisy vernal hanging parrots. At last we got to see something. Photographing these birds is another matter altogether. A quick breakfast and we were off, on our return journey to Calcutta. We were disappointed, frustrated and tired. Not even one mayur in Mayurbhanj?! Imagine driving 300km and not getting to see anything at all.

I prayed hard. This time, I was behind the wheels and we decided to switch off the AC to enjoy the fresh jungle air. And voila! Right in front of the car on a sal tree was not one but two playful Indian giant squirrels.

Just when one’s mind reaches that zone of obliviousness to looming EMIs and unpaid bills, bam! And you’re jolted out of this blissful state by a small — but deep — hole in the middle of the highway. At this point, one can only pray that the car’s shock absorbers do their duty while a sign or a signal of reaching somewhere appears. For us it was Jashipur, a small, busy and noisy town that appeared out of nowhere. It was our cue to turn left and proceed towards the densely-forested area. We stopped to ask, for the GPS had stopped working. We were on the right track and the fresh forest air was a welcome change.

A 13km drive took us further into the forest. As the foliage got denser, the air fresher, a stream meandered past large rocks, flowing parallel to the tree-lined road. The occasional chicken darted across the road, testing the driver’s reflexes, while stubborn goats refused to give up their spot in the middle of what was our path. But we managed to reach the check post.

Pin-drop silence. That’s what you experience once the wooden barrier at the check post is crossed. The transformation of the forest was sudden as it enveloped us in a magical world of green while the only sound was the gurgle of a nearby stream and an occasional bird showing off its singing prowess. This was peace, pure and unadulterated.

We were treated to the most spectacular and amazing display of aerial acrobatics for 30 minutes. The speed and agility of the squirrels were matched by their daring jumps and quick manoeuvres. What was even more fascinating was their signature call — a series of high-pitched and staccato crackles and chirrups. The lord indeed works in mysterious ways. Besides their remarkable show, they made us stop and admire the various sights and sounds of the jungle. Almost on cue we started spotting other creatures, mostly birds.

While we were watching the show put up by the squirrels, my son spotted a crested serpent eagle high up on a branch. It was busy scanning the forest floor for signs of movement. Our frustration was replaced with this new-found enthusiasm and a sense of optimism. Then my daughter started spotting more birds, first a tiny little pale-chinned flycatcher, quickly followed by a brightly-coloured white-rumped shama. Our frowns were replaced with grins.

The sport of spotting birds took on a keen sense of competition between the kids as one spotted a black-winged kite, the other pointed to a small minivet (male). The magnificent colours of the minivet left us in awe of the wonders of the forest. My wife, armed with her spectacles, then spotted an orange-headed thrush. Many photographs later, we happily compared notes, appreciating the pictures of a blue-bearded bee-eater. The icing on the cake was this tiny red-rumped swallow that chose precisely the very moment we decided to leave to swoop down to a puddle of water for a sip.

My prayers had been answered. Simlipal wasn’t as bad as we thought it was. We were the ones without patience and understanding of the forest with all its creatures. Then we drove away in search of the rosogollas… apparently they originated in Odisha, just like you get tigers in Simlipal, I guess!