The Telegraph helps unwrap a birthday gift for an academic extraordinaire 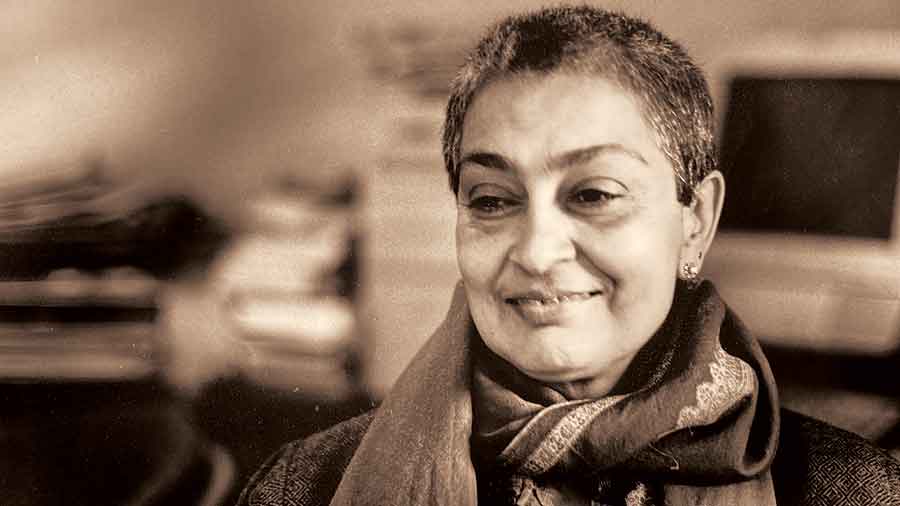 In the late 1970s I used to work with Pam Crain, the jazz singer. I was doing the lighting… She never let anyone light her other than me. ‘He somehow manages to make me look younger,’ she used to say.” That is Naveen Kishore, founder of Seagull Books, sharing an anecdote from the days when he was a theatre lighting designer.

Gayatri Chakravorty Spivak’s 80th birthday is around the corner and Naveen, who has known this cult academic for long years, is, in characteristic style, working into a pile of memories, anecdotes, philosophies, parallels, even contraries. It is a jhaal-muri of a narrative; everything lends flavour, but the ultimate taste comes from the master churn.

The story about Crain loops in rather tangentially, but the bit about light effect sticks.

On the occasion of Spivak’s birthday, Seagull is publishing Living Translation, a collection of her writings on translation. “After all this is her home too. And this is a gesture of affection,” says Naveen. According to the publisher, this is in keeping with the Seagull tradition. He says, “When Mrinalda (Mrinal Sen) turned 75, we published a 100-page excerpt from a larger collection of his writings titled Montage without telling him. Next, we got his close friend M.F. Husain to come down from Bombay to present the first copy to him. Husain sahib hid in one room amidst the bookshelves. Mrinalda ambled up to them and came face to face with his dear friend. There was a loud scream and then they hugged…”

Naveen cannot seem to tell Spivak’s story without invoking other associations or “conversations”, as he calls them. Him and director Mrinal Sen.

Him and the artist K.G. Subramanyan. Sometimes he offers a reason. “I lump Mrinalda and Gayatridi together because their mental landscape has always carried us [Seagull] and our concerns.” At other times he doesn’t and you are left wondering. But he is the lightman of this narrative; it is he who is controlling the final image.

Recalling his first sight of Spivak, Naveen says, “I was in England and I was watching a late-night BBC programme. I remember seeing this tall woman of great personality amidst a gaggle of male white scholars. This must have been October 1983. I knew of Gayatri Spivak but I did not have a visual image of her. Those days, images did not spread like they do today. But it was fascinating to watch how she was holding her own in what was clearly a very provocative environment. Six months later she was in Calcutta. And much later she would go on to translate Mahasweta (Devi) for us.”

No celebration of Spivak is possible without reference to this Jnanpith awardee from Bengal; soldered as they are textually. “Gayatridi is after all credited with having introduced Mahasweta’s text and writing to the English-speaking West,” says Naveen.

He talks about how Mahasweta Devi’s writing was fused with her real life — legalities, courtrooms, cases, dead bodies. As he sees it, a philosophy binds the translator and the translated. He says, “She (Spivak) captured all of it (the social context), discussed it, brought it into international discourse, and then was influenced enough to start schools in that geography (Purulia) unsung for about three decades...”

There is this thing that Naveen says of Spivak. “She is constantly on the move. Africa, China, Calcutta. She comes here eight, 10, 12 times a year. She is constantly arriving.” But Naveen’s stories don’t have endings; they dovetail into each other. Spivak reading from Breast Stories and Mahasweta Devi sitting in the audience. A reading from Song For Kali, a translation of the 18th century mystic Ramprasad’s devotional songs. Mahasweta Devi singing Jhumka gira re in her raspy voice and Spivak singing “a flawless Ramprasadi gaan”. Mahasweta Devi and Spivak. The Fallout. The Fadeout. The Reconciliation. Spivak at the reading of Kenyan writer Ngugi wa Thiong’o’s book at Seagull; queuing up to get her copy signed by him. Spivak talking about “old feminist comrade and friend” Frigga Haug. Spivak taking the train to Purulia. Spivak helping eager questioners formulate their queries at Q&A sessions after a lecture or a reading. Spivak’s letters. “Dear Naveen… For me, Calcutta is not a place only of memories. It is in the history of my present. It is becoming also a place of departure for my intellectual home in the villages of Birbhum.”

Naveen says, “I remember an exchange in which she shared that her mind was full of images of migrant workers walking thousands of miles to get home. Her heart was heavy. She spoke about Mahasweta Devi’s Douloti the Bountiful, which she saw as a feminist literary representation of such a walk home.”

As birthday stories go, this one makes for a perfect wrap. This is Spivak writing to Naveen. It goes: “Let me tell you a story. I was born on the 24th of February.  By the solar calendar, adjusted every which way.  By the lunar, it was the Full Moon in March, Phalguni Purnima, the Lovers’ Moon. I liked it. Shakespeare, knowing nothing about the lunar calendar, wrote of the child born on 24th February: ‘She’s a woman, therefore to be woo’d/She’s a woman, therefore to be won.’ I was born, Mother told me, on a Wednesday afternoon. And Wednesday’s child is, of course, full of woe. So what, love and loss can live together (sic).”

Completing his Pam Crain story, Naveen had said how he admired her for her survivor’s ways, her ageless spirit. Could it be then that the lights didn’t make the singer look younger? Could it be that he had merely worked them to translate her essence, just as he has translated Spivak’s?