‘Fragrance is an opportunity to celebrate every day’ 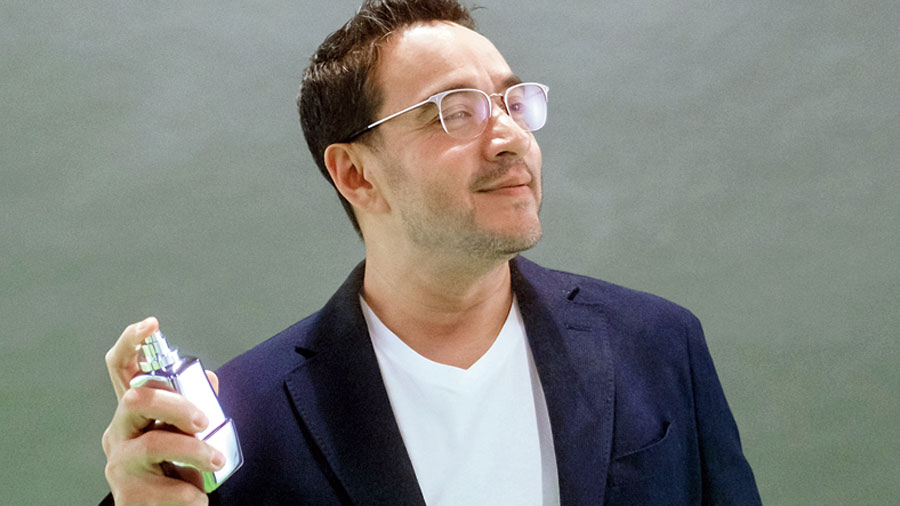 Chatting with Abdulla Ajmal is like catching up with a friend. He speaks from the heart and you can feel his warmth. The business mentor and perfumist, NHA Division, Ajmal & Sons, India, was speaking to t2 from Dubai about their collaboration with AND & Global Desi from the House of Anita Dongre that has resulted in a line of fragrances. “Fragrance is an opportunity to celebrate every day. We craft memories,” he says. His family has roots in Assam. “We are from Assam... my last uncle onwards, we are all from Bombay... born and brought up in Bombay... before that everybody was born in Assam. I have spent a considerable amount of time in Assam. All my holidays were in Assam,” he says.
Abdulla has spent time in every division at the 70-year-old Ajmal Perfumes, but perfumery and product development still remains close to his heart. You feel he is an emotional man when he talks about certain fragrances that remind him of his mother. “Our industry is not just about facts and figures. It’s got to do with emotions. We are in the communications industry. I wear a fragrance which is fresh... so I want to communicate a certain part of my personality. I call it invisible jewellery,” he says.
Abdulla relishes mustard fish at home and mustard seeds go into their perfumes too as a raw material! “Fragrance is an opportunity to celebrate every day. We craft memories,” says Abdulla as he takes us through AND X Global Desi X Ajmal Perfumes.

Tell us how you became a perfumist…
I am the first of the third generation (in Ajmal Perfumes). In humour, light-heartedly I always tell my cousins I am actually two-and-half generations. My youngest uncle who was my mentor was only seven years older than me. I was very fortunate... I got to learn from him and hear a lot of stories from my granddad who was the founder.
I was born in Bombay and did my SSC in Bombay from St. Xavier’s. I am a Mumbaikar and Indian at heart, regardless of where my formative education was or the amount of time I have spent outside of my own country, I am passionately Indian and that’s what culminates into the story of what we have today. I finished my high school in Bombay, did my O Level in Dubai, went to England, did my degree and my masters and came back to Dubai. By that time, Dubai was home because we had moved to Dubai from India in 1988. In our industry, you cannot go to a university and learn. My youngest uncle was in fact one of the people who created the fusion of east and west. I started training under him.

What was it personally for you to grow up in a world of perfumes?
Perfumery is literally in my blood. Among other things, we used to trade in saffron as well. Indian saffron is the best in the world. Fridge mein paani se zyada saffron rakhtey thhey because you have to store saffron in a cool place. So, jo paani rakhha jata tha, usmein bhi saffron ka infusion aa hi jata tha. So, I actually grew up drinking water which was laced with saffron.

I used to play with Oud literally from the time I started crawling. We are very well-known for Oud. Fragrances are peaceful. It takes me away from all the numbers we have to look at or from the things that life throws at you.

What are the signature ingredients in a bottle of Ajmal Perfumes?
My granddad started with Oud. The best quality of Oud comes from Assam. That’s where our heritage is. So much so that we have started doing Oud tours since the last four-five years, where we take a perfumer from the west to Assam. Today we use raw materials from around the world. There would be access to anything up to 2,000-2,500 raw materials, but Oud remains the signature, but it is not always used in all the fragrances. If we are making a high-end signature fragrance, then we use Oud, rose oil, jasmine... eastern raw materials. Today we do fragrances as light as most western occidental fragrances to the darkest, Arabic-type fragrances.

How did the collaboration come about?
Few years ago when I started travelling to India more for family reasons, I started realising that I came back home again in some ways. I felt India was ready for my fragrances. The Internet and travel has exposed people to so much more. India is a unique country in our industry. North mein jo cheez chalti hai woh south main nahi chalti. Rose is loved in the north and not so much in the south and jasmine is loved in the south and not so much in the north.

Anushka Sharma will pull off AND’s Love Muse.
Sourced by the correspondent

I spent about a year travelling in India and you learn about the culture through food. Perfumery is like making food. Everybody has a different touch.
Close to two years ago, we got the opportunity and we started talking to the House of Anita Dongre. Globally the touchpoint of a brand’s entry is with fragrances. They have a huge number of loyal customers. Typically, while developing a fragrance, the marketing team would do their research, come back and give the brief to the perfumery and design team and you do some market research when you have some options. Here, we had a base of consumers who knew the kind of things they like and more importantly, the kind of things they don’t like. That’s what became the base for developing this entire range.

Ranveer Singh has that personality where he could pull off Soulful Trance by Global Desi.
Sourced by the correspondent

We have a range of four AND and four Global Desi fragrances and also four body mists of each. We don’t do ETD’s (eau de toilette), almost as a rule in Ajmal. We believe that the value and quality of fragrance comes (alive) in an EDP (eau de parfum). It doesn’t have to be ridiculously strong. You can still have a soft and intimate fragrance and it can still be an EDP.

Dreamy Daze of Global Desi could be pulled off by Priyanka Chopra.
Sourced by the correspondent

The fragrances cover different kinds of families. Some of the fragrances are such that they can be used by men too if they are adventurous enough to try it out. My favourite in the AND is one called Eternal Radiance. It’s soft, musky and not overwhelming. It’s got white floral notes. It lasts throughout the day. The typical AND consumer is a working woman. It’s got a velvety richness to it. It is elegant and keeps you fresh throughout the day. Then there is the one I really like. It is called Love Muse. It is a little more fruity with a little woodiness. This can also be used by men. It’s got sandalwood as the base note and it has hazelnut, grapefruit, mandarin.

Dreamy Daze of Global Desi could be pulled off by Deepika Padukone.
Sourced by the correspondent

Do you think the lines are blurring between fragrances for men and women, with so much happening in the world?
The lines are blurring because the new consumer, particularly the millennials and the Gen Z don’t want to see that kind of a differentiation. It is about raw materials now. If tuberose relates to you, then how does it matter if it is typically a female raw material. Men are the ones who are more finicky and if they see a word like ‘rose’, they would say, I am not sure it is for me. That’s not the case any more. It has changed dramatically over the last 10 years.

Which country is a perfume haven, besides the usual favourites?
When I was training or growing up, Europe, particularly France obviously, was the epicentre of perfumery. But for me, in the last few years and increasingly so, it is India. India has such diverse profiles, because of the kind of spices and food diversity that we have, there is a huge inspiration.