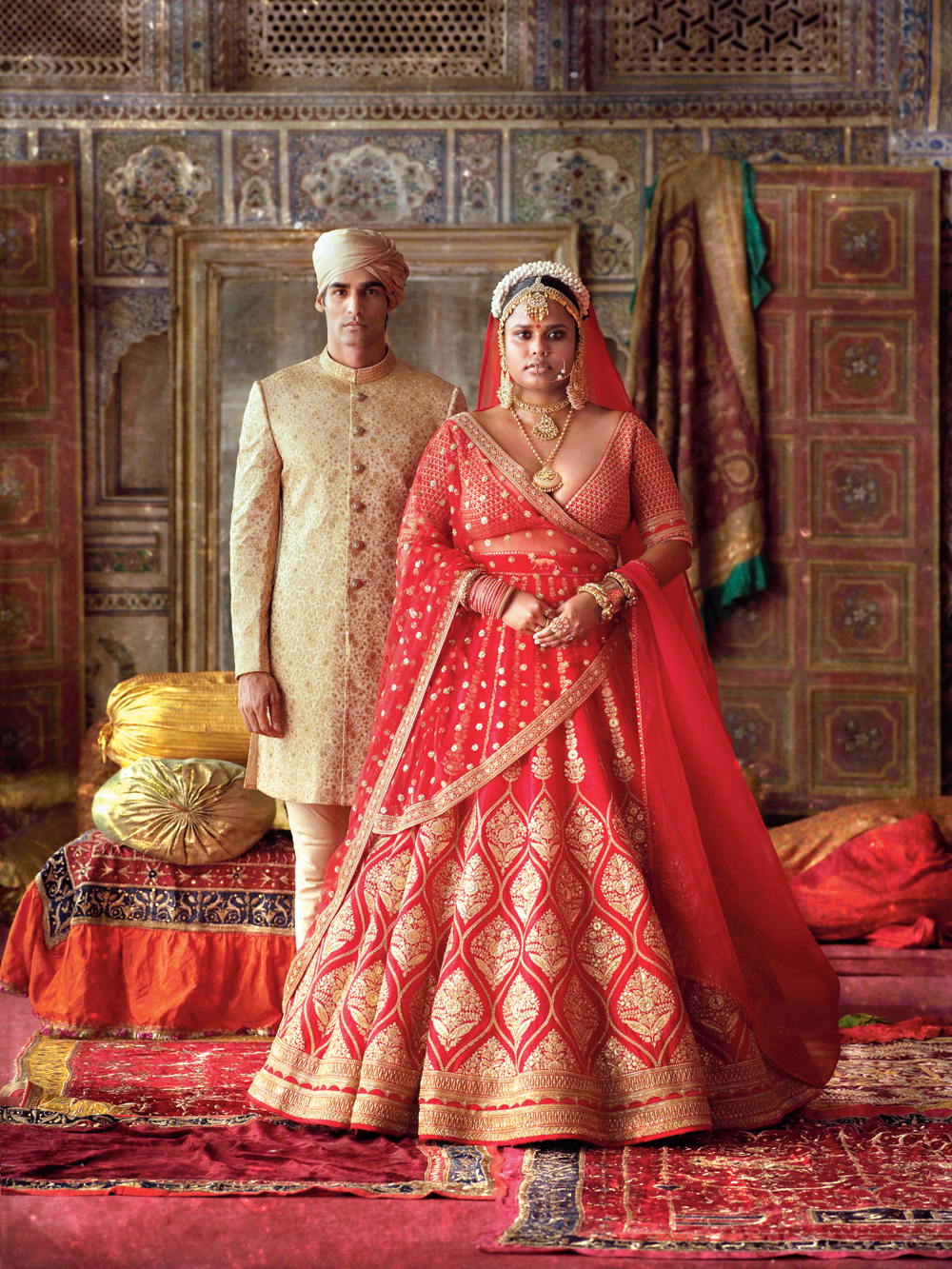 The voice of the woman who was caught in the eye of the storm, however, was completely drowned out in the midst of all the online noise.
Tarun Khiwal
Rushati Mukherjee   |   Published 22.03.20, 02:05 PM

You may not recognise Varshita Thatavarthi by name, but you’ve definitely seen her images. The 25-year-old Chennai-based model’s image went viral after ace designer Sabyasachi Mukherjee posted a picture of her on Women’s Day, with the caption, ‘This International Women’s Day, celebrate confidence’, but not in a positive light. The creator was accused of tokenism and of profiting off feminist causes. The voice of the woman who was caught in the eye of the storm, however, was completely drowned out in the midst of all the online noise. Here, she speaks out about the experience for the first time…

Tell us about your first meeting with Sabyasachi.

I was moving to different cities to find a footing in films, like Bangalore and Hyderabad. It didn’t work out. But when I had been in Chennai for a few months, there was a jewellery exhibition at the Taj Coromandel where Sabya spotted me and asked me if I wanted to be part of the campaigns. I was not a model on the same scale as this before the meeting, partly because I don’t have the height to be a ramp model.

Did you enjoy the new experience?

Absolutely. You can feel insecure when you’re surrounded by top and former supermodels models of India, like Indrani Dasgupta, Nayanika Chatterjee, Sheetal Mallar and Carol Gracias. These are the people I’ve grown up admiring and to suddenly stand next to them in the queue and walk with them was very strange! But Sabya doesn’t treat anybody differently, he is very friendly, he always gives you that attention and care to make sure that you are comfortable, that you can walk in heels, that you feel confident. There was a lot of camaraderie on set and there’s so much love and warmth around you. His team has worked with him on all of these events so they have imbibed their values and ethics and qualities. They’re very kind, helpful, professional and efficient.

What was your favourite look from among the ones you modelled?

Of all the looks I modelled, my favourite is definitely the green lehnga with the golden V-neck blouse. This is the look that got trolled online, because apparently heavier women are not supposed to wear deep-necked clothes. I believe that all women should be able to wear whatever they feel confident in. I may choose to wear a higher neck, but just because I’m plus size doesn’t mean I should be forced to wear one. There’s no rule book like that and if there is, it’s unfair!

Tell us about the trolling you faced.

The trolling was heartbreaking, especially in response to the Women’s Day post. Even the pictures from the Charbagh collection that I personally loved, were mocked. But I came to learn very early in life, through experiences in my childhood and at school, that trolls amount to nothing. I’m here for the women who have messaged me ‘congratulations’. They are the ones I’m listening to.

What is your response to those who suggested that your inclusion was just tokenism at play?

I don’t agree at all, because I have been a part of multiple campaigns by Sabya long before Women’s Day. I was also a part of Sabyasachi’s Mumbai runway show in April 2019, the shoots for his Kashgaar Bazaar collection and his Fall/Winter campaign and multiple other campaigns since then!

How has the Sabya campaigns impacted your life? Have you been getting more modelling offers post that?

Absolutely! I can’t actually talk about any of them because they involve NDAs, but people have sat up and taken notice because he took a chance. People also recognise me a lot more — people come up to me now and tell me how much they loved the pictures, which is always a wonderful feeling.

You’ve mentioned that you’re uncomfortable with the tag ‘plus-size model’ because only people of a certain body type are called ‘plus-size model’, while everyone else is just a model. Can you tell us a little more about that?

I never aspired to become a ‘plus-size model’. When Sabya asked me to be a part of the shoot, he didn’t say, ‘Oh, I’m taking you because I wanted to bring about this change’. He took me because he liked my skin tone and he loved the curves. He just wanted somebody beautiful and he found me. But the fact that I’ve been associated with the body positive movement is a great thing. It was just something, a platform, that I was not prepared for. But I’m in this place now where people actually celebrate me. They celebrate my curves, they celebrate my complexion, they celebrate me for being Indian, and I am very proud that I’ve been made a part of this conversation.

Do you have any plans to take this kind of body-positive activism further?

Of course. I now want to be the one leading the way and educating more Indians that it’s okay if you look a certain way. And I’m not just talking about those who are plus size — it’s actually got nothing to do with being plus size. There are women with all kinds of bodies who are just uncomfortable with the bodies they have. So I want to be somebody who is able to tell people that no matter what size you’re in, there is always room for you.

You’ve also said, “The industry notoriously promotes body discrimination”. How can designers and models and other industry insiders help change this problem? How do you think we, as readers and consumers, can fight against that?

I think if women start accepting themselves as they are and not think that someone needs to fit into any kind of body size requirements to be beautiful or even to be a model, the change will automatically happen. As readers, we should make our voices heard about this. We also need decision-makers within the industry to come out in support of this. There needs to be more opportunities for women like me who don’t fall into normative categories — and who made these categories normative, anyway? Why is a size 2 normative and a size 12 isn’t?

What made you first realise that you wanted to be a model?

I actually always wanted to be an actor. When I was 19, I had lost a lot of weight. That was when I started modelling because I thought it would help me get into films. It never worked out because I was never considered fit to be a part of any of these prestigious agencies that I applied to. I was studying journalism and mass communications from Manipal University then. After I finished the course and I was interning at an advertising agency, I realised that I needed to break free from the confines of an office space. I always wanted more than that.

How did you deal with rejection? What gave you the determination to keep going?

For five years, there was rejection not only in modelling but also in film, where I was body-shamed, and for my dusky skin. Girls with my kind of complexion are few and far between in any film industry in India and they are stereotyped. The commercial filmmakers don’t want you and the ones that do, make fewer films. But I will never let go of my dream of becoming an actress. I have been a part of this change in the modelling industry and I would like to bring that to films as well.

As an actress, what sort of roles would you like to play?

I grew up wanting to be a strong female lead in Indian cinema, telling stories in which I get to perceive a deeper truth, emote and convey a story in a role that is supportive of female empowerment. I’ve always been infatuated with Mani Ratnam’s films and heroines. I loved Revathi in Mouna Ragam. It’s a Tamil classic about a woman who is forced to get married to a guy and after the marriage, she makes it very clear that she wants a divorce. This movie was made in 1986! I also really like Aishwarya in Guru because the story was set before and after Partition and she decides to elope with her lover. They’re unusual women, very ballsy and ahead of their time. I would love to play women like them.

All of your favourites seem to be stories about love beyond barriers. So you’re a romantic at heart?!

Of course! I’m a Cancerian, so I must be.