Turning the limelight on Indian crafts for a cause

With a formidable repertoire of handloom and handicrafts such as ours, it’s but natural for us to associate a sense of pride and loyalty with our weaves and crafts 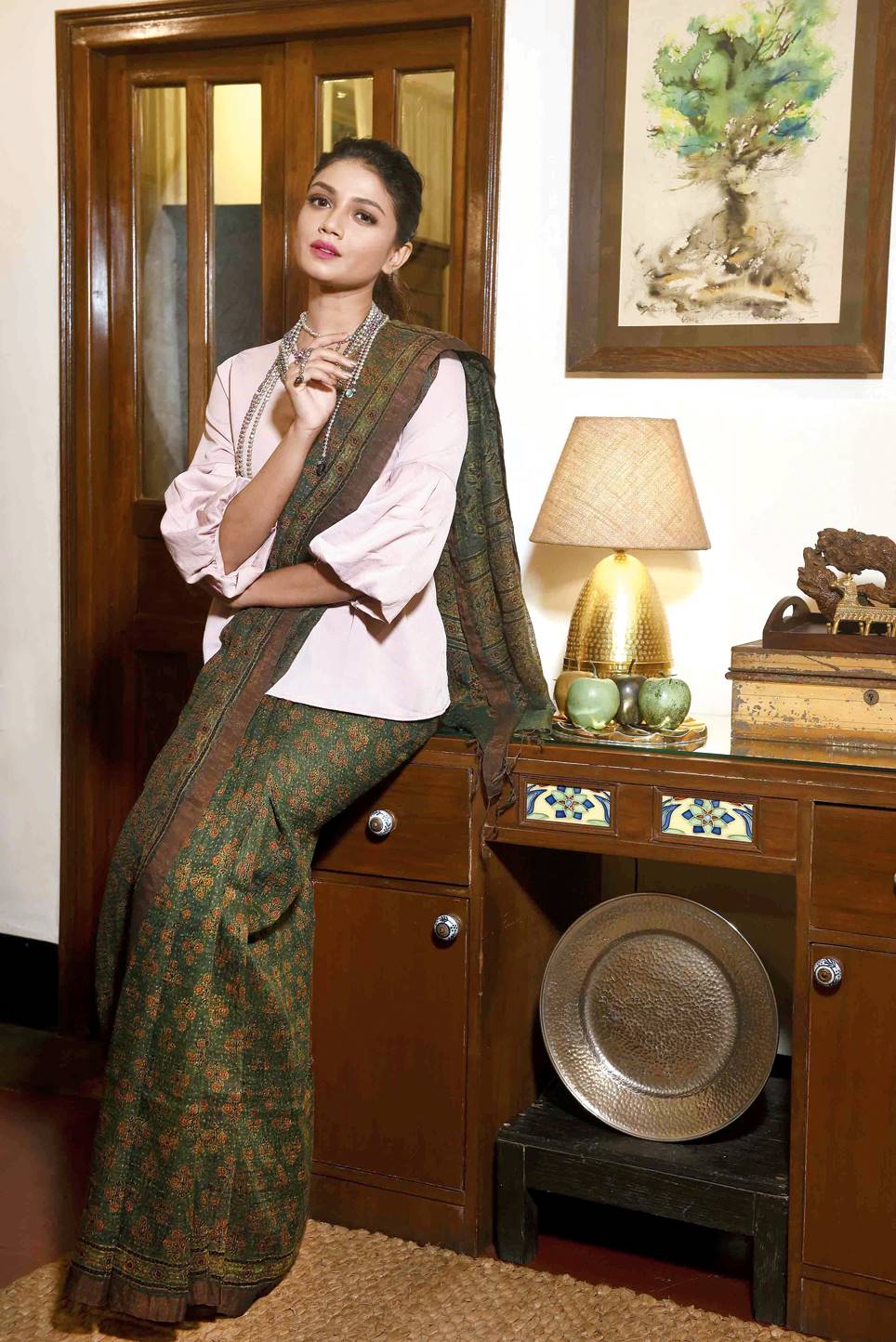 Look 1: Silk linen sari in Ajrakh print A unique form of block printing that originated in Sindh, this Kutchhi craft is centered around the village of Ajrakhpur in Gujarat. Ajrakh is an ancient craft, with its origins traced as far back as the Indus Valley civilisation. Traditionally, fabric derived from the cotton grown in the region was used to print upon but now, like this specially woven silk linen sari, alternative but natural textiles are also used. The colour of this sari is different from the usual and more common reddish-brown (madder) and indigo derivatives of blue, grey and black. The look is accessorised with strings of natural pearls with semi-precious stones on the neck and handcrafted silver rings on Sauraseni’s fingers.
Pictures: Pabitra Das; Styling: Sumit Sinha & Anannya Sarkar; Make-up & hair: Abhijit Paul
Anannya Sarkar   |     |   Published 09.09.20, 08:49 PM

Kota, Chanderi, Maheshwari, Benarasi, Bhujodi, Ajrakh, Khadi, Jamdani, tussore, ikat, Bhagalpuri, Bagru, Kantha, pashmina, Jamevar and more, so much more! With a formidable repertoire of handloom and handicrafts such as ours, it’s but natural for us to associate a sense of pride and loyalty with our weaves and crafts. And what is intrinsic to that is the very human face of that industry, often limited to the hinterlands, that has borne the bulk of the brunt of the humanitarian crisis caused by the pandemic. Amidst a free-falling economy, the dissolution of the All India Handicrafts and Handloom Boards in July, though debatable, also caused some amount of ripples, though many also admitted that they did not even know it existed. But amongst all the suppositions, it’s not just an assumption but a sad reality that the crisis has hit the lowest rungs of the ladder of our handloom and handicrafts industry, comprising the artisans and weavers, the hardest.

The Zs’ Precinct on Dover Lane, with its impetus for conservation, has always been a quiet, niche treasure trove of unique finds from across the country in the form of a wide range of hand-picked items such as saris, stoles, shawls, bags, jewellery, art and curios. Being acutely aware of the pandemic-induced pitfalls on the weaving and craft communities of our country, curator of the outlet Rajesh Sen joined hands with actress Sauraseni Maitra and t2 to conceive and curate a shoot showcasing some of the best of the outlet’s wares from their diverse range of handloom and handicrafts collection. The proceeds from the sales of this collection are set to benefit weavers and craftspeople.

Therefore last week, a small group of people in strict adherence to social-distancing norms gathered at the quaint Dover Lane address to shoot for this series. What resulted from it are four distinct looks, each carefully curated to highlight a special craft from India and the story behind its painstaking process of creation.

“During this pandemic, the biggest struggle craftspeople are facing is cash crunch since their income has disappeared. Smaller, less fortunate craftspeople have borrowings with which they created their stock. With a total washout of the festive months, craftspeople are either sitting on stock with orders cancelled point-blank or have stock sitting in outlets where they have already supplied. I feel immense pride when I see, touch and feel these crafts. When I work with craftspeople, I see in them a desire to grow and we only need more people to buy our crafts. The Zs’ Precinct will waive their commission so effectively, the range of items from craftspersons, weavers and printers will be sold at their prices — 15-25 per cent less than what is their price today for a month,” said Rajesh Sen (inset), curator, The Zs' Precinct (18/76A Dover Lane, 9007100354/033 24619353). 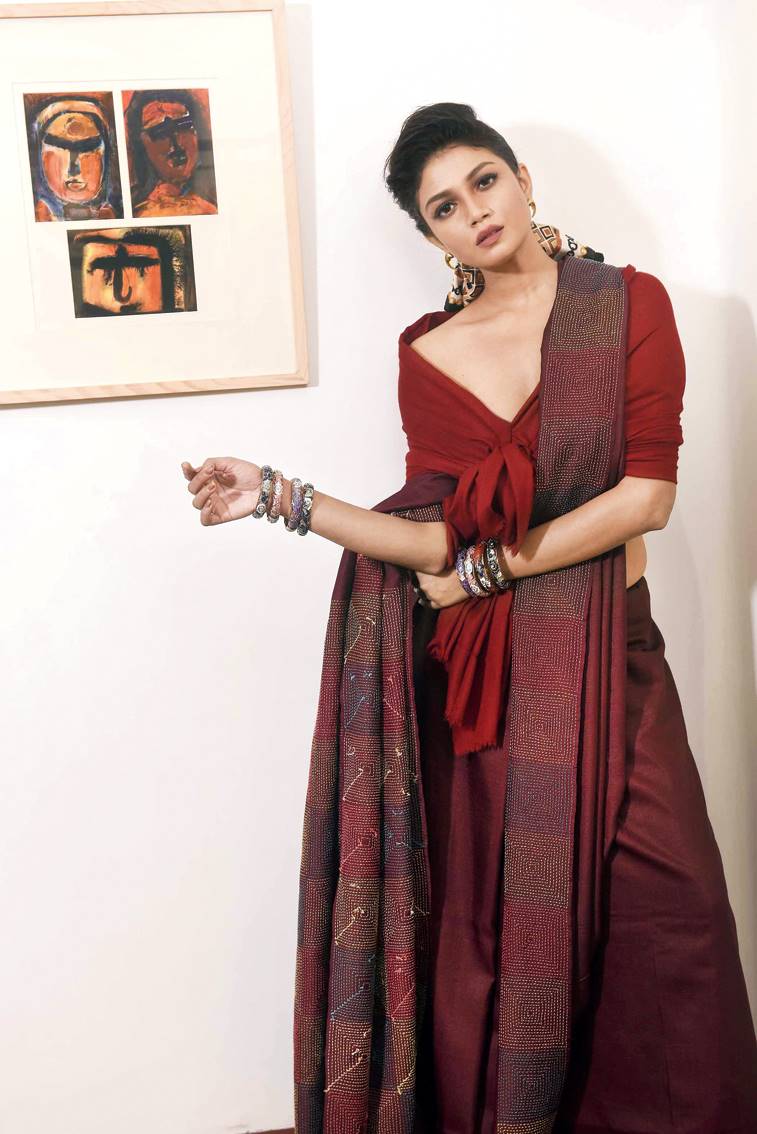 Look 2: Khadi tussore silk sari with a running-stitch embroidered border and pallu This natural-dyed handwoven tussore silk from Malda moves away from the traditional styles of kantha as is commonly seen. The contemporary pattern of squares created in muted colours along the border and pallu offset the rich sheen of the silk body. Sauraseni used a soft handwoven pure wool pashmina shawl from Kashmir tied as a choli.
Pictures: Pabitra Das; Styling: Sumit Sinha & Anannya Sarkar; Make-up & hair: Abhijit Paul 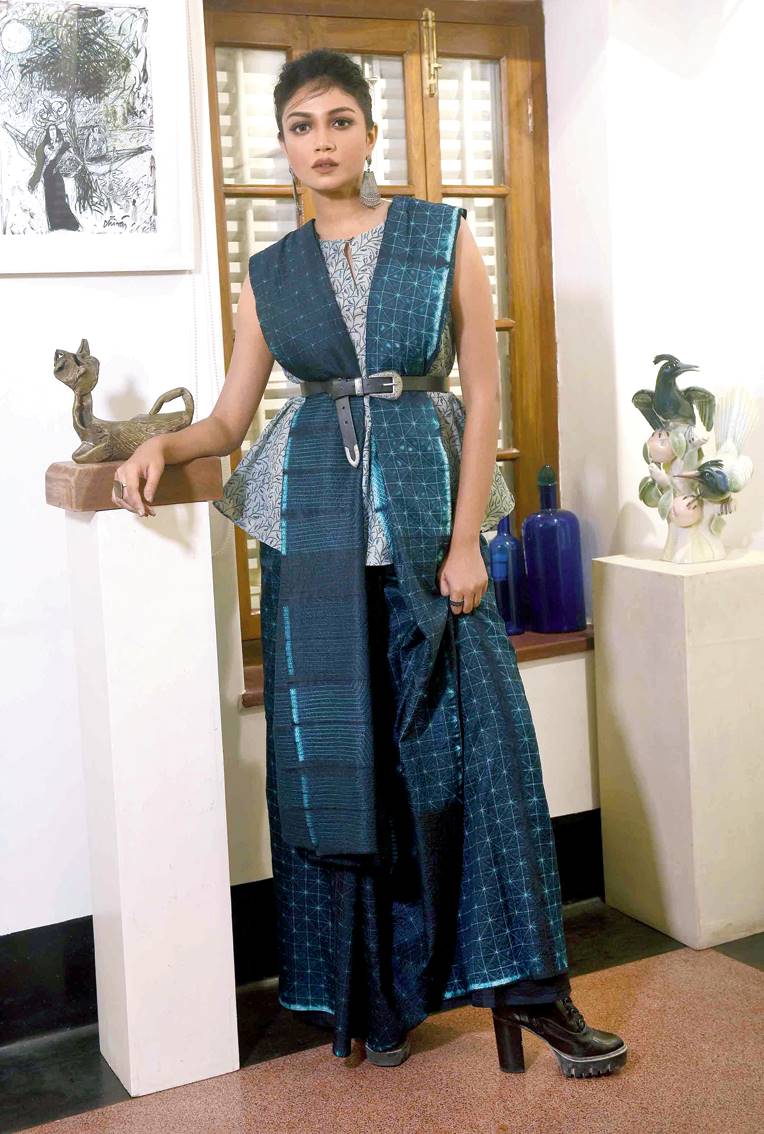 Look 3: Bangalore pure silk Shibori tie-dye sari Shibori is a form of tie-dye that originated in Japan but has developed into a niche craft in India. Here the fabric has been folded into panels and painstakingly stitched together before it is put into dye. The pattern reveals itself once the dyeing process is complete and the stitches are removed. The colour on the sari is as per the panels they were in and the panels closest to the dye are therefore deeper than those folded inside. This is a two-toned sari having been dyed once with a lighter shade, before stitching, which gives it greater depth. The look is accessorised with a short cropped top made in handwoven khadi cotton. It is hand block-printed near Calcutta using hand-cut antique blocks. The dyes used contain natural indigo and raisin.
Pictures: Pabitra Das; Styling: Sumit Sinha & Anannya Sarkar; Make-up & hair: Abhijit Paul 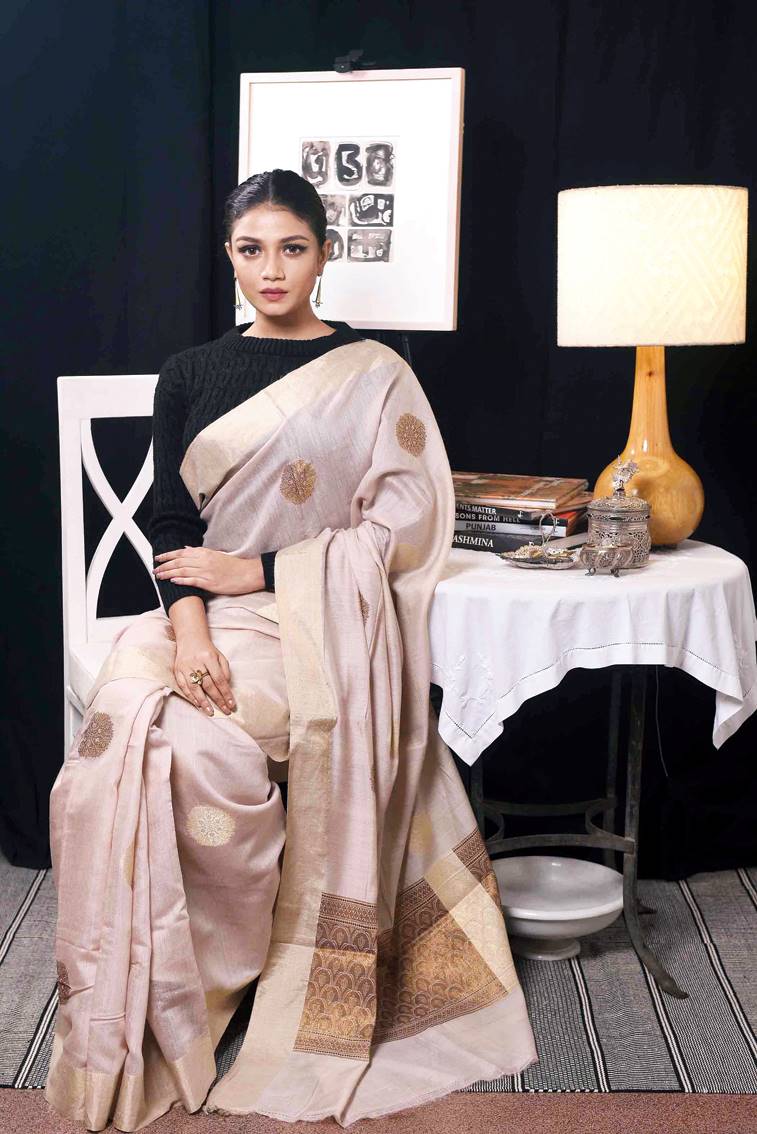 Look 4: Muga silk Benarasi sari with zari Woven by hand from yarn by a master craftsman in Benares, this rich ivory muga silk in its natural colour is embellished with gold and copper-hued zari. Intentionally without an ornate border or all-over body, the simplicity of the design keeps it elegant yet regal. This is paired with floral earrings and a floral ring, which are handcrafted from an alloy of half silver and half bronze.
Pictures: Pabitra Das; Styling: Sumit Sinha & Anannya Sarkar; Make-up & hair: Abhijit Paul
Fashion Handicrafts Handloom
Share
Advertisement
Advertisement
Advertisement
Copyright © 2020 The Telegraph. All rights reserved.