'The universal attitude of the whole project, which is not really about children or adults, but the innocent inside that we all have' 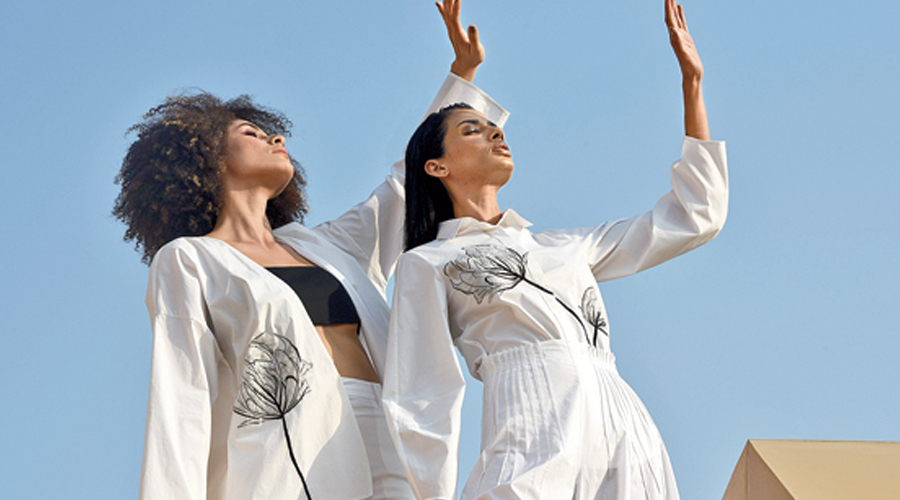 The Joy Project looks cute. How did the collaboration come about?

I always like to look at the structure of things first before looking at its aesthetics. In this case, that was exactly the point. These are not just any kathputlis.... They have a real allure and you can see the quality of the drape, which is extremely rare on a puppet or a doll. The beautiful flow of the material... the impeccably pressed and finished. Plus, the universal attitude of the whole project, which is not really about children or adults, but the innocent inside that we all have. It was touching because of that. Then of course that it’s a social enterprise. They have a real way of looking at the world. There are a lot of things that are positive and also show that people care about striving and coming ahead, which I must say, unfortunately, is not the general attitude one encounters when people are working.

So, this was deeply fulfilling...

Honestly, this was everything that we had expressed as a wish and to tell you the absolute truth, I personally was against the collaboration. I thought it would be one of those ones again. A vast majority of these kinds of collaborations end up with a question mark. This one ended with an exclamation mark. (Laughs) 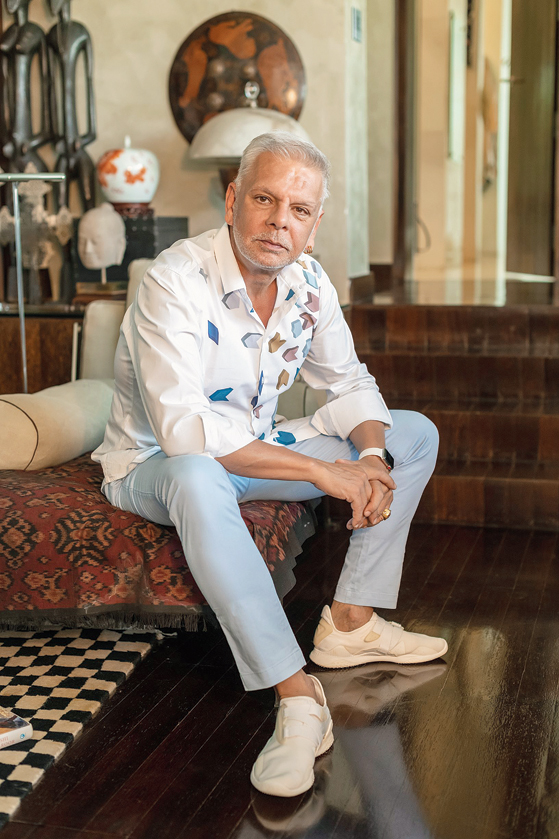 This was different from what you had been doing for the last four decades...

There are not many ways of reaching out to thought procedures of people and not many ways of connecting with them. It depends on how you look at fashion. For me, fashion is a manner. It is a manner which has to do with news. What is news? It is things that happened today. Fashion is evolution in clothing today.
In India, I am sorry to say, the consumer is much more price-focused than quality-focused. The deeper truth is that everything is important. It’s not just the price, but also what you get for it. In this case, there was a match between all these different domains.

These were made from scraps...

That’s where the practical part came in. It was nice to be able to make something out of it which was timeless and still complementary to the current season. This whole enterprise is nicely international the way we are. Multinational in spirit and expression. Bridge culture. Reaching out. Smiling at the unknown. I can’t underline enough that they actually convinced me. 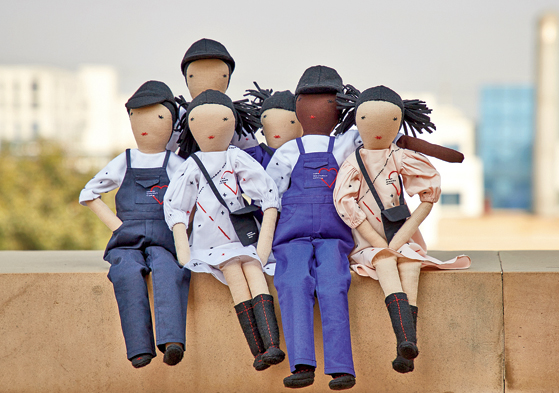 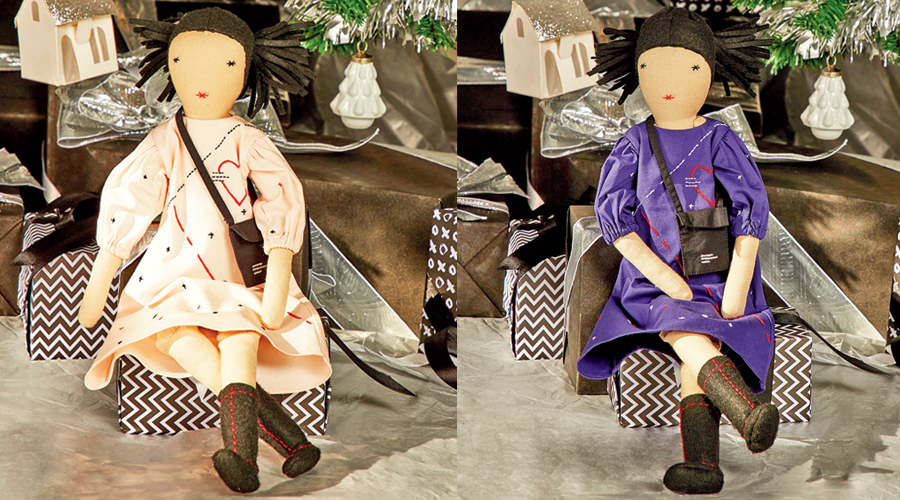 The handmade dolls are priced at Rs 1,999 each

Did you play with dolls as a kid?

My number one passion was my sister’s Barbies. I am talking of my childhood in India in the early ’60s. Obviously we were super lucky that some aunt from Germany had sent my sister some Barbie dolls with some dresses. And, I was totally fascinated... looking at dolls, I was like: ‘Even women have legs also’. (Laughs) In 1962, when I was five, we didn’t know that women have legs! And, when my mother, who is a German, would have two-three of her friends of her age come home, bake a cake... around Christmas time, they would be in suits and nylon stockings. I was four-five and I would touch their knees and couldn’t believe that you could see their legs through it and that they had legs! Their husbands were posted in India.

My father was basically a refugee from Pakistan and he became a lawyer, asking for every penny he needed for his education from his brothers. We are not talking of wealthy, higher-class childhood. We are talking of an elaborated middle-class, international-aspiring kind of a family. All of this came together in such a way that it came as a gift that I felt extremely privileged of something that wouldn’t come my way otherwise.

What do you think of stereotypes?

I am rebellious by nature, even though I am law-abiding. (Laughs) I feel blessed that I arrived in India in 2000, just at the moment the Internet (came into our lives). There was a burst of new generation. I have always loved how kids are outspoken and was always surprised how parents would ask them to shut up afterwards. It’s the worst thing you can do. That expression is the future of social expression of a full society or a generation.

I didn’t want to do fashion for fashion’s sake. I had done that for 20 years. Making facades and doing the most unbelievable artisanal acrobatics to make the most unbelievably expensive, sculptured clothes. I came to India saying this is not needed, we have our own version of lehnga-choli. Everyone knows how to do that. I am not doing that. My point of view always was and still is to accompany people who are interested, to grow towards the global society that we will become a part of and already are a part of. What we save is our own expression from our own part of the world.
This puppet fits in perfectly because it is all about many people relating to it, the cuteness of it and the emotions which go with it, emotions which are important in today’s times, when we are locked up and we don’t have much to say or don’t know who to say it to, rather. 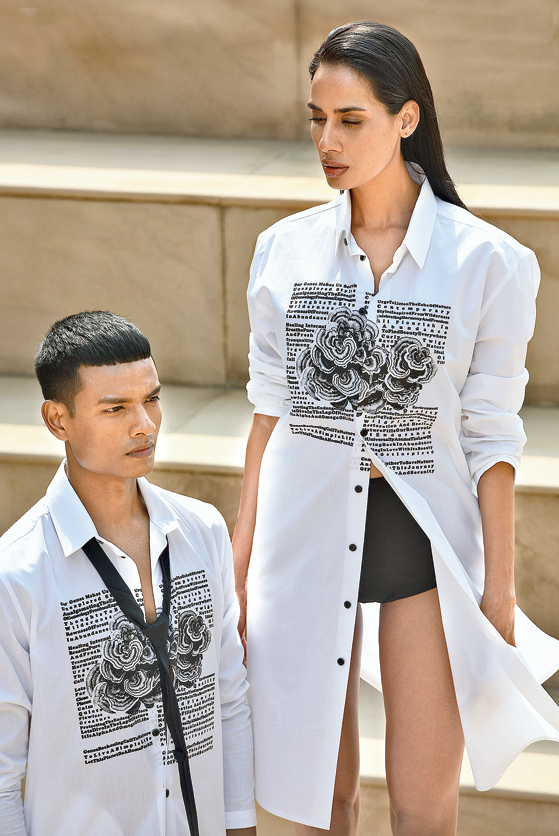 What gave you joy then and what gives you joy now when you design?

Society has changed to such a point that catering to it has become different than it was. Forty years ago when we started, it was normal to have out-of-the-world events in Europe. We had millionaires who would come to Paris with their wives. They’d fly the Concorde, have something made and then fly back. She had to fly back three times for her fittings and she’d complain about how the cost of the dress was three times the cost of the dress. We are talking of people who made images with how they dress. Just look at how people who come to the business-class or first-class lounge today, dress. You find that the service is overdressed because people are so underdressed. You look at the society and you say the society does not need that any more. Steve Jobs would be proud of having 12 identical T-shirts and that was it. Elite fashion is not appropriate any more.

And, on a personal level, what gives you joy?

The most beautiful thing which happened to me was the lockdown in a certain way. It really forced me to come back where I came from. I am very happy with my life right now. After a year of thinking about these things, I have come to conclusions and implemented them into my life without asking too many people. And, developing next projects with that energy. 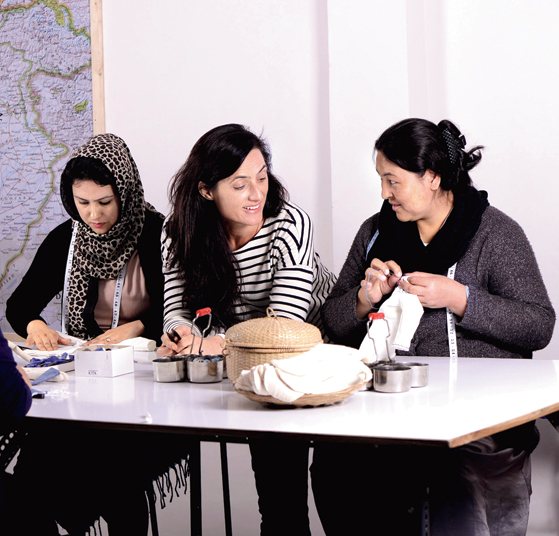 How is it going for Genes Lecoanet Hemant?

From 2004 onwards, we were doing test trial for Genes. The first one was for luxury ready-to-wear. Then it became luxury pret-a-porter and then near couture. Then it stopped entirely. Then it became a laboratory where we thought we have to go for low prices. We opened the shop in Khan Market and it was the right success and approach. Then we moved online. We did a trial for seven-eight seasons online and had a lot of profound insights and with questionable sales obviously because when you are experimenting, you don’t know where you are going. Now, we know where we are going. In the last year, we have come to about five shops. We are already in Calcutta, Lucknow and Chennai.

Look at the Facebook generation that we are. Everyone counts and everyone is a star for five minutes. It makes sense to be catering to that kind of a thought procedure. It sets us apart profoundly.

I am working on ramie, a fibre that grows in Meghalaya, which hasn’t been used properly because they haven’t been able to make it skin-friendly. It is a natural fibre but scratches when you wear it. The wonderful thing is that it grows by itself because of so much rainfall. Cotton needs a lot of watering and chemicals. If we can change the molecular structure a little bit, it’ll be a new sustainable, organic material for the world. I am working with scientists.