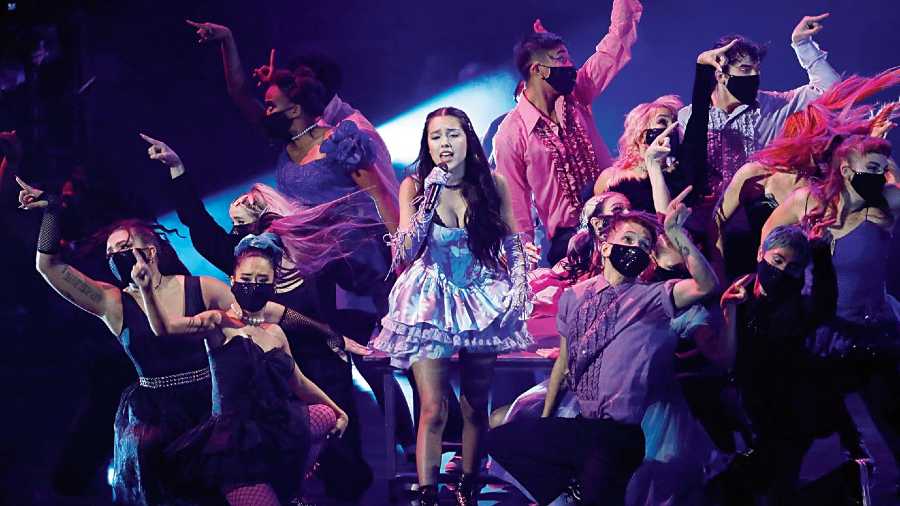 She is the singer making big waves. By the time Olivia Rodrigo left the venue of this year’s VMA — Barclays Centre in New York — she had with her trophies for Best New Artiste, Song of the Year, Push Performance, Best Artiste and Best Pop Video. She said: “Thank you to the fans again and everyone who supported me. This is just so awesome!” The moment of the evening was when Jennifer Lopez turned up to present her the award for Song Of The Year (for Driver’s License). It was like one generation handing over the baton to another. Rodrigo put in a fine performance of Good 4 U as she appeared on the stage on a cloud made with disco balls and butterflies fluttering around. She looked happy, dancing around and high-fiving members in the audience… till she ended up breaking the lens of a camera.  Ouch!

Watching Justin Bieber on the VMA stage after six years brought back that old familiar feeling of what big shows are about. Justin won the Artiste of the Year trophy and after thanking everyone, he turned to his wife Hailey Bieber and said: “I look over here and I see my beautiful wife and I just want to say ‘I love you so much.’” A blushing Hailey returned the love with flying kisses. He went on to say how music touches people and bring them together. To kick off the show, he performed Stay with Kid LAROI… after “falling” from the sky (using ropes!) and landing on what seemed like rocky edges.

Cyndi Lauper presented. Justin Bieber received. Before presenting Bieber his Best Pop award for Peaches, the 68-year old said: “Girls still wanna have fun but we also want funds. Equal pay.” And she also addressed the issue of abortion, which is being discussed in the US: “(We want) control over our body.”

Also delivering a meaningful speech was Billie Eilish, who accepted the Video for Good award from Avril Lavigne for the song Your Power, which calls out people who abuse their power. She said: “We need to protect young women at all times and we also need to remember that we all have power and we have to remember to not abuse it.”

Trying to move to pop territory, Kacey Musgraves put in her first appearance at VMA, singing the title track from her new album, Star-Crossed. The performance began with an acoustic set-up and soon she was standing before seven hearts of which the biggest was set ablaze. The performance had elegance written all over it.

Rapper with a goal

Not only did he rock a sassy outfit on the red carpet, it was like he knew this would be his night, bagging three awards from his six nominations. Besides winning Video of the Year, rapper Lil Nas X also took home trophies for Best Direction and Best Visual Effects. The 22-year-old said during his acceptance speech: “Oh my God! First I would like to say ‘thank you’ to the gay agenda. Let’s go gay agenda!” Before winning the award for Video of the Year, the rapper performed Industry Baby and Montero with Jack Harlow. The performance started with a marching band, all dressed in pink, in front of ‘Montero Prison’. After Harlow’s rap solo, Lil Nas X broke into a too-hot-to-handle dance and ended the performance with Montero.

Pop-rap sensation Doja Cat did an outstanding job as the host of VMA. “I can’t believe they want me to host this but I am really honoured. I was in rehearsal doing absolutely nothing and then I was told that I had to host. And I was like ‘How?’,” she told MTV News before the show. And she did a fiery medley of Been Like This and You Right. Dressed in red, she was suspended by ropes, which added a theatrical touch. And her wacky wardrobe included a chair, which she balanced on her head.

Madonna made a surprise appearance to wish MTV on their 40th anniversary. She walked in sporting a trench coat but then revealed her black leather outfit. The look even had Billie Eilish on her feet. Madonna pointed out her decade-long connection with MTV and how: “They said we wouldn’t last. But we’re still here m*****f*****.”

BTS wasn’t present in person but they made the audience happy. The band won awards for Best K-Pop and Group of the Year and sent in a sweet message: “This was possible because of you guys but we can’t meet you in person.” On receiving their second award, they sang a few lines from Butter, virtually.

And something went down during the red carpet part of the show — a feud between Machine Gun Kelly and Conor McGregor. The two were first seen talking and then McGregor lunged at MGK but he ended up punching the air. Security guards arrived while MGK and his girlfriend Megan Fox moved away. The singer went on to win the Best Alternative Video award.