‘Sarees of Memory’ is about making heirloom today 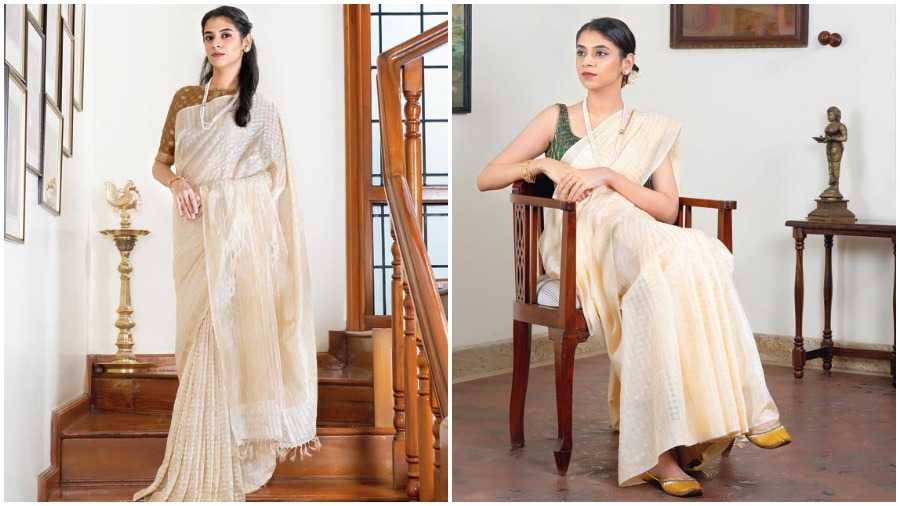 The muted eggshell white with a dull sheen across its seven yards swathe, encased in parallel strips of threads that were woven like a border running along its horizontal length, defined strength, energy, power and sheer beauty. The memory of my mother, draped in this simple stunning sari, with her solitaire diamonds bookending her radiantly beautiful face, a single string of graded basra pearls, contrasted against her long, lush black hair that was pulled back into a large bun resting on the nape of her neck, symbolised an aesthetic sensibility that I grew up with.”

That’s the firebrand “storyteller” Malvika Singh, describing a Venkatagiri sari, delving deep into her rich reservoir of recollections. A slice of which is captured in ‘Sarees of Memory’, a collaborative collection of Venkatagiri saris by The Registry of Sarees’s Yali and Malvika. ‘The Registry of Sarees is a research and study centre with a multi-disciplinary approach that enables design, curatorial and publishing projects in the area of handspun and handwoven textiles’ and Yali, ‘a platform to launch commercial projects that develop from the research and documentation work of The Registry of Sarees’. We chatted with Kshitija Mruthyunjaya , creative director, Yali, and the pioneering and absolutely delightful Malvika, publisher of Seminar and a ‘lifelong patron of handloom saris’.

Malvika, ‘Sarees of Memory’ looks and sounds like poetry...

Malvika: I was very bored one day and I just put together a whole bunch of ideas for 18 saris under a banner which I started in my head called Sarees of Memory. The first exhibition I did was on seven saris from Indira Gandhi’s... — Benarasis and seven south Indian Chettinad cottons — on her 100th birthday. I was lucky to have access to them and we reproduced them and had an exhibition. That was the idea, to see whether the same motifs could be reproduced today by the artisans and their descendants. The answer was yes. The skill lives on and is very robust as long as there are patrons for that skill. I did block prints next and we found all the old blocks and reproduced those.

I had an obsession with trying to get this Venkatagiri as I remembered it as a child or a young woman growing up. That’s what’s so interesting for me... in a random conversation with Ahalya (Matthan of The Registry of Sarees), she said why don’t we do it.... It is a dream that I had which was executed by them, in today’s time. That is the critical point. Times change and the design, aesthetics, motifs, forms, colours of saris goes through a cycle and every now and again one has to sit back and say, let’s go to the root and let’s start again and see whether we can. The thing there which I think is very interesting is to stick to the directory or the geometry of the tradition and infuse it with the colours of the time.

Venkatagiri for me was always geometry and not birds and flowers. That was what the middleman told the weaver the market wanted. There is a place for that and I am not going to pass a value judgment. Equally one has to keep alive what we want the market to be led by... by ‘we’ I mean the weaver, his grandfather and great-grandfather... those traditions need to run in a parallel line and they need to be as pure as possible.... This for me was a great experiment... do the traditional that is patronage, which is what you can keep as an heirloom and it doesn’t have to come from a 100 years ago. You can make that heirloom today which is what I am trying to do with this project. We need to bring it down to its essence once again and then let it grow out of that essence into another millennium.

I am also learning from these girls. The pattern passing and the ability to learn from another generation....

Kshitija, how has it been for Team Yali to collaborate with Malvika?

Kshitija: It has been fantastic to say the least. I think it has transported us back to what Venkatagiri actually stands for. As Mala said, now we are used to seeing certain kinds of motifs and we associate that with Venkatagiri but here when she explained her memories, it took us back to the materiality, the texture, the restraint that we don’t associate Venkatagiri with now. Just with white and gold, there were so many variations and all of those stark memories that she had, just shows how textiles are rooted in our thoughts and how that connects the past to the present. That was a great learning experience.

Malvika: This restraint and the dream of the intangible into the tangible is something you can only do in cultures which are deeply rooted. We are not even conscious of our DNA.

Kshitija: For the weavers too, to go back to the past and say this is how it was done, that was very beautiful in terms of starting with the basics like the white and gold and then the checks and the stripes.

Malvika: When I was 17 and got my Venkatagiri and wore it to someone’s wedding, the tactile feel of the cotton and the zari was pretty much identical. It was soft and you could crush it in your hands. Then suddenly over the years, the zari became the stiff element within the soft cotton. It was incongruous. So, the weaver started to use a cruder cotton to match the crude zari. While I am talking to you, I am imagining this happened. What these girls have done is, made the zari also to be like mulmul. The sari with that one-inch gold, one-inch cotton... the striped sari, I wore it on my 50th wedding anniversary in September and it just made me feel so good.

Malvika, what you are saying has so much simplicity, which is beautiful and has so much happiness...

Malvika: You know, because there is no jargon. I am dreaming of a sari with gold-and-green stripes and the green of the leaf of the mango tree... it comes from observation. People have forgotten how to observe. The business of travelling, exploring, observing, conversing, meeting has become something which is unusual. In my life, it was the usual. Unusual was to go to the Oberoi on a special occasion and have a hamburger in the coffee shop. I am not saying reverse it. I am saying do both. When you say happiness, that’s the mazaa.

Kshitija, what else is the team working on?

Kshitija: For us we are rooted in collaboration again, working and learning with pioneers like Malvika. It is about recording that, whether in a textual or a textile form.

Malvika, yours has been a life led with so much of the mazaa you just spoke about...

Malvika: I was not trained in any discipline and I think that saved me. I was not put into a compartment and expected to achieve something. So, when people ask me what are you, I say a professional dilettante. I do what I want to do and that’s my privilege.

Malvika, what is your take on everyone getting aboard the sustainable wagon?

Malvika: When you make a unipolar world or attempt to make everybody the same... when everybody thinks they have to wear gowns to get married, then it’s a fad and is going to stay for a little while and die. I would love to dye my hair pink and wear a blue sari and go for dinner. That’s mazaa, but when you are aping something... when you are getting married, you suddenly go back into tradition. Why do you do that? Why don’t you get married in jeans or a nice pair of black slacks? ‘We must wear a lehnga with a choli’, exposing your whole body. Nobody got married like that. You wore a long kurti up to your waist. So, they don’t even know what they are wearing. I don’t want to make a value judgment because that’s a fad which will pass.

There has been a huge revival of saris. They are genuinely doing it because they are putting in money where their mouth is. I do think there is a lot happening on the ground and a lot of young people are experimenting with a lot of new things using the traditional base and I find that fascinating. In that process, the skill is allowed to live in some manner, shape or form.