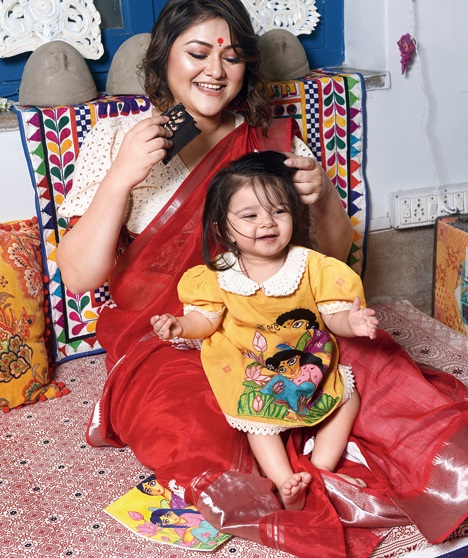 Fourth-time special. That was the October 12 script for actress and new mom Koneenica Banerjee. She stepped out for the fourth time since the pandemic hit, for this special shoot. Daughter Antahkarana’s first proper photo shoot. “I was very excited since morning and realised right after waking up that this is Kiah’s (pet name) first proper shoot. Eta likhe rakhtey hobe. We did do a portfolio shoot when she was three months old, but then she didn’t have the realisation. Now she is much more expressive. Her father (Surajit Hari) is already texting that ‘What is the little model up to?’” smiled Koneenica, in a cat tee because her daughter loves cats! We had settled down for a chat post-shoot at designer Parama Ghosh’s Lake Terrace studio, which houses her label Parama.

A complete natural, we captured Antahkarana in seconds. “She loves the camera. Ja bodmaishi korar kore niyeche, but during the shot she was a good girl. Once after a script-reading session, she had a long conversation with the director! I realised that she has that element. I don’t want her to take up acting, but hole hobe,” laughed Koneenica. With “michke dushtu” Antahkarana’s antics as the playful backdrop for this chat, Koneenica spoke about motherhood and how it has changed her.

What has Kiah done to your life?

She has changed me completely. I was patient before too, but ei boyeshe eshe, bhalobashar shotyi ki ortho sheta o aamai bujhiyechhe. At times, she’ll just keep looking at me and I would be like: ‘Am I so important?’ She has made me believe there is still bhalobasha, but since we are all in a race against time, we don’t get to take that time out. But may be since I have to take out that time now, these realisations are occurring to me now.

Did you take parenting tips from your mother?

We all need tips. Even to raise a kitten or a puppy, we need tips. Human kids are much more interesting. I am still learning all the time. I feel every woman should experience motherhood once. Jiboner meaning ta bodle jai tate. It is a huge learning. I bonded with her in the lockdown.

You don’t feel the pressure to be a good mom?

I am not a good mom. We are all humans and every mom is a good mom. Recently my blood pressure fell so much that I fell asleep singing her lullabies. When I woke up, I saw she was playing. Does that make me a bad mom? There is no competition for moms. What they do, even if dads want, they can’t. They can’t multitask.

What are your dreams for her?

She should be a good human being. That’s why I named her Antahkarana (the inner cause).

1. Parama dressed Koneenica in a Mangalgiri silk with the motif of a hand-embroidered daak er saaj idol. “The pandemic made way for self-introspection. The traditional daak er saaj was getting lost somewhere. I really wanted to do a traditional one like the Bagbazar puja idol. The references are from the photographs we clicked over the years,” said Parama. Antahkarana wore the Lokhhi Meye dress, totally made for her. “The form is of a mother and daughter with the mother tying the hair. I think that’s my most affectionate memory of my mother. After marriage, I missed that so much. The writing is in my best friend’s handwriting,” said Parama. This shot was clicked when we could actually sit the bundle of energy down!
Pictures: Pabitra Das; Hair: Avijit Das; Make-up: Rahul Nandy and Debabrata Majumder

2. Antahkarana looked like a cupcake in this shiuli jamdani sari. “You can’t think of a Puja without shiuli flowers. This Puja we have launched saris and dhotis for kids,” said Parama. Mom Koneenica draped a hibiscus sari. The wooden animal motif blocks on Parama’s table ensured that the little one was engaged enough to flash her cutest smile.
Pictures: Pabitra Das; Hair: Avijit Das; Make-up: Rahul Nandy and Debabrata Majumder

3. From the moment she walked in, all Antahkarana had her eyes set on were Koneenica’s red bindis. This was the fifth one to go off the actress’s forehead.
Pictures: Pabitra Das; Hair: Avijit Das; Make-up: Rahul Nandy and Debabrata Majumder

4. While Koneenica paired a hand-embroidered Mangalgiri shiuli sari with a jamdani blouse with hand-embroidered flowers, her candy-sweet daughter slipped on a shikara dress. “We are calling this the Firdous dress. I think we have missed travelling for Pujas this time. So, I thought of bringing alive a favourite destination, like Kashmir. Antahkarana looks like the girl in the dress, with apple-red cheeks,” said Parama.
Pictures: Pabitra Das; Hair: Avijit Das; Make-up: Rahul Nandy and Debabrata Majumder
Fashion Durga Puja Koneenica Banerjee
Share
Advertisement
Advertisement