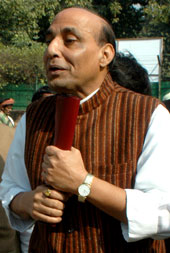 BJP President Rajnath Singh Is Doing A Complicated Political Tango As He Steps Out Of The Shadows Of Party Stalwarts Atal Behari Vajpayee And L.K. Advani. Radhika Ramaseshan And Bishakha De Sarkar Talk To The Man In The Hot Seat   |   Published 04.02.07, 12:00 AM

Life is not easy when you are heading a family that already has two towering patresfamilias. Still, Rajnath Singh — the president of the Bharatiya Janata Party (BJP) — is doing what he can. The shadows of Atal Behari Vajpayee and Lal Krishna Advani loom large over the 55-year-old former physics lecturer. But, with a few hesitant steps, Singh has been seeking to step out of the shade.

“They are my guides, my leaders. I will never ignore them. In a family, do children ever ignore their parents even after they have grown up and become independent? Never,” says Singh emphatically.

That both Advani and Vajpayee continue to prey on his mind became clear earlier this week when he announced his new team of BJP workers. Singh dropped Gujarat strongman Narendra Modi from the party’s highest decision-making body, the Parliamentary Board. And Arun Jaitley was removed as official spokesperson. Political observers found meaning in the moves: Vajpayee had an old score to settle with Modi — whom he tried, unsuccessfully, to remove as the chief minister of Gujarat after the 2002 riots. And neither was Vajpayee ever greatly enamoured of Jaitley, once close to Advani.

But Singh — who tries to answer tricky questions with a smile — believes that there is nothing controversial about his new team. “I have always consistently followed one style of working and that is working by consensus. I consult the maximum number of people, take their views and on that basis arrive at a decision by consensus,” he says. “But that decision is taken by me as the president.”

Singh’s elevation to the post of party president didn’t come without its share of controversy. Two years ago, Advani, as the then party president, was caught in a political storm when he made some candid remarks during a visit to Pakistan about its founder, M.A. Jinnah. The young Turks in the party were vocal in their criticism of Advani, who was finally forced to step down. Rajnath Singh — who had the blessings of the Rashtriya Swayamsevak Sangh, and the tacit support of Vajpayee — took over from Advani. And, by all accounts, it has not been an easy stint, with dissidents taking constant pot shots at Singh.

But Singh — sitting comfortably at home, clad as always in a crisp white dhoti and an off-white kurta — likes to stress that dissidence is a word that doesn’t go with the BJP. And, no, he doesn’t believe that the party, once known for its disciplined cadre, is now a hot bed of dissent. “The party is the way it always was,” he says.

And, publicly at least, Singh is all praise for Jaitley and Modi. “Modi is doing very good work — he has made Gujarat a model state. And Arunji is very talented,” he says.

Since Singh himself has always stuck to the straight path, dissidence is, clearly, something that he is wary of. He recalls the time when he first encountered angry dissent. “I had just been released after an 18-month stint in jail during the Emergency. The day after my release, I was given a ticket to fight the Lok Sabha seat of Varanasi on a Janata Party ticket. I was living in a dirty, three-room house those days. I was told over the phone to file my nomination.”

Singh did that, and started his campaign. At the last moment, though, he heard that his nomination had been cancelled. “One Fakeer Ali had replaced me,” he says. There were loud protests from lawyers, Singh says, and he was urged to contest as an independent candidate.

“I said no. If my party doesn’t want me to contest, I will not. I publicly declared that I would campaign for Fakeer Ali’s victory. And if any of my supporters worked against him, it would be like putting a blot — a kalank — on my forehead,” he says.

Singh’s political journey took off in the seventies, but the trigger was a political meeting addressed by Vajpayee in Mirzapur in Uttar Pradesh in 1969. Singh, then 18, volunteered to give a speech before Vajpayee came on stage. “I was greatly inspired by Vajpayeeji. And I liked the philosophy of the Jan Sangh, which spoke of an Akhand Bharat, a united Bharat which had no place for communal and casteist politics and corruption.”

Singh was those days studying physics. “I was a suited-booted man,” he says. His farmer father — “a pucca Congressman” — didn’t want his sons to join politics. But Singh, as the head of the physics society in college and the science association in Gorakhpur University, had begun to dabble in politics when he campaigned for a Jan Sangh candidate for the 1974 state assembly elections.

The vice chancellor of the university, C.B.K. Rao, was concerned about the direction he was taking. “He regarded me highly and said I was a good student and should join research.” With his help, Singh took up a lecturer’s job in Gorakhpur’s postgraduate college.

But politics continued to beckon. He became the Mirzapur district convenor of the Jan Sangh, and the Janata Party MLA from Mirzapur. He went on to lead the youth wing of the Jan Sangh, and was made education minister in Uttar Pradesh in 1991. In 1999, he was brought into Rajya Sabha and became the surface transport minister. He was in Uttar Pradesh in 2000 as its chief minister, and was back at the Centre as agriculture minister.

“In 2005, I became the BJP president. In 25 years, I rose from the post of the district president to an all-India president,” he says.

And from there? Has he moved on from the time when he was forever looking behind his shoulder to see what Advani and the RSS had to say about him? “The fault was in the eyes of the beholder. I had everyone’s total support from the beginning. My mandate was to take the party forward,” he says. “And it is moving forward. We were written off in UP but after our good showing in the municipal polls we are back with a bang. We are working silently and the BJP’s re-emergence in the UP assembly polls will be the subject of studies. Mark my words.”

But Singh does not believe that the verdict in Uttar Pradesh — the polls are slated to be held this year — will be a matter of life or death for the BJP. “It’s very important for the party. But life and death? There’s no death, there is only life and more life.”

Speaking of which, Singh says he is confident that in 2009, the BJP will form a government — on its own or in coalition. And who will head the coalition? The leader of the party, that is, Rajnath Singh? “On this issue, there is no dispute at all in the BJP,” he says.

So is he saying he will head it?