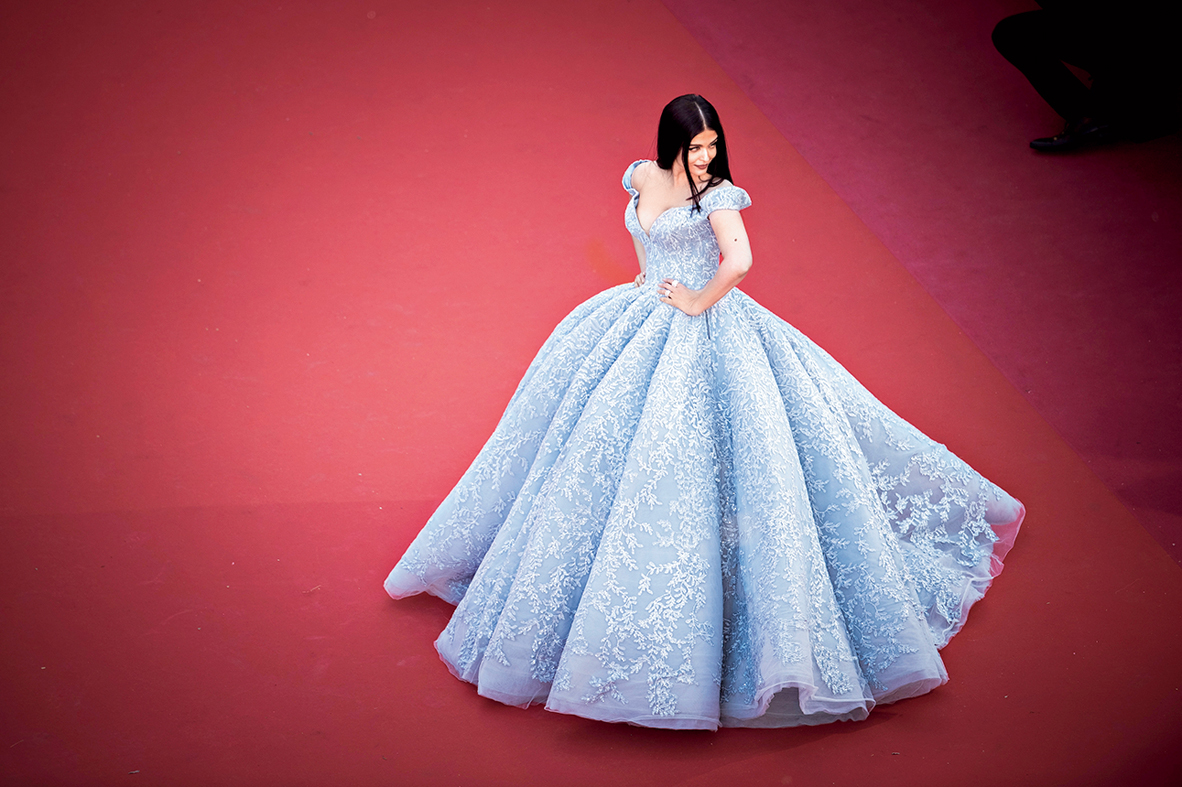 From the Neeta Lulla sari in 2002 for her debut at Cannes, it’s been a massive sartorial evolution for Aishwarya Rai Bachchan. From a leading actress in Bollywood to being married in the Bachchan family, being a new mother coping with weight issues to a super confident mom accompanied by her daughter — the Cannes red carpet has seen it all for almost two decades. Ash was among the first actresses who wore many Indian designers and then moved to top level international designers and had her fashion A-game strong. With her appearances mostly being synonymous with sombre beautiful, there were some surprises and shockers.

1. One of the looks that would forever be etched in our minds is Ash in the powder blue Michael Cinco gown in 2017. With a plunging neckline, the very billowy flair that looked straight out of a Disney fairy tale, she gave us major Elsa vibes and we are not complaining.

2. 2018 saw the former Miss World sashay down the red carpet in a dramatic purple sequinned Michael Cinco gown that looked like a butterfly and took 3,000 hours to create! From the sweetheart neckline, the intricate Swarovski crystals to the 20ft long train, every bit made her stand out, in style. Her hair and make-up only added to her beauty.v 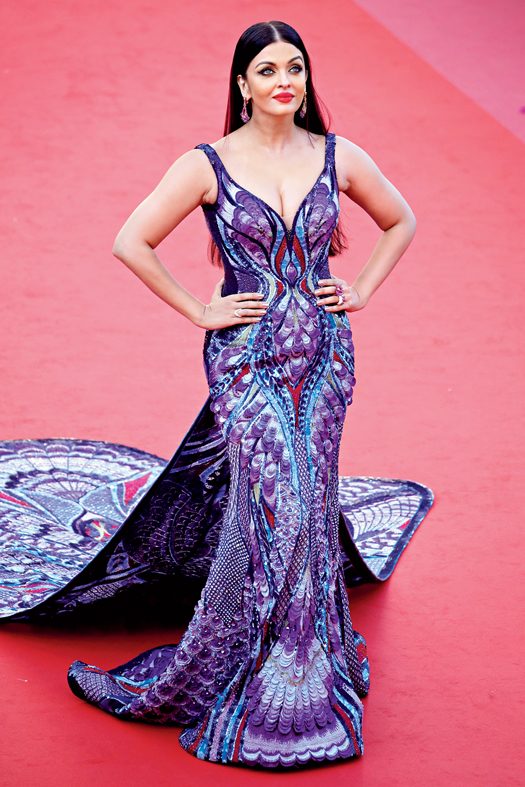 3. A red romance on the red carpet? Many would say nah and wouldn’t risk doing it, but Ash’s Ralph & Russo number, in 2017, was bold and beautiful. The actress looked ravishing in the layered, ruffled number, with dark lips, eyeliner on fleek and jewellery on point. The fashion police had no complaints.

4. Young, beautiful and full of charm — Aishwarya caught everyone’s attention in 2006 in a blue Elie Saab gown with side-parted hair and minimal make-up. However, it was her serpentine neckpiece that became the talk of the town.

5.Like many other actresses who have done a modern take on the sari on the red carpet, the light-eyed beauty, too, has rocked the nine yards many times at Cannes. Our fave pick would be the Sabyasachi saris that she wore in 2010. While the shimmery sari with a green choli was stunning, we also really loved the embroidered sari with signature Sabyasachi border that she wore with a boat-neck, black, full-sleeve blouse with floral details. The bouffant, kohl-lined eyes and nude lips — Ash was big on vintage Bolly glam.

6. Golden goddess! Yes, that’s what we thought of her in this Roberto Cavalli number, in 2014, that she matched with red lips, voluminous wavy hair, hint of shimmer and red nails. Stunning! 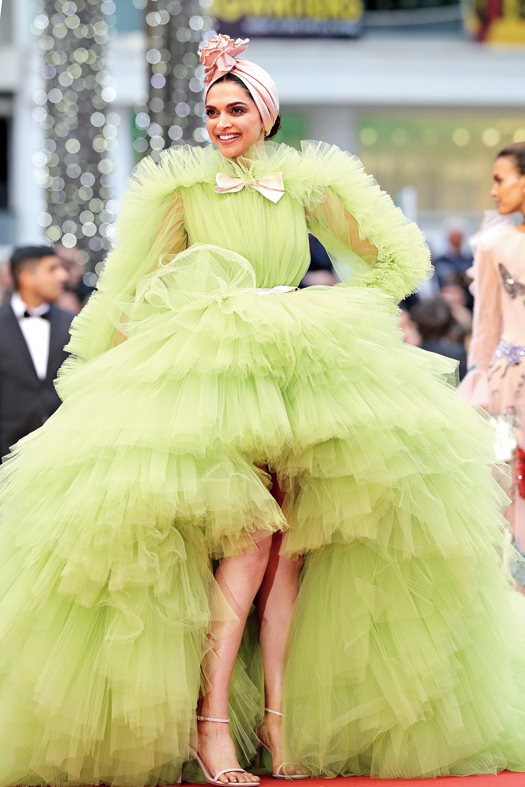 Being a die-hard fan of Deepika Padukone, I have always waited with bated breath for her Cannes appearances. And boy, did she impress! DP made her first Cannes appearance in 2010 in a Rohit Bal gold-and-white sari that met with mixed reviews, following which she had a remarkable sartorial transformation. In 2017 she was back and since then there has been no looking back.

1. In 2017 when she returned to Cannes as the L’Oreal Paris global ambassador, she opted for an oomph-y Marchesa gown whose sheer texture teased her fans without being too dramatic, and also had the wow factor intact. We loved the purple/aubergine shade on her, and those dark lips and loose wavy hair that amped the hotness quotient.

2. Among all her appearances, if there’s one outfit that defined subtle elegance, then it was this Zuhair Murad embellished number that she wore in 2018. Our Piku looked like a goddess in the sheer number that hugged her curves like a dream. The floor-length cape, side-parted gelled wavy hair and dewy make-up completed the look. Brownie points for going nude on her lips and not cluttering the look with too much jewellery. 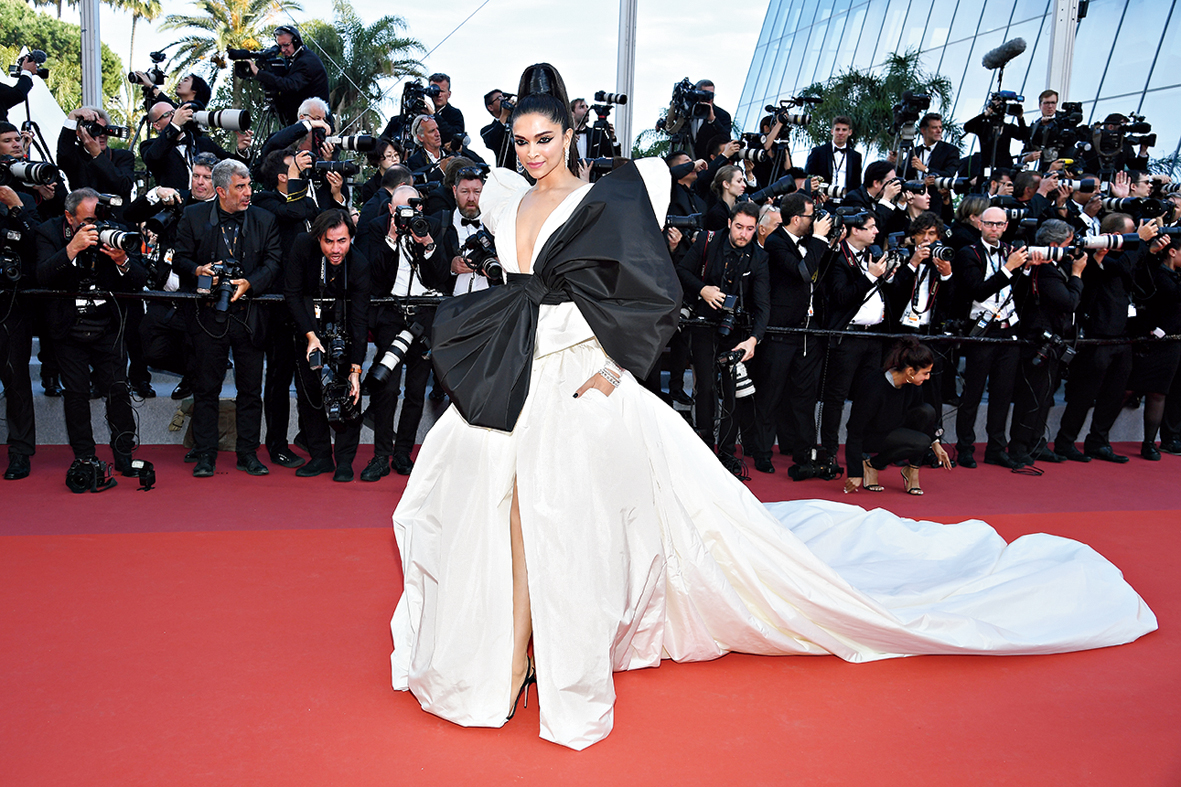 3. DP stunned everyone in this custom Dundas couture gown last year. The whole look scored on edginess — her exaggerated and bold winged pointy cat eyes, the sleek high pony and, of course, the oversized brown bow that stood in contrast to the high-slit ivory outfit. While the netizens were torn between calling it yay or nay, we totally gave her credit for trying something new on the red carpet

4. Deepika loves and rocks tulle like no one else! Case in point is her over-dramatic, stunning Giambattista Valli lime green gown with a massive train that she wore last year. In spite of so much happening all over the outfit — with that bow, belt and turban — DP oozed confidence and pulled it off with elan. Ranveer called it an “Insane” look while some memes were made too, but this definitely is one of her most striking appearances at Cannes.

5. When we think of Deepika at Cannes, the first image that comes to mind is her slaying in Ashi Studio’s ruffled fuchsia gown with exaggerated sleeves . We loved how she balanced the super dramatic outfit with a sleek topknot, smouldering eye make-up and those emerald drop earrings by Lorraine Schwartz that stood out due to the contrast. With her dazzling smile and inherent starry confidence, Deepika won the Internet. 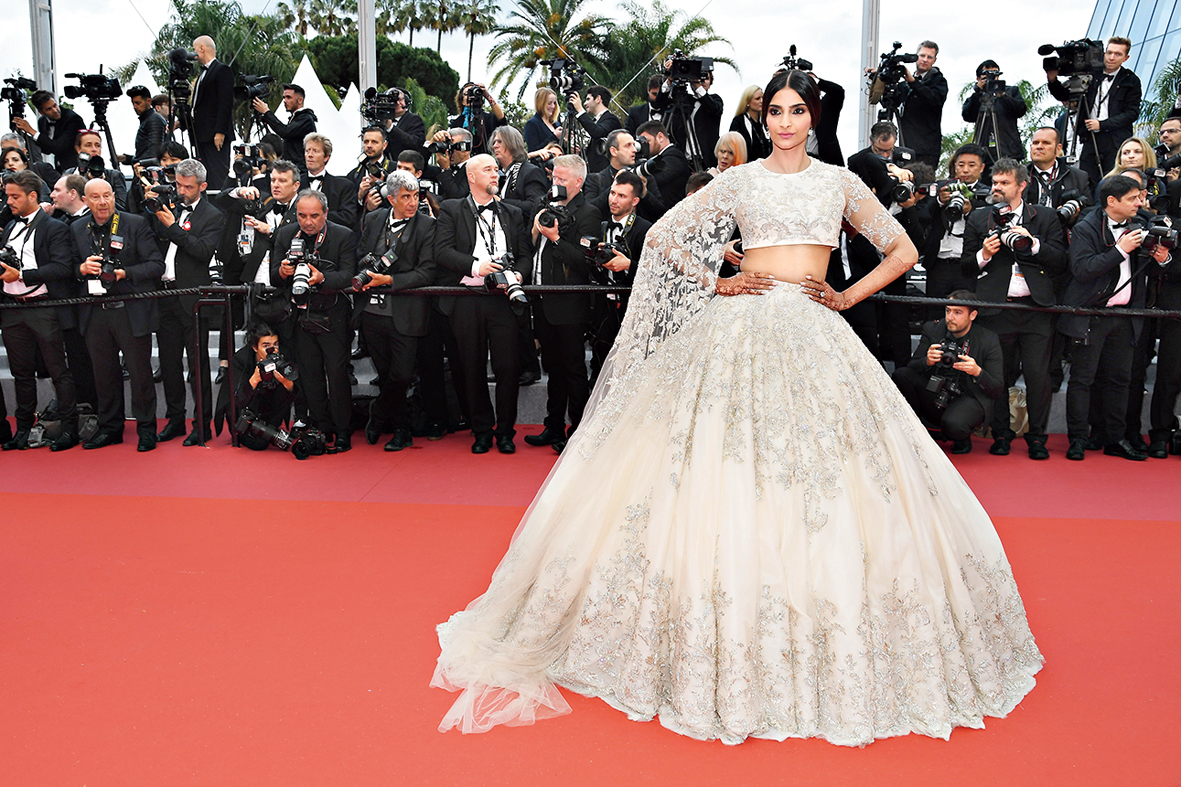 Bollywood’s resident fashionista, Sonam Kapoor Ahuja has owned the red carpet at Cannes for almost a decade now. The actress’s OOTD has only gone better with each passing year — we have seen her style range from avant-garde to princess-y to edgy. What we love the most about her appearances is her versatility and keen focus on adding certain Indian-ness to her look, be it with outfits by Indian designers or just adding a piece of traditional Indian jewellery.

1. Talking about Indian designers, who can forget her Anamika Khanna outfit that she wore in 2013 with that stunning nath? Anamika’s modern take on the lace sari with a long jacket was not to be missed, well complemented with oxblood lips, soft winged liner and loose plaits. A sartorial winner!

2. A blazer? A gown? Twitterati was abuzz with questions last year when the Khoobsurat actress looked every bit a shero in that pristine white Ralph & Russo number that the designer explained as a “custom asymmetrically draped Ralph And Russo tailleur featuring an overskirt with a two metre train”. The look was rounded off with layers of emerald neckpiece, kohl eyes, a sleek bun and strappy heels. With that plunging neckline, this was definitely one of the boldest and sharp look of hers. 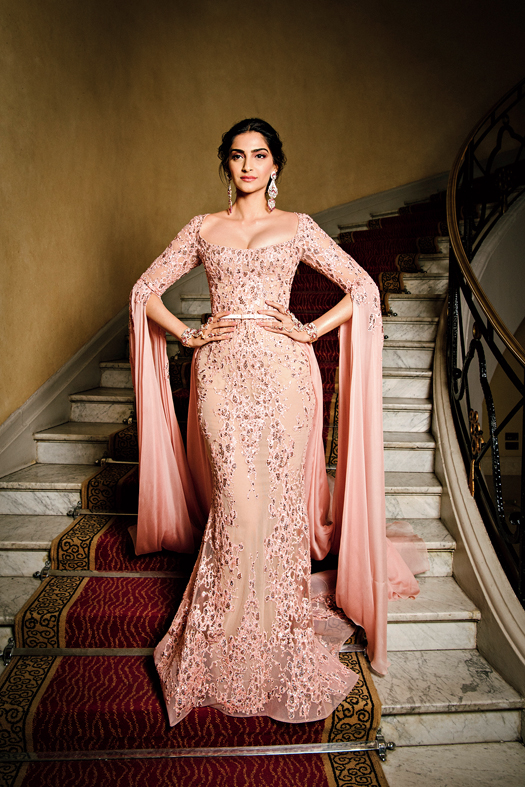 3. White and pastels have usually been Sonam’s go-to shades on the red carpet. Breaking that monotony, we loved her Elie Saab black gown in 2014, which she wore with faux bob, red puckers and chic diamond earrings that made her look so vintage glam!

4. The newly-wed actress with mehndi on her hands looked stunning in a custom Ralph & Russo billowy lehnga with a choli that had one short and one long sleeve, in 2018. She stole the show with her centre-parted braids that she adorned with a traditional parandi.

5. Sonam turned heads in 2017 when she looked pretty in a “rose blossom” Elie Saab number. The actress looked fresh as a daisy in the outfit that was well fitted, with flowy exaggerated sleeves and a small train. The detailed embellishments were beautifully balanced with the studded danglers and haathphool, blushed cheeks and pink lips. Subtle yet striking. 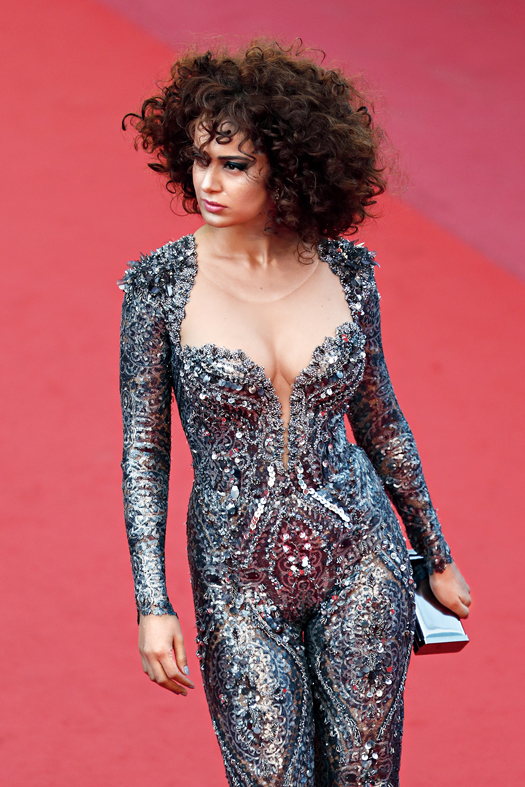 Eclectic, quirky and bold defines Kangana Ranaut’s fashion choices. The actress who made her debut in 2018 at Cannes Film Festival has been spotted in various fashion avatars. However, some of her best appearances has been off the red carpet — think the black Sabyasachi sequinned sari with the pearl choker for a retro feel; and the very daring and edgy pantsuit by Nedret Taciroglu for a Grey Goose (the brand she represents at Cannes) party. However, when it came to slaying on the red carpet, here are some of our memorable picks…

1.The sheer embroidered Zuhair Murad gown that she chose to debut in, made her look dreamy while her outfit played peek-a-boo, not revealing too much yet with a sense of mystery. Minimal accessories and barely-there make-up summed up a safe look that she confidently pulled off on the red carpet.

2. Some loved it, others hated it — Kangana went OTT in a sequinned and fitted catsuit. The super blingy outfit was matched with a silver box clutch, smokey-shimmery eyes and big curly hair. Also, who can forget her wacky poses on the red carpet? To rock a super metallic number with a disco vibe, you need a helluva confidence, which the Bolly girl never lacks, either on screen or off it. 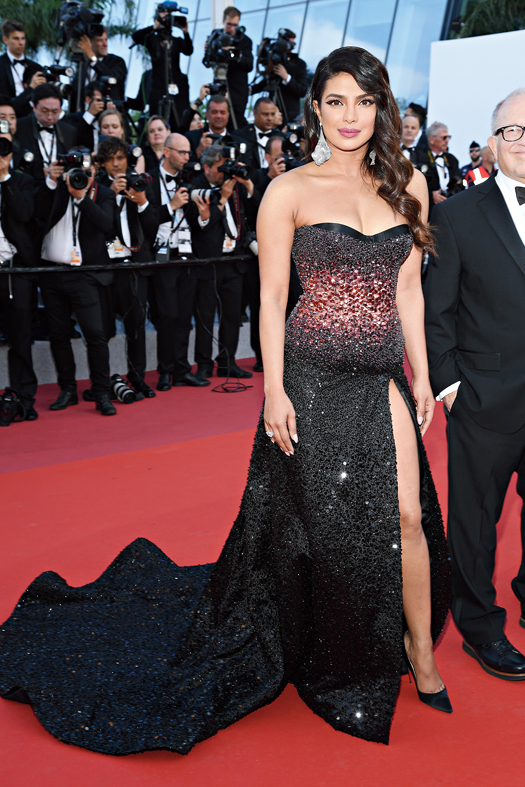 2019 marked Priyanka Chopra’s debut at the Cannes Film Festival. The global star dazzled in both outfits she chose to wear on the red carpet but we wish to see more of drama and experimentation from PC in future.

1. The Sky Is Pink actress looked like a vision in white in an elegant layered tulle outfit by Georges Hobeika that she paired with Chopard jewellery. The outfit was stunning and she amazed everyone with her charm, but we wish she had accessorised the look differently.

2. We cannot forget PC’s Roberto Cavalli black gown with a train and a high-thigh slit that got the temperature soaring. The studded glittery black off-shoulder ensemble with a dash of copper around her waist complemented her skin tone. Big ups to her cool eye make-up and side-swept beach waves.