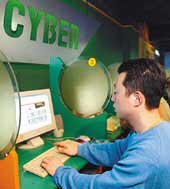 Finding love on the Net may be one of the most romantic things to happen to you. But discovering that your beloved is already married to someone else (and is hence an impostor) could be terribly devastating. And to help genuine love-seekers stay clear of deception on the Net, online dating service True.com has expanded its partnership with database providers Rapsheets.com to review public records and verify a web user’s marital status. If a user claiming to be single actually turns out to be married, the person is expelled from the dating circle immediately. True.com has also urged legislators to formulate laws that require all dating services to check user backgrounds. So the next time you meet prince charming or a damsel in distress on the web, just hope they are true as True wants them to be.

Ever sworn silently at a reckless driver cutting madly across traffic lanes, wishing you could give him a piece of your mind? The time has come to let your car take over. Four inventors working for Japanese automotive giants Toyota recently secured a patent for a car that they claim can actually express emotions! In an effort to help drivers communicate better with each other, the car comes fitted with an antenna that wags, adjustable body height, headlights whose intensity can be varied, slits on the hood and special accessories that are designed to look like eyelids and eyebrows. Effectively, it means that the car is capable of sneering at an errant driver, laugh or wink at him and even cry when wronged. In rather mundane situations, the car can, if nothing else, just look around. And on days when roadhogs are hard to come by, the lazy traffic policeman could just be in for a dose of auto wrath.

For those who swear by Manchester United, there’s news. The first video footage of the ‘red devils’ playing football, filmed 102 years ago by Sagar Mitchell and James Kenyon, is to be broadcast for the first time in a BBC2 series. The two-minute silent film takes the audience back to the club’s first season after it changed its name from Newton Heath to Man United. If and when you do manage to get a glimpse, have a ball.

It’s coming to a theatre near you, and this time, it’s going to sweep you off your feet like never before. Sholay, the rights of which are now held by Rehmat Enterprises, is all set to hit theatres in a new avatar on August 13. Originally released in 1975 as a 70-mm film with stereophonic sound, the Ramgarh saga has been upgraded to a cinemascope version with four-track sound. For Generation Next, it’s a great way to savour classic Bollywood on the occasion of the film’s 29th anniversary. Great balls of fire, is all we can say to that!

Goes to a group of 13 children, members of the Ryan Global Theatre Group of the Ryan International School, New Delhi, who are travelling to Japan to represent India in the Seventh Asia Pacific Festival of Children’s Theatre.