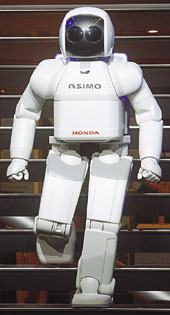 Talk about being in good books with robots! If a group of researchers at the University Jaume I in Spain have their way, the deployment of robots as librarians could soon be the norm at public libraries. The scientists believe that a library provides the best semi-structured environment where robots can interact with human beings, while keeping in mind (or is it the RAM?) several obstacles that have to be negotiated. The robots would come equipped with all necessary gadgets like cameras, sensors and grippers that would enable them to locate book stacks, read book titles and fetch books upon request. They could also carry out tasks like identifying missing books and mapping the library. But as for demanding fines for overdue books, the developers would like to leave the haggling to mere mortals!

Russian gangsters definitely have something to say — or shoot — when it comes to misrepresentation in the media. And having accused Russian TV of not portraying them in the right light, seasoned criminal Vitalij Djomocka recently created and produced a TV series which he believed would set the records straight! The screenplay for the show (a true story about the theft of an entire train carrying Japanese cars) was written by Djomocka himself, who then stepped into the shoes of the lead actor and urged other mobsters to play supporting roles in an effort to make the show as realistic as possible. The only actors in the production happened to be those playing the roles of cops! And for all their reel-life adventures, the mobsters seem to have made an impression: local TV stations have agreed to telecast the show in a few weeks’ time. No prizes for guessing if the police are tickled pink...

If only looks could kill. The US army plans to lure new recruits by promising them, among other incentives, cosmetic surgery on tax payers’ money! Anyone in a uniform would now be eligible to go in for breast enlargement, face-lifts, lipo-suction and nose jobs for free. But that’s not because the US army insists on having sexier people in its ranks. According to officials in the military organisation, the move would only help army surgeons hone their skills.

Bangla rock bands are all set to go global. UK-based television channel Channel S plans to produce a 52-episode documentary series featuring the guitar wielders from Bengal, keeping in mind the huge Bangladeshi and Bengali audience in England. For the rockers, it means quality exposure in the Mecca of rock and roll. Titled Band Padaye Chayer Dokan, the series is being filmed as adda sessions at a real-life tea stall, the owner of which doubles up as host for the show. The series is scheduled to go on air from November, so ask your cousins in the UK to keep an eye open.

Goes to a group of 14 aspiring scientists from the Thapar Institute of Engineering and Technology and the Buddha Dal Public School in Patiala, who recently won the NASA-Boeing space settlement competition held in Florida, beating seven other American teams.